Now Trending:
Spirituality in the City: Spring 2021 Edition
The Taste of Spring: Happy Pear Recipes to...
Supporting Community Wellness: We Chat to Health Stores...
Spirit-Inspired Creations by Tahnee Morgan (With an Amazing...
Our Spring Issue Hits the Shelves
Celtic Soul Journeys: A Conversation With Amantha Murphy
Seminars.ie Presents ‘Spiritual Health: The Next Frontier’ With...
Imagination Arises: A Conversation With Hema Vyas
Be Yourself Fearlessly: An Evening With Anita Moorjani
Cresting the Crypto Wave: Is Cash Still King?
Positive Vibes: The Spring 2021 Edition
Free Yoga Class With Outhouse and Nimble Limbs...
Bring in the New: A Nettle Ritual to...
Somega Boost: The Benefits of Liposomal Vitamin C
Sneak Peek: ‘The Realm of Imagination’ by Anna...
Sneak Peek: ‘Imagine Orgasm’ by Dawn Cartwright
Sneak Peek: Living on the Lawn by Hans...
Sneak Peek: Oracle Girl on the New Embodied...
A Closer Look at Some of CNM’s Upcoming...
Sneak Peek: Imagination Arises, With Hema Vyas
Turn Over a New Tea Leaf
Judy Satori – Becoming God/Goddess: Energy Alchemy to...
Positive Nights Presents: Oracle Girl – The New...
George’s Street Arcade Landlady Sends a Wonderful Message
EVENT: Bruce Lipton on Epigenetics and the Biology...
Home Positive News & Interviews I’ve Learned How Important It Is To Take Time For Myself.
Positive News & Interviews

I’ve Learned How Important It Is To Take Time For Myself. 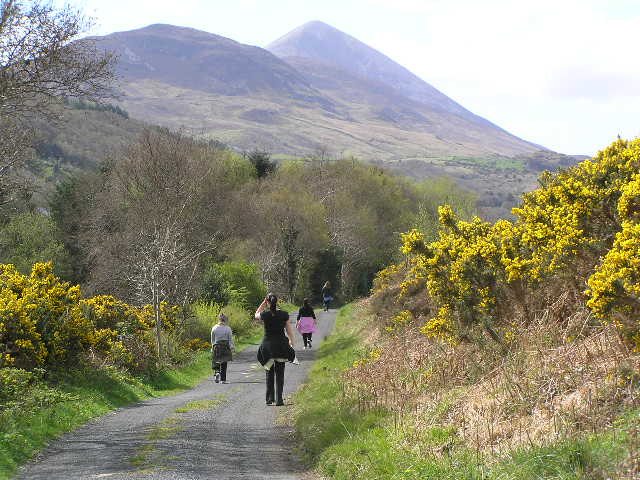 I was amazed when Paul from Positive Life rang me and told me I had won a free detox weekend at Cloona Health Retreat, about three miles from Westport in County Mayo.  I must admit that I had no idea that I had even entered a competition when I had submitted my online subscription to Positive Life a few weeks previously!

I checked out the Cloona website and liked what I read.  The accompanying pictures of the green Mayo countryside were also very enticing.  In fact the competition win had come at a perfect time as my life had been pretty stressful.  I really felt I needed a few days ‘off’.

Yet, feelings of apprehension began to creep in to my mind during my afternoon drive up to County Mayo from Dublin.  As well as the usual ‘no tea, no coffee, no alcohol’ and a diet of only fruit and vegetables, I had read that there was no television, no radio and that the use of mobile phones was frowned upon.

On arrival my first impression was that the website had done Cloona justice.  The centre is situated in a former woollen mill which was initially restored to act as a Buddhist retreat.  It is certainly a very calm place.

Dhara, the owner and manger, welcomed us all and invited us to drink a glass of soft water from Cloona’s own spring.  He emphasised to us how we should drink water at room temperature, about six tall glasses a day, and never with food (the extra liquid dilutes the digestive juices) – the programme had begun!  There were five in our group – Lesley, Erin, Catherine, Sandra and myself.  We had come from all parts of Ireland, including as far north as County Antrim.  Dhara briefed us about the programme, its ethos, and the activities.  The ‘smoking only by the entrance gate please’ was particularly pertinent to me, a smoker of 20 a day.  He preferred us not to use our mobile phones at all – but, if necessary, ‘please by the gate’ too.

Our first meal that evening was a plate full of various types of fruit – a banana, grapes, dried and reconstituted apricots, plus an apple.  Dhara had explained in his briefing that fruit is the easiest type of food for our systems to cope with as it only needs half an hour to be digested.  Vegetables take an hour and a half, while many foods can take much longer.  Consequently all our activities at Cloona had to take place at least half an hour after we had eaten so our energy could be concentrated on digesting the meal before we undertook anything else.

Our group was at Cloona from Thursday evening until Sunday lunch time.  On the Friday and Saturday the daily routine was similar.  The morning started with a shot of freshly juiced wheatgrass (definitely an acquired taste!) and then – half an hour later – we had breakfast.  This consisted of a ruby grapefruit and two oranges.  We were allowed to have apples if we didn’t wish to have the citrus fruit.  All, apparently, are good detoxing agents.

By 10.45am Catríona, clothed in orange, had arrived to lead the two hour yoga class.  As the session began we listened to the wind in the trees and the birds outside.  I’ve taken some yoga classes in the past that twisted my body into all sorts of contortions, but this was a milder form of yoga, the Satyananda tradition, which is a balance of breath awareness, movement and deep relaxation.  The sense of Catríona’s experiences of training in India seemed to be in the room with us.

Lunch was at one and, on the first day, there was a delicious root vegetable soup and two very large plates of salad for us to share.  One salad was avocado and cucumber, the other spinach with pine kernels.  Both tasted great!  We also had a bowl of alpha sprouts and watercress among us.

At two o’clock Dhara assembled us for the first of his guided walks.  Before we set off he gave us some tips on how to walk.  That first day he encouraged us to think about our shoulders and hips.  Then we set off, at our own pace, on an hour’s circuit through some of the beautiful country roads in the area with views of Croagh Patrick in the background.  Dhara preferred us to walk on our own so we could focus on the walking process itself, but I must admit I dawdled at the back chatting to Lesley that afternoon!

Back at the centre, after a couple of glasses of warm spring water, we could avail of one of the optional therapy sessions with visiting practitioners: Ger, Donal, Gavin, Lorraine and Marion.  I took reflexology the first day and had a facial the second.  There was also deep tissue massage and shiatsu.  Everyone related tales of good experiences and friendly therapists.

The evening meal was at six and again consisted of a large plate of mixed, uncut, fruit – this time with a few soaked almonds (soaked for a number of hours to release their sprouting nutrients).  A sauna was followed by a massage with yet another incoming therapist, the relaxing Anne.

I must admit I didn’t feel at all well on day one – Dhara said it was the detoxing process at work.  Several strong cups of coffee daily were being badly missed by my system.  By day two, however, I was starting to feel much better while, by the third and final day, I was on great form and felt a new woman!  The other four claimed they never felt ill at all!  On closer questioning I discovered they had all made an effort to drop coffee, tea, alcohol, sugar, salt and meat for the four days or so before they had arrived at Cloona – as advised in the leaflet – so the detoxing process was much less of a shock for their bodies.  Sensible ladies!

Sunday morning we were up earlier than usual in order that we could have our wheatgrass at 7.30am in time for our citrus fruit breakfast at 8.00am – so that the two hour yoga session could start at 8.30am.  At 11.45 we went for our walk.  At his briefing before this walk Dhara drew our attention to the movement of our backs (on day two, he had focused us on our feet, ankles and knees).  Again there were lots of lovely vistas, including several glimpses of the sea and the bay.

The final meal (for which we were joined by Dhara) was another delicious soup – red pepper.  This was followed by two more fantastic salads.  One was spinach with herbs and avocado, the other was grated carrot mixed with apple and lime.  During the meal Dhara explained how he tried to source not just organic but biodynamic food for the centre – food grown by organic principals but also according to phases of the moon and other earth forces.  Bizarrely I never felt hungry all the time I was at Cloona, despite the fact I appeared to be eating much less food than usual.

I asked the others what their key thoughts of their three days were – here are their words:
Erin: ‘I think my trip to Cloona has helped me de-stress, chill out a bit and has started the ball rolling for me to ‘clear the clutter in my mind’.
Sandra: ‘It was great to learn how to walk properly in such a spectacular backdrop’
Catherine: ‘I feel so much lighter in body and mind.’
Lesley: ‘I never felt tempted to eat the Kit-Kat I had smuggled in!’

I thoroughly enjoyed the three days.  The amazing location surrounded by lovely countryside with supportive and fun company made it very easy to relax.  I felt so far away from manic living.  I would definitely come back for the same again.  I especially enjoyed the tips on walking.  I feel so much healthier.  I left with my indigestion all gone and not feeling bloated at all.  I only smoked five cigarettes a day while I was there, I didn’t feel an urge to smoke more – maybe it was the change of routine?

The whole experience made me aware that what I am doing at home is not right for me.  I have learned how important it is to take time for yourself, i.e. yoga, walking.  My time at Cloona was all so beneficial.  In all I lost 5 lbs and I am now smoking outside my own house, something I have never committed myself to before.  I am a reformed character!

The After Life – What Happens When We...

Cornucopia’s Spring Recipe: A Spring in Your Spelt