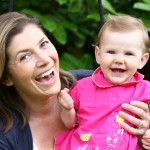 Thinking of becoming pregnant?  Whether you are just planning, expecting, or in the early months of motherhood, nutrition and whether you and your baby are getting all the relevant nutrients will be top of your list.

One mum who knows all too well the demands of pregnancy and motherhood is Nutritionist Louise Reynolds.  Being a mother of four children under the age of seven (including her latest little addition, Eleanor, of eleven months), Louise is well versed both in the theory and practice of good nutrition.

Louise comments, “Mothers can often worry about their diet, especially in the first few months of pregnancy if suffering from sickness, nausea and tiredness, whilst trying to hold down a job. During pregnancy, mum is like a store cupboard and baby just picks what he/she wants.  However, the store cupboard can run empty without mum realising.  That’s why it’s important to ensure you are getting a very balanced diet, not just for your child’s development, but for your own long term health.”

The most vulnerable period of neural development is during embryonic and foetal growth, and studies by the World Food Organisation show the best correlation with the diet of the mother was found at, or about, the time of conception, rather than later in the pregnancy.  Louise comments, “It is important to make sure you are eating the right foods when you are planning to have a child.  That way your body’s stores are full, to set you on the right road to motherhood.  However, with 50% of pregnancies being unplanned, this can’t always be the case!”

From a general perspective, Louise has some good practical advice on daily meals.  She advises, “A baby in the initial stages is just like a parasite which feeds off the mother.  Hence, it can often be the mother who suffers in the long term if her diet is unbalanced.   Most women will be aware of the basics, including topping up on calcium three times a day, ensuring you are taking a folic acid supplement and consuming iron rich foods.  I always advise to eat a rainbow of foods, meaning eat lots of different coloured foods, which will ensure mum receives a cocktail of nutrients. It’s nature’s way of ensuring you are on track!”

A study into dietary fat intake for pregnant and breastfeeding women published in the British Journal of Nutrition in 2007 showed that the essential fatty acids Omega 3 and 6, found in oily fish, must be deposited in adequate amounts in brain and other tissues during foetal and early postnatal life. The body cannot manufacture them, so we need to consume them in our diet.

Louise comments, “The Omegas 3 and 6 are important for the brain development of baby because 60% of our brain is fat!  The Irish Nutrition and Dietetic Institute (INDI) recommend that expectant mums should eat oily fish once a week or more.

However, some pregnant women may be concerned about the mercury levels contained in fish, as nearly all fish contain traces of mercury, which for most people is not a health concern, but which can harm an unborn baby or young child’s developing nervous system.

Those who don’t eat fish once a week can opt for a natural fish oil supplement such as Mumomega from Equazen, which is specifically formulated for expectant and breast-feeding mums to deliver the fatty acids they need.  Mums can also be sure that the formula is mercury-free.”

Midwife Doreen Buckley of Senecio Birth holds Antenatal Classes and Early Parenting seminars each Saturday in Leixlip.  Doreen comments, “I encourage mums to really get in tune with themselves throughout the whole pregnancy process – Birth is the strongest natural force of energy a woman will experience in her lifetime.  It’s important that she is in harmony with her energy and to achieve this and the optimum birth experience, good nutrition is absolutely essential … I always remind mothers, if they don’t put petrol in their car, it won’t go!”

To find out more about Omega 3 and 6 for pregnancy and Equazen’s Mumomega, log onto www.equazen.co.uk

How Could We Imagine We Are Anything But...