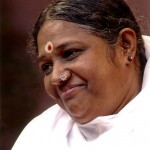 “Love is the only medicine that can heal the wounds of the world.”, says Amma, known to many as the ‘Hugging Saint’. Speaking to a journalist while holding an elderly lady in her arms, she continues, “There are two kinds of poverty in this world. One is financial, the other is due to a lack of love. This second kind is more basic. Love is what sustains life, it nourishes the entire being.”

Offering this nourishment without exception to everyone in the form of a simple hug, Amma seems to have tapped into a deep, essential human need. Wherever she goes, people queue up in their thousands to receive her embrace.

Knowing Amma for over a decade and having witnessed her countless acts of love and compassion, it is difficult to hold back my admiration. To simply watch Amma greet every person for hours and hours on end with the same unconditional love can be a powerful experience.

While it might be difficult for the mind to grasp why she is doing this – hugging people, day after day, year after year, an estimated 27 million in the past 3 decades – something deep in the heart spontaneously responds. A shell breaks open, frequently resulting in unexpected tears. “It is as if many people have forgotten an old song”, Amma says, “and I try to help them remember it: the song of love, the language of the heart.”

While hugging is the trademark that made Amma famous around the globe, there is more to this tiny, unassuming woman with the radiant smile. In recent years she emerged as one of the greatest humanitarians of our time, spearheading an ever-expanding charitable network, probably the biggest ever initiated by a single woman.

Accredited ‘Special Consultative Status’ by the United Nations, her mission helps millions of people in need, regardless of religion or social class. Apart from deploying massive disaster relief efforts, Amma has – amongst countless other projects – founded hospitals and clinics, pension schemes, schools and colleges, adult training centres, and even built entire villages for those most in need.

She spreads her message through the example of her own life, rather than through words, and the utter devotion with which she lives that example is inspiring people of all walks of life to join hands in the service of humanity.

At her 50th birthday celebration in 2003, the President of India, together with other politicians, business leaders and religious leaders of all faiths joined in a prayer for world peace and pledged to support her endeavours.

To many, to be in Amma’s presence is simply to experience the best that life has to offer.

Rude Health at the RDS

Taster session for Awakening the Illuminated Heart® with...

Believe It or Not

Christmas Gift Tip: If You Have to Buy...

Healing the Hidden Triggers: Why Children Push Your...