Now Trending:
Spirituality in the City: Spring 2021 Edition
The Taste of Spring: Happy Pear Recipes to...
Supporting Community Wellness: We Chat to Health Stores...
Be Yourself Fearlessly: An Evening With Anita Moorjani
Our Spring Issue Hits the Shelves
Hugh & The Manatee: Mary Helen Hensley’s New...
Celtic Soul Journeys: A Conversation With Amantha Murphy
Seminars.ie Presents ‘Spiritual Health: The Next Frontier’ With...
Imagination Arises: A Conversation With Hema Vyas
Cresting the Crypto Wave: Is Cash Still King?
Positive Vibes: The Spring 2021 Edition
Free Yoga Class With Outhouse and Nimble Limbs...
Bring in the New: A Nettle Ritual to...
Somega Boost: The Benefits of Liposomal Vitamin C
Sneak Peek: ‘The Realm of Imagination’ by Anna...
Sneak Peek: ‘Imagine Orgasm’ by Dawn Cartwright
Sneak Peek: Living on the Lawn by Hans...
Spirit-Inspired Creations by Tahnee Morgan (With an Amazing...
Sneak Peek: Oracle Girl on the New Embodied...
A Closer Look at Some of CNM’s Upcoming...
Sneak Peek: Imagination Arises, With Hema Vyas
Turn Over a New Tea Leaf
Judy Satori – Becoming God/Goddess: Energy Alchemy to...
Positive Nights Presents: Oracle Girl – The New...
George’s Street Arcade Landlady Sends a Wonderful Message
EVENT: Bruce Lipton on Epigenetics and the Biology...
Home Positive News & Interviews Is there a ‘bed of nails’ for everyone?
Positive News & Interviews 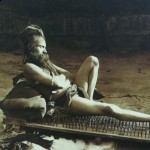 Looking for an interesting way of relieving your tensions, aches and pains while achieving a deep state of relaxation at the same time? How about lying on a bed of nails? In use for thousands of years and found in many traditions across the globe, it seems to be a very simple tool that can have an amazing effect on your body.

So what is it and where does it originate from?

The bed of nails is an ancient tool that has its roots in Indian mysticism. It was used by Yogis to release blockages; physical, emotional and mental. Some early users were also identified in China and later users are recorded in Russia, the Stan countries and in Eastern Europe. There is even a Sami tradition of lying on a bed of juniper bushes to achieve the same effect.
From a western perspective, the bed of nails got much notoriety in Russia during the 1970’s when it was developed as part of the Russian space programme but later came to be used, and indeed was officially sanctioned for use, in Russian hospitals.

Even today an adaptation of the bed of nails can be found in the standard first aid kit in Mongolia and some parts of China.

Closer to home, the bed of nails concept emerged again in the past few years in Scandinavia, this time on a mat with plastic spikes instead of nails.

How does the mat work?

There are 6210 points of contact, placed in a special geometric pattern on the mat, that help stimulate the acupressure points of the body. This stimulation promotes increased blood circulation which enhances your body’s uptake of oxygen. This in turn transports toxins away from your body and strengths your body’s self-healing processes in a natural way.

What is it good for?

Pain relief or relaxation, or both at the same time. The use of the mat can help to release endorphin and oxytocin. Endorphin is one of your body’s most powerful hormones for pain relief. A release of endorphins can make you feel energised. Oxytocin on the other hand is known as your body’s calming hormone, which helps you to relax and provides that deep feeling of well-being. In particular, the mat can be of benefit when suffering from low energy levels, stress, insomnia, tension, migraine, back pain and much more.

Has there been any research done?

A research paper from the USA, by Tanya Zilberter, PhD was presented to the International Symposium on Integrative Medicine (May 26-28, 1999, Omega Institute, NY). It showed very positive results. The study focused on the use of the mat for five categories of ailments. The key question asked was “Did you experience any positive effects using the mat?” Out of 126 subjects, the response was as follows:

Other unsubstantiated and unpublished research supposedly done in Russia during the 70’s made many amazing claims, among others that it helped with depression, it increased empathy and reduced aggression levels. It was interesting but unfortunately unpublished research.

The Irish ‘bed of nails’

Noel and Joanna from Mandalamat™ were the first people to design, market and sell this new type of nail mat in Ireland. They sold their first mat in early 2008, just after it started to appear in Scandinavia. In mid 2009 they finally decided to focus on it full-time. They formed a company and embarked on a marketing campaign to make a broader audience aware of the benefits of the Mandalamat™.

Noel and Joanna are looking for help in this endeavour, so if you’d like to become an agent/reseller for Mandalamat™, or if you simply want to know more about the mat, contact them by email at noel@mandalamat.ie or joanna@mandalamat.ie or call them on either 012148946 or 0857611811

Positively Newsworthy: Straight Up Chillin’ for Your Brain

The Wisdom of Adamus: An Interview with Geoffrey...