Niamh Hooper talks to Eckhart Tolle who is author of the bestselling book The Power of Now, and world-famous spiritual teacher. At the age of 29, a profound inner transformation radically changed the course of his life. Here, he shares his story. 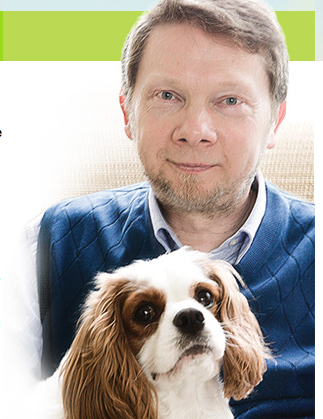 CHARISMA is a curious thing – magnetic, inspiring, unforgettable. In today’s world, an obvious holder of that certain ‘je ne sais quoi’ is Barack Obama; a not-so-obvious one is a little Yoda-type character with a shining presence and a soft snorting chuckle who also casts a spell wherever he speaks.

Organisers say his Irish talk to an audience of over 1,000 could have sold out three times over, he was in such big demand. And since then, so impressed was Oprah by him that they did a 10-week webcast class together, tuned in to by millions.

A spiritual guide of our time, Eckhart Tolle is a master at getting people to see how often they spend their lives ricocheting from thoughts of the past to plans for the future without stopping to embrace that thing called the present. As he puts it: “There is only one moment and it’s always now”.

At 60, Tolle has a gift of reducing life’s complications to more digestible bite-size morsels – which probably goes a long way to explain why his book The Power of Now has been translated into over 30 languages.

But it wasn’t always that way.

Born in the village of Lunen in Germany, Tolle’s upbringing wasn’t conventional. At 13, he left school rather than study things he didn’t enjoy. And when his parents divorced, he went to live with his father in Alicante, Spain where his first jobs included being a tour guide and translating restaurant menus. At 18, he moved to England, studied for his O and A Levels at night and went on to graduate from the University of London with a first class degree in languages and literature. Throughout, he was driven by the need to succeed, while vacillating between anxiety and suicidal depression. “I felt lonely and not good enough, I wasn’t good at relating to the opposite sex and was worried about not fitting in.”

“One night, my unhappy self dissolved and the next day I woke up totally at peace. Externally nothing had changed, yet everything had,” he smiles. “In the middle of the night I was woken up with a dreadful anxiety and I thought ‘I can’t live with myself any longer.’ It was as if there were two of me – the ‘I’ and this ‘self” that I cannot live with. As I looked at the structure of the sentence it produced a dizziness, a vertigo – in that moment something was dying. I didn’t know what was happening at the time but now I realise it was my unhappy, mental, ego-created self dying, and the ‘I’ is consciousness itself.”

Some time after this “inner transformation”, Tolle changed his first name from Ulrich to Eckhart following a dream in which he saw books lying around. On the cover of one was the name Eckhart and he knew he had written it. By coincidence, he bumped into an acquaintance, a psychic, a few days later who, for no apparent reason, called him Eckhart! Having become a completely different person he was ready to relinquish the name Ulrich and the unhappy energy the name held for him.

Although Tolle’s own awakening happened overnight, for most the shift from being anxious or depressed to being totally at peace – which he describes as the disintegration of the ego – is a more gradual process. On the road to freedom, he believes, the first step is realising that the voice talking in your head is not you. “When you learn to disidentify with these thoughts in your head, the consciousness that arises is a deeper awareness, a deeper connection with a timeless essence.”

Today the life of this former recluse is utterly transformed as he travels the world sharing the joy of living in the present moment and how that might best be achieved. “As you wake up, life loses its seriousness and heaviness. When the ego no longer has you in its grip, life is more playful and full of laughter,” he says, a ray of sunshine packaged in an unusual-looking man dressed in an earthy toned checked shirt, buttoned-up cardigan and cords. This lightness, dry humour and how at ease he is with himself leaves an indelible impression.

The author of three books – The Power of Now, Stillness Speaks and his latest A New Earth – it has to be said Tolle is the most unlikely of public speakers. Rather than actively engaging his audience by pacing up and down a stage, he is primly tucked into a big armchair. His quiet slow delivery of speech punctuated only by his unusual little soft snorting chuckle. An infectious chuckle that’s heard far more than expected in both public talks and this rare interview.
And as for what he is going to speak about, he never knows ahead of time – instead he lets it arise in the moment.

All these things considered, it shouldn’t really work, but it does. It may have something to do with the fact that while the content of Tolle’s books is serious, the man is anything but. He did enough of it in the past, he laughs. Whether on stage or on a one-to-one, Tolle’s conversation flows fluidly from one idea into another without a hiccup. The answer to one question can cover many areas. Like, for example, when addressing just how practical it is to always be in the present moment if a person needs to make fundamental life changes.

“On the simplest level when driving from point A to point B, many people get stressed because they project themselves forward in their mind to where they need or want to be. All the intervening time of travelling is spent in a state of stress, anxiety, impatience or anger because they are not fully present where they are,” he says. “When it becomes a mental pattern as it does for most people, wherever you are you are never fully there because when you get to point B you’re already projecting where you want to be next. If you reduce all that there ever is – which is now – to a means to an end then the whole quality of your life deteriorates and becomes dysfunctional.”

He does, however, talk of the importance of ‘clock time’. “You can use your mind if you want to creatively imagine where you want to go. You focus your mind to see how can I get from here to there and what steps do I need to take. This is the use of time on a practical level and we can’t do without that.”

Bringing it back to the person who is not happy with what they are doing, he advises them to be very careful not to generate resistance to the present moment. “While knowing you want something better for yourself, you can still, for that moment, internally accept this is how it is at this moment. In other words, you don’t generate negativity, opposition or unhappiness inside yourself and you do not fight life. The action generated from this place is far more powerful because it is not contaminated with negativity.

“For example, if you are angry about being poor, you might get rich because you work very hard and want to prove to the world that you can make it. But, even if you do get rich, you won’t be happy because the whole action will have been generated out of anger. You can also take the step from being poor to rich by not accepting ‘I’m poor’, because that is just a story, but by accepting ‘I have very little in my bank account’. Many people who have practiced this have told me their life changed the moment they no longer face the present moment from a place of opposition, of resistance. It doesn’t mean you get stuck with where you are, in fact change is easier when, first of all, there is an inner state of ease at what is and there is a flow and acceptance,” he says.

Asked if he had only one piece of advice to dispense what would it be, his answer is simple: Make the present moment into your friend. “Whatever stands in your way is the way. If you can welcome the form your life takes at this moment, the entire structure of ‘should’ goes out the window. And the miracle is when you totally accept the form of this moment, it changes for the better.”

“Even better”, he suggests, “accept this moment as if you had chosen it. How would you approach this unpleasant person or situation if you had chosen it to be this way? You would be in alignment. What if I’d asked this person to be difficult just to give me some practice. Everything becomes practice. You would see every condition in your life now as happening to help you transcend the condition. Transcendence is an inner phenomenon and goes beyond conditions. Who you are is not touched by conditions”.

“After all, in the end”, he says, “your life only amounts to a two inch dash.  All your striving to achieve, the struggle and the searching for the perfect partner, ideal career and dream life is encapsulated in a two inch dash between your date of birth and your date of death on your grave stone. Contained therein are the dilemmas of a person’s entire life”.

*Eckhart Tolle’s latest book, A New Earth is published by Penguin. His talk in Ireland was presented by Seminars.ie

CDs & DVDs by Eckhart Tolle are available to order online at www.eckharttolle.eu

Deepak Chopra, Meditation & How to Find the Leader Within

I never cease to be in awe of Echart. His words are like balm on a sore. Thank you so much for all the goodness and gentleness you bestow to me and to all who have the good fortune to hear and “get” what you are saying. Namaste.

Please could someone put me in touch with spiritual guides in South Africa?

NAMASTE!
May the journey of each soul enlighten those they meet along the way…..and may their path be smooth, unhurried and embraced by “WU” that “nothingness” where creation happens and life is.