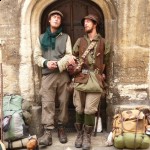 The Hills are Alive with the Sound of Will and Ed

Will and Ed, from Kent in the southeast of England, are on an unusual mission. Setting off from Canterbury in February, the twenty-somethings have been walking around Britain, singing traditional folk songs ‘for their supper’.
“We are singing for our supper… learning about this land, about the people that live and work here, the histories that have formed it, the cultures that have gone before… and that remain.”
In this age of hyper-quick travel and urban pop, the question is why? “It just feels sensible,” explains Will. “Walking defines our bipedal species. A walk has cumulative benefits – the sum of every step, everyday. The changing landscapes keep our minds fresh.” Ed continues: “Being on foot lets us learn deeply about this land. As the landscape folds outward, the grey doorways open inward.”
Will and Ed are learning nomadic skills – edible and medicinal plant lore, local history and culture. To pay their way, they sing traditional local songs, which are gathered as they walk.
“The songs seem to rise through us, from the soil beneath our feet. They want to be released, freed to the winds, given to new ears and hearts,” Ed says. “The lyrics concern day-to-day subjects. They are from our ancestors’ experiences of living and dying on this land,” adds Will.
“We’re invited into houses, schools, barns – we’re fed, clothed and watered. Our faith in Britain is constantly refreshed and reborn.”
Will and Ed are continuing to walk and sing around Britain for the foreseeable future. “What else could there possibly be to do?” they both laugh. “We’re just expressions of a very ancient and open way of life. It is free for the dream and all are welcome.”

You can catch up with Will and Ed through their website: www.awalkaroundbritain.com

In a new book, ‘Nature’s Playthings’,  the author Alison Wilson Smith takes us on a trip down memory lane – a time when children walked to school, climbed the neighbours’ trees for conkers, entertained themselves outside all day and puffed on dandelion clocks to prove that it wasn’t yet time for bed.
When Alison Wilson Smith decided to write a book about the joys of playing freely outdoors, as she did as a child in the 1940s, it seemed a timely proposal. Now appears to be a particularly good time to recall the days when children could walk alone to and from school, and entertained themselves with whatever the seasons provided, from trees to pebbles, conkers to running streams.
‘Playing – particularly unstructured and loosely supervised activity outdoors – is vital. It develops the child’s physical co-ordination, facilitates social development, such as making friends and keeping them, coping with problems and working collaboratively. It also cultivates creativity, imagination and emotional resilience. This includes the growth of self-reliance, independence and personal strategies for dealing with any challenging and traumatic experiences.’
Now a grandmother, she recalls her own childhood to inspire this generation to play outdoors, to learn the rules of conkers, the joys of making leaf-boats, flea darts, grass whistles, daisy chains, poppy dolls and more. This practical and lively book will remind parents, grandparents, childminders, schools and playgroups, how to inspire young people to get outside and enjoy nature’s playthings.

More than 6,000 children gathered to fly their homemade kites on the beach near the city of Beit Lahiya in Gaza.  The activity symbolized Peace and Unity, and was actually a genuine Guinness World Record attempt. The challenge was to simultaneously launch 5,000 kites into the air for at least 30 seconds, to break the previous record of 967, set by Germany.  The children, media and spectators were not disappointed – an estimated 4,000 kites soared into the sky, high above the heads of the crowds, amid joyous cries of record-breaking excitement.
Nearly 250,000 young people participated in the United Nations ‘Summer Games‘ programme, with many local teachers giving up their holidays to help run it. The initiative is organised to restore hope and normality to the war-torn territory and foster a positive summer experience for Gaza’s children.  This year’s activities range from sports to theatre, traditional Palestinian folk dancing, arts, crafts and swimming.

Palden Jenkins started supporting the Hope Flowers School in Bethlehem through his role as web creator and as a member of the Jerusalem Peacemakers – a network of independent, interfaith, peace builders. The school was founded in 1984 and has become a centre for democracy and peace education. Palden has been helping to rebuild their website and is assisting in the development of an English language out-reach programme. He is also working with six other villages, giving psycho-spiritual support to community workers and encouraging people to reunite.
Palden’s aim is to collate the school’s experience and take it to other areas of conflict worldwide. “Hope Flowers has the world’s most advanced knowledge in trauma recovery, conflict management and community development,” he says. “It’s a tremendous resource.”
Recording his observations in a blog online, Palden is heartened by the warm welcome he has been receiving. Noting a powerful sense of community, selfless mutual support and genuine desire for peace, he writes: “This is indeed a holy land: scintillating, energising, enlightening, yet tragic, contradictory and rubble strewn. Despite its bizarre, challenging aspects, it’s a remarkable place to be.”

A revolutionary solar aircraft, designed to fly continuously without fuel,  even at night, has just been unveiled by two renowned adventurers.
Bertrand Piccard, who set a world record with the first non-stop round-the-world balloon flight and André Borschberg, an engineer and pilot, will make history by flying a piloted, solar-powered craft right round the world. “Yesterday it was just a dream. Tomorrow it’ll be an ambassador of renewable energy,” Bertrand declared.
The Solar Impulse should make its first test flights by the end of 2009, while a complete night time flight is planned for 2010. The results will be used to develop a second aircraft. Scheduled for 2012, it will circumnavigate the world in five stages, each lasting for several days and requiring the pilots to swap. “The plane could do it non-stop theoretically but not the pilot,” Bertrand told the BBC.
People wanting to follow the adventure can enrol to receive news alerts, adopt a solar cell, book a VIP visit at the Solar Impulse base or even put their names on the aircraft’s fuselage.

Many Layers of Green Energy

Steven Gill and his brother David have been cultivating and processing onions for 25 years, but now, they have taken the lead when it comes to green energy. The growers, who employ over 400 people, are no longer throwing away the excess tops, tails and peel. Instead, they have found a unique way to convert the waste into energy: a fuel cell power plant that runs on onion juice.
True to the company motto, Waste Not, Want Not, Gills squeeze every last drop out of every piece of peel, converting it to biogas and then using it to power the processing facility. With their state of the art anaerobic digester, Gills have been cutting their greenhouse gas emissions by 30,000 tonnes a year – the equivalent of taking 5,000 cars off the road.
Gills, who recently earned recognition as a Cool Planet Project by The Climate Registry, continue to find ways to make the company greener. “Achieving zero waste and improving water conservation are both achievable goals,” says Steven Gill. “We’re excited about our future.”

The Wynne and Thorp Technique

The Wynne and Thorp Technique

Stargates: A New Path to Awareness by Prageet...