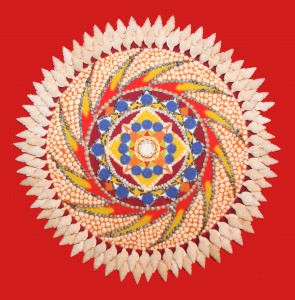 I’ve always liked the notion that the world we experience ‘outside’ is completely interconnected to the state of consciousness we have cultivated ‘inside’.

But a while ago I hit a stumbling block. Even though I fully believed in this concept, it was still just a theory for me. I longed to know how exactly do we raise our consciousness? In an age where there are literally 1000’s of meditation techniques and belief systems to choose from – I found the whole area baffling.

Then I stumbled upon Mandalas, and in all sincerity, my life has never been the same since.

From the moment I began constructing these geometric shapes, an opening occurred. I began to experience firsthand a new depth to my life.

For example, on one occasion I felt a very real presence (nothing spooky now). It was more like the presence you might feel while taking in the view from the top of a mountain on a clear day.

Then, gently, I felt a kind of learning occur. It simply highlighted how, up until then, my default settings for being in the world were entirely focused outward… on the external. As this inner lesson continued, I began to listen and surrender a little more to this presence; imbalances operating in me became exposed and a far vaster experience of reality was revealed.

Mandalas work on the principle of ‘like attracts like’. The geometry of the shapes reflect certain states of consciousness. When you create these sacred circles, or meditate upon them, you are tuning into these higher altitudes. By simply ‘being’ in these realms, you acquire, by similitude, the properties held within them.

Kundalini Yoga in the Dawn of the Aquarian Age

Meditation for a Calm Heart

Ayahuasca Retreat – A Tale of The Vine...