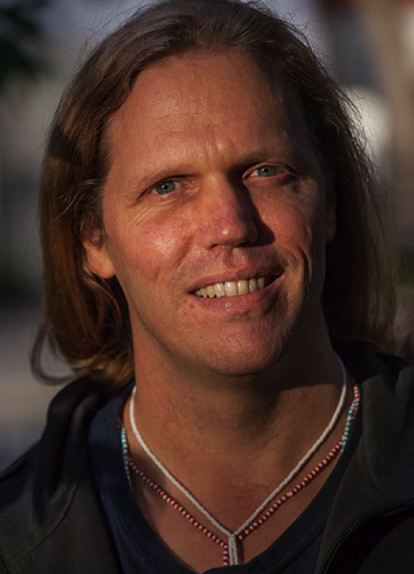 John Lockely is a traditional African shaman, known as a Sangoma (medicine person). He comes from the same tribe as Nelson Mandela, but his Mum is Irish and he refers to Ireland as his second home. He spoke to us from hot, noisy New York City, to tell us about his work, his journey and the joy of working as a catalyst to helping people discover and realise their dreams.

For three to four months of the year, John volunteers in his community at home in South Africa. He describes his work there as being like a nurse to the elders, ensuring they are well so that they can continue to help others throughout the year. The rest of the time he spends travelling Europe and the US, teaching people to live with the instinctual intelligence of a leopard in workshops, healing in one on one sessions and giving public talks or blessing ceremonies.

Through dreams, John was called to become a Sangoma at 17, but it was a long path before his training as a Sangoma began. He first trained in the medical corp of the South African army and worked in one of the best hospitals in South Africa. There, he discovered that black soldiers’ bodies healed about three times faster than the average soldier and he began to learn more about the African culture of healing. The secret? John says they understand and connect with the whole circle of life, from birth to death, their ancestors, their bones and their hearts.

They do not fear death in the way we do. Along with John’s traditional medical beginning to his journey, he also has two degrees in psychology and has studied yoga and Buddhism, all of which compliment and enhance his work in beautiful and practical ways.

Meditation in Motion – Gently move into the power of now. By Patricia McNally

Gut Instincts: The neurological pathways in your stomach. By Philip Shepherd

Living in an Eco Neighbourhood – The Cloughjordan...

Alignment in Wicklow: Help on the Road to...

NPA: A Gateway To Intimacy. How Non-Personal Awareness...

The Glorious Climb Back Into Our Bodies

The Wisdom of Adya: Opening up and Embracing...