Now Trending:
Focus on the New: Connection and Communities
Editor and Social Media Manager Wanted
Meditation Myths and Truths: Set Yourself Free
Haven of Healing: Creacon’s Autumn Retreats
Positively Newsworthy: The Autumn 2021 Edition
A Vedic Astrology Forecast for 2022 With Drew...
The Wisdom of Trauma ft. Gabor Maté: Online...
Four Noble Truths: A Buddhist Response to the...
Water for the Soul: Restore Vitality to Your...
Positively Newsworthy: The Little Things – Autumn 2021...
Go Beyond Words: The Truths Behind a Child’s...
Rachelle Hicks: Own the Sword, Accept Your Power
Find Your Truth: What is Your Perspective on...
Make Your Sunshine Last: CNM on Vitamin D
Accelerate Your Path: We Talk to Dr. Joe...
Bringing Galactic Wisdom to Earth: A Conversation With...
A Neuro Boost: The Health Approach of Mindbodied
Vital Nutrients: The Journey That Birthed a Business
Get Unstuck and Thrive: The Power of Energy...
Embracing Autumn: Welcome the Incoming Energies
The Wonder Nutrient: A Look at Coenzyme Q10
Higher Creativity: Artwork in Service of Healing
Warm Indulgence: Enjoy Autumn Comfort From The Happy...
Charlotte’s Creations: Clothes Made With Love
Teen Spirit: Margot Tubbiolo On Speaking Your Truth
Plant and Thrive: Trees Can Be The Answer
Spirituality in The City: Autumn 2021 Edition
Sound and Spirit: The O’Neill Sisters’ Musical Journey
Lake Shore Calling: An Inspired Healing Centre
Immune Helpers: Vitamins C & D Take Centre...
Autumn Vibes: Our Pick of the Season’s Best...
Sneak Peek – Our Interview With Dr. Joe...
Turn Over a New Tea Leaf
Sustainability and Soul: Two Leading Lights We Love
Mindfulness Based Stress Reduction Course with Eilis Cullen
Tantric Massage
Buddha Bag Meeting: Cuddle Party with Grainne Carr
Home Positive News & Interviews Positive News: Walking for Heroes, by Elva Carri
Positive News & Interviews 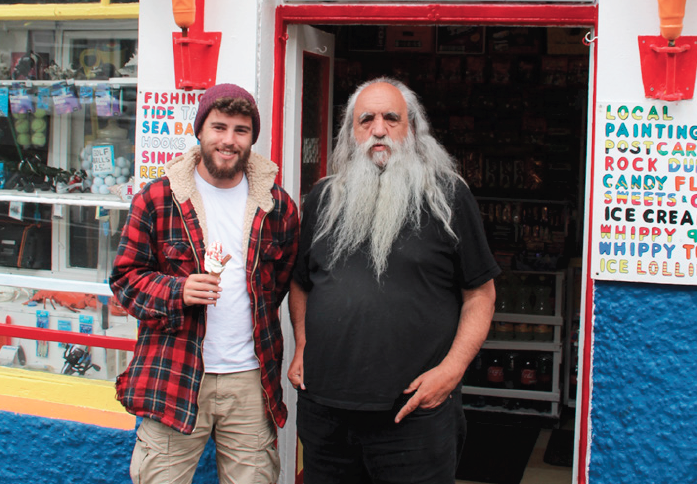 Alex Ellis-Roswell began walking around the entire coast of the UK and Ireland in August of last year. So far, he’s wracked up an astonishing 3,500 miles of the 9,500 he’s attempting to travel. What is he doing it for? For heroes, though he’s becoming a hero himself in the process.
All the money raised by his trip is going to the Royal National Lifeboat Institution (RNLI). “The volunteers who give up so much of their time and put themselves at risk for others in need are heroes.” Alex says he felt the need to change his life entirely after losing his father in 2013 and by August of 2014, he had set off on his incredible journey.
What’s his favourite thing about the journey? Why it’s you of course! “Some people travel to explore nature. And although the coast around Britain and Ireland is plenty beautiful, diverse and ever changing- it became clear to me quite early on that I was most interested in exploring people. What makes us similar. What makes us stand out from one another.”
He’s shared stories of the kindness, generosity and humour of the people he’s met along the way, giving him a home for the night, a meal and company. Messages of love and support also flood in on his fundraiser page. Maybe you’ll meet him along the way and offer him a bed for the night, maybe you’ll decide to donate. Even if we each learn to be a little more open with the people we meet in our own daily adventures, he’s already given the world something wonderful.
bt.com/longwalkround
Taken from out autumn 2015 issue, subscribe to have the next four issues delivered to your door in print.

Accelerate Your Path: We Talk to Dr. Joe...

Bringing Galactic Wisdom to Earth: A Conversation With...

Get Unstuck and Thrive: The Power of Energy...