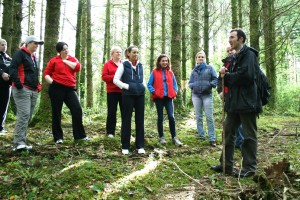 Tucked away beneath the backdrop of the Bluestack Mountains, in the town of Trummon, Co Donegal, lives 36-year-old Keith Corcoran. While walking over mountains and rivers on his travels in 2007, he began dreaming of a way he could think globally, act locally, and benefit his own community. Little did he know the very process of these walks in nature would be the essence of his new venture when he returned home to Ireland.

Weeks after his return he was approached by a family resource centre to see if he would be interested in setting up a walking group. “In a flash, I knew this was it,” said Keith. From his own experience he felt that reintroducing people to their natural environment could help decrease anxiety and stress, loneliness and depression, as well as having preventative health effects.

The scientific world has backed up Keith’s gut feelings, proving that walking in nature for just 15 minutes per day has an impact in decreasing many physical ailments, as well as benefiting mental health.
After leading many walks and bringing communities together, the time was ripe for Keith to help take things to the next level. October saw the official launch of the first Green Prescription Programme in Ireland – a Donegal-based pilot programme integrating Healthy Walking Groups as part of patients’ prescription sheets, with local doctors coming on board.

Keith’s vision for this initiative is that by 2015, Healthy Walking Groups will be established in every community in Ireland. He believes the difference between heading out for a solo walk and attending an organised group walk is crucial. One attendee of a walking group said, “It gives me the kick I need to get up and out. It has also, unbelievably, introduced me to areas within my own locality I never knew existed.”

The Healthy Walking Groups are accessible and attended by all ages and backgrounds. They are also graded into 6k, 3k, and 1k walks, so there is something for everyone. Keith is currently writing a booklet outlining the process of setting up a Healthy Walking Group for those who are keen to take this to their own communities. He says, “Walking truly is a wonder drug. Getting hooked on walking can only make you feel better. All you need is a good pair of walking shoes and some rain gear. Well, it is Ireland after all.”

Keith has just published his first book, Journey in Wonder, describing his travel tales. It can be purchased from his website www.journeyinwonder.com