The Wonder of Weeds. Vitamin C in wild foods 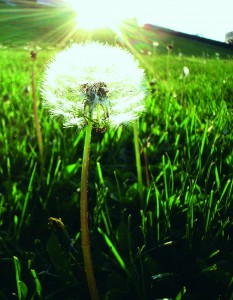 Many years back, after weeding in the polytunnel, I “discovered” Chickweed actually can be eaten, and after talking to my wife Gaby, a trained herbalist, found out it is very high in Vitamin C. It also contains protein and is as high in vitamin A as the ‘superfood’ Broccoli. From then on, I gave Chickweed a place in the garden and it now features in our salads, and more recently in Green Smoothies.

I can tell a similar story about Fat Hen, a weed one of my neighbours complained about when he found it between his strawberries. A bit of reading up on it made for interesting news: it’s High in Magnesium and Calcium, Vitamin A and C and is higher in protein than most vegetables. Eating Fat Hen Gazpacho was delicious!

We already use Dandelion for homemade lemonade and eat the young leaves in salads.
…but for me the weed of 2011 is Silverweed.

This year, I found myself literally stumbling over Silverweed, especially on the footpath of our herb garden, and that triggered another “discovery”. (Meaning I discovered it for myself and want to share it with you readers. I’m not claiming any credit!)

Silverweed (Latin: Potentilla anserina, Irish: Brisgean) is actually a very clever weed and if pulled will snap above the root and readily re-root. It reproduces itself by creeping across the soil and rooting from its stem in the same manner as a strawberry reproduces through runners. If it has invaded the vegetable patch, it has to be weeded out completely like dock or nettles.

The leaves of Silverweed are very soft and silky, and the underside is quite silvery in appearance, giving the plant it’s most common name. Silverweed is a favourite food of cattle, horses, goats, pigs and geese (anser is the latin word for goose, hence the name); only sheep decline it.

Gaby tells me that in modern herbal medicine the whole herb is used, dried, for its mildly astringent and tonic action; and Maude Grieve, in her 1931 work, Modern Herbal, says an infusion of Silverweed, sweetened with honey, constitutes an excellent gargle for sore throat.

Not discounting the medicinal properties and uses of Silverweed, I was more interested in the nutritional value, and wanted to find out if it can be eaten and how it tastes. Some books on wild foods mentioned that the starchy roots of Silverweed root can be boiled and eaten and taste a bit like parsnips, but I tell you I would much rather boil parsnips than digging thin and fiddly Silverweed roots.

The leaves are ok but not as nice as Chickweed, so, back to using it in green smoothies or in salads. Silverweed has the highest content of vitamin C of all the weeds. Courtesy of Gaby, here is a wonderful recipe for Broccoli Salad that uses Silverweed in the mayonnaise.

Directions:
Cut up broccoli florets and/or cauliflower into bite-sized pieces, leaving just a little stem. Add the chopped red onion and cashew mayo and mix well. Either serve immediately or cover and marinate for a couple of hours in the fridge. Decorate with edible flowers like nasturtiums, calendula or heartsease, or a couple of rose petals and some red onion rings just before serving. Enjoy!

Healing with Light: Drug free medicine of the future

Greetings! Very useful advice within this post! It’s the little changes
that produce the most significant changes. Thanks a lot for sharing!