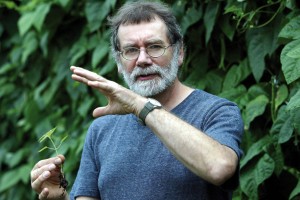 Vegetables have become more prominent in the Irish diet. They certainly have moved to the centre of the culinary stage in recent years. Many more people – not just vegetarians – now see vegetables as the heart of the meal, and meat sometimes as an accompaniment.

The Irish obsession has moved on from potatoes to broccoli, a vegetable that has become synonymous with the word anticarcinogenic. “Raw broccoli contains almost as much calcium as whole milk and is linked to lowering the risk of cancer.” (1. Whole Foods Companion, Dianne Onstad)

Working at The Organic Centre for almost 10 years, I have witnessed the growing interest in gardening and growing vegetables organically. Home grown vegetables are valued more highly now, not only for their flavour, but also for their nutritional value as part of a healthy diet.

At the same time, more and more new vegetables have appeared on the market. No restaurant with any sort of reputation is without oriental vegetables on the menu. “Two qualities of these vegetables immediately impressed me. Firstly, they can be grown fast and intensively. … Secondly, many are highly nutritious. … They seemed tailor-made for our overcrowded, health conscious times.” (Oriental Vegetables, first published 1991)

Antioxidants are compounds that defend our body against cell damage caused by various free radicals. They are best taken from the natural diet rather than in the form of supplements.

Understanding the complex chemical nature of our food is a very recent science and, with laboratory techniques developed in the 20th century, the importance of Vitamins and Minerals was finally highlighted in addition to carbohydrates, proteins and fats. However, with greater knowledge comes the realization of how little we know. Point in case is the new research into micro-nutrients and their power in our metabolism.

Even if we all now accept that a healthy diet should include at least 5 fruit and vegetable servings to keep fit, which fruits and which vegetables should we eat?

Among the vegetables that have been identified by scientists as loaded with “medicinal properties” are garlic, onion and tomato.

Garlic
Some of the most popular, traditional uses of garlic have been for treating colds, coughs, yeast infections, asthma, leprosy, bronchial congestion and gall bladder trouble. “Garlic is good for the heart, a food for the hair, a stimulant to appetite and a strength-giving food.” It is also believed to be anticarcinogenic.

Onion
Research has shown onions to have strong anti-bacterial, anti-inflammatory and anti-allergic actions, which could be why they are the starting point of choice for the cuisine of so many cultures around the world.

Tomato
Lycopene, an antioxidant which gives tomatoes their lovely, rich red colour, helps remove free radicals from the body. Free radicals are unstable oxygen molecules and have been implicated in cancer and other serious diseases.
Lycopene is the most potent nutritional antioxidant found to date. In the body, lycopene is deposited in the liver, lungs, prostate gland, colon and skin. Its concentration in body tissues tends to be higher than all other carotenoids.

I think preference should always be given toward vegetables that are fresh and in season. Research has shown that the tastiest and most nutritious vegetables are those consumed immediately after harvesting. The longer vegetables are exposed to air, heat and water, the less nutritious they will be.

This brings me back to the beauty of growing some of our food ourselves, which means we have the freshest produce available for the kitchen table. And we organic gardeners strongly believe (backed-up by numerous researchers) that the nutrition of each vegetable is influenced by the soil and any fertilization it has received during its growth. Healthy, nutritious soil will produce healthy, nutritious vegetables, and growing organically avoids herbicides, pesticides and artificial fertilizers.

If you don’t grow your own, at least buy them as locally as possible, and remember, the most nutritious vegetables are best eaten raw!

From Our Friends: CNM Fertility Workshop to Assist...