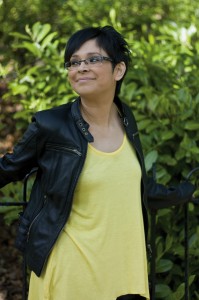 In October of last year, Mal Convery officially launched her outstanding online holistic directory, BcenteredU, a labour of love, trust and hope. Here, she recounts her own journey and the slow but steady steps she’s taking along her unique life path.

I have vague memories, from when I was young, of hearing things that weren’t there. I went for all of these hearing tests but I knew there was nothing wrong with my ears. I didn’t understand it and, if I went on, my parents would have probably thought I was nuts, so I closed the door to those sounds.
Then, about 7 years ago, I began to get messages coming through, which started to happen in a major way about 4 years ago. I could feel spirits in my everyday life and I had some amazing premonitory dreams.
Some people who have that natural ability don’t know what to do with it. Other people who have it just don’t want to know about it, and that’s fine. For me, it’s more about self development, because what’s the use (generally) in me going out and telling people, “Oh, I can hear this and I can hear that.”?
There are people who would say, “Are you not just making that up?” But if they’re things that make no real sense to you and you know you wouldn’t normally say those things, then you’re on the right track. I have a lovely teacher who said, “When you’re being given these messages, it’s not for you to decide if it should be said or not. Most of the time these things will make no sense whatsoever to you, but perhaps it will really register with the other person.”
My parents are fully behind me now. They found it a bit hard in the beginning. As a mother, my Mum obviously supported me. That’s what they are there for. But I don’t know if they fully understood at first.
A few years ago, at the Mind Body Spirit expo in Cork, I met a lovely lady who got me into learning IET (Integrated Energy Therapy). I did a treatment on my father at Christmas because he had a really sore back. He said to me, “I’ve nothing to lose, Mal, so go for it.” The day after the first treatment, he came up to me and said, “Mal, I have a real problem with this, because I don’t believe in what you’re doing but I feel much better.” And since then, he’s been fine with it. He knows it works even though he can’t comprehend why.
I choose not to take on too many clients because of my other commitments, but I love working on myself and my family and friends.
The website was set up by me and my husband. I run it, but the idea came from both of us. I thought it would be lovely to bring people together. I had an idea for a centre to bring people together, but at the time I thought it would be a physical centre. I remember looking into it, but it wasn’t really for us. Then about two years ago, my husband came to me and said, “What about setting up a website?” and I said, “What about some kind of a directory?”
We sat down one evening and just let this idea grow: what we wanted, why we wanted to set it up. The logo came to me in a dream. The name came through when I was meditating. Even the sub-motto came to me through meditation.
It’s a platform giving people every opportunity, in a multitude of different areas, to learn what practice or therapy would be most beneficial to them in order for them to feel better, in order for them to heal themselves.
Sometimes I think to myself, “Did I do this?”, because it’s a big undertaking, especially with a young family, but I’ve definitely come to trust it. And we said we’ll just give it a go, because if it’s meant to be, it will work.
We all have free will, but we all have a path in life. If you’re meant to become the next president, it will happen. It might happen in 10 years’ time instead of 1 year’s time because your ‘free will’ will lead you all over the place, but you will still end up where you’re meant to be.
I love my job.

Marianne Speaks: We Interview Her Ahead of Her...

Discover The Presence: An Evening With Sarah Gilhooly