Do people prefer to spread good news or bad news? Would we rather scandalize or enlighten? Which stories do social creatures want to share, and why?

Researchers at the University of Pennsylvania have intensively studied the New York Times list of most e-mailed articles and it turns out that people prefer e-mailing articles with positive rather than negative themes, and they liked to send long articles on intellectually challenging topics.

Perhaps most of all, readers wanted to share articles that inspired awe. So here are a selection of stories that we have found awe-inspiring and hope that you will want to share also. 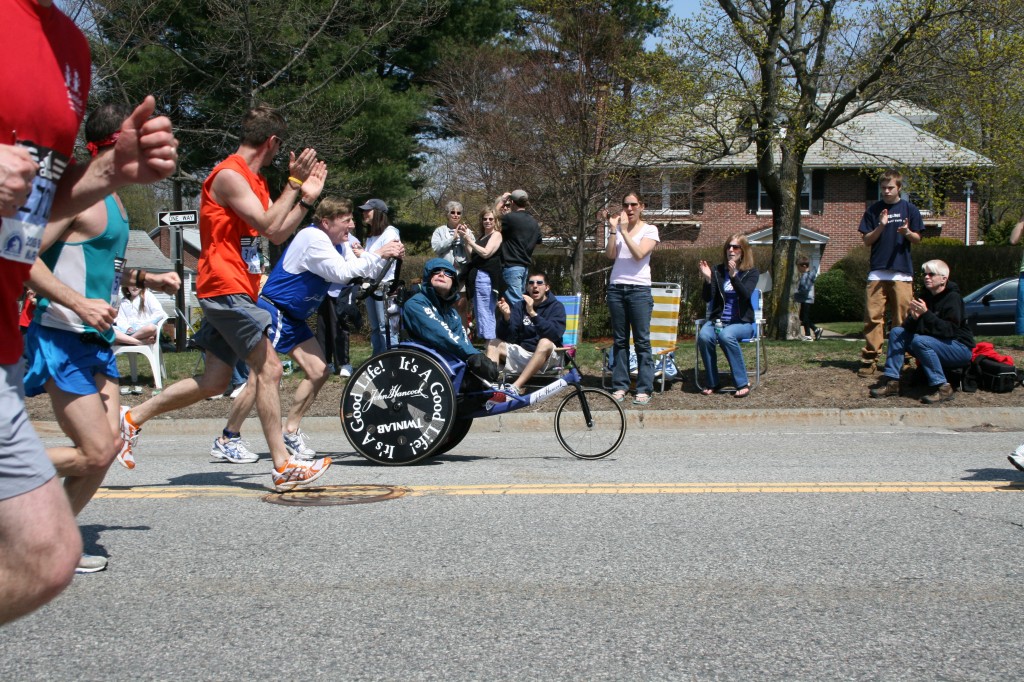 The Strongest Dad in the World
Rick was born in 1962 to Dick and Judy Hoyt. As a result of oxygen deprivation to Rick’s brain at the time of his birth, he was diagnosed as a spastic quadriplegic with cerebral palsy. Dick and Judy were advised to institutionalize him because there was no chance of him recovering and little hope for Rick to live a “normal” life.

However, Dick and Judy soon realized that although Rick couldn’t walk or speak, he was quite astute, and in 1972 a skilled group of engineers at Tufts University built an interactive computer for Rick to communicate through. Using his head to choose letters, he could type out exactly what was on his mind.

In the spring of 1977, Rick told his father that he wanted to participate in a 5-mile benefit run for a Lacrosse player who had been paralyzed in an accident. Far from being a long-distance runner, Dick agreed to push Rick in his wheelchair and they finished all 5 miles, coming in next to last. That night, Rick told his father, “Dad, when I’m running, it feels like I’m not handicapped.”

This realization was the beginning of what would become more than 1,000 races completed over the next 33 years, including marathons, duathlons and triathlons (6 of them being Ironman competitions). Also adding to their list of achievements, Dick and Rick biked and ran across the U.S. in 1992, completing a full 3,735 miles in 45 days.

In a triathlon, Dick will swim while pulling Rick along behind him in a boat attached by a bungee cord, cycle with Rick on the front of a special two-seater bicycle, and then run while pushing Rick along in his custom made running chair.

The 2009 Boston Marathon was officially Team Hoyt’s 1000th race. Rick says that if it comes down to doing one race a year, he would like it to be the Boston Marathon – his favourite race. Neither Dick or Rick are ready to retire yet. Even though he is now 70 years old, Dick Hoyt hopes that he is able to push Rick in the Boston Marathon this year.

Once asked, if he could give his father one thing, what would it be? Rick responded, “The thing I’d most like is for my dad to sit in the chair and I would push him for once.”

The Giving Pledge
The Giving Pledge is an effort to invite the wealthiest individuals and families in America to commit to giving the majority of their wealth to the philanthropic causes and charitable organizations of their choice either during their lifetime or after their death.

The campaign was started by Warren Buffett and Bill and Melinda Gates, who themselves have donated the vast majority of their wealth to charity; and while the Giving Pledge is specifically focused on billionaires, the idea takes its inspiration from givers of all financial means and backgrounds.

Over 50 of the wealthiest families in America have already pledged over half of their fortunes to various causes, including Star Wars creator George Lucas and Facebook creator Mark Zuckerberg. “People wait until late in their career to give back. But why wait when there is so much to be done?” said Zuckerberg. “With a generation of younger folks who have thrived on the success of their companies, there is a big opportunity for many of us to give back earlier in our lifetime and see the impact of our philanthropic efforts.”

“The Giving Pledge is about changing the culture of giving,” said Peter Singer, professor of bioethics in the University Centre for Human Values. “Research shows that when people know that others are giving, they are themselves more likely to give. So publicly pledging to give will encourage others to give. This holds true for billionaires and for those of us who aren’t anywhere near that level of wealth. We can all make a difference and play our part in making the world a better place.”

The World’s Most Humane Prison
Ten years and 1.5 billion Norwegian kroner (1.9 million Euro) in the making, Halden Fengsel, Norway’s newest prison, is spread over 75 acres of gently sloping forest in southeastern Norway. The facility boasts amenities like a sound studio, jogging trails and a freestanding two-bedroom house where inmates can host their families during overnight visits. The scent of orange sorbet emanates from the “kitchen laboratory” where inmates take cooking courses.

“In the Norwegian prison system, there’s a focus on human rights and respect,” says Are Hoidal, the prison’s governor. “We don’t see any of this as unusual.” Halden embodies the guiding principles of the country’s penal system: that repressive prisons do not work and that treating prisoners humanely boosts their chances of reintegrating into society. “When they arrive, many of them are in bad shape,” Hoidal says. “We want to build them up, give them confidence through education and work and have them leave as better people.”

The City that Ended Hunger
“To search for solutions to hunger means to act within the principle that the status of a citizen surpasses that of a mere consumer.”
CITY OF BELO HORIZONTE, BRAZIL

Belo Horizonte, a city of 2.5 million people, once had 11% of its population living in absolute poverty, and almost 20% of its children going hungry. Then in 1993, a newly elected administration declared food a right of citizenship.

Belo’s City Agency developed dozens of innovations to assure everyone the right to food, especially by weaving together the interests of farmers and consumers. It offered local family farmers dozens of choice spots of public space on which to sell to urban consumers, essentially redistributing retailer mark-ups on produce – which often reached 100% – to consumers and the farmers. Farmers’ profits grew, since there was no wholesaler taking a cut, and poor people got access to fresh, healthy food.

Another product of food-as-a-right thinking are 3 large, airy “People’s Restaurants” (Restaurante Popular) plus a few smaller venues that serve 12,000 or more people daily using mostly locally grown food for the equivalent of less than 50 cents a meal.

No one has to prove they’re poor to eat in a People’s Restaurant, although about 85 percent of the diners are. The mixed clientele erases stigma and allows “food with dignity,” say those involved.

A former manager within this city agency, Adriana Aranha, says, “I knew we had so much hunger in the world. But what I didn’t know when I started this, is that it’s so easy to end it.”

Innovations that Nourish the Planet
Worldwatch Institute released its report, State of the World 2011: Innovations that Nourish the Planet, which spotlights successful agricultural innovations and unearths major successes in preventing food waste, building resilience to climate change and strengthening farming in cities. The report provides a roadmap for increased agricultural investment and more-efficient ways to alleviate global hunger and poverty. Drawing from the world’s leading agricultural experts and from hundreds of innovations that are already working on the ground, the report outlines 15 proven, environmentally sustainable prescriptions.

“The progress showcased through this report will inform governments, policymakers, NGOs and donors that seek to curb hunger and poverty, providing a clear roadmap for expanding or replicating these successes elsewhere,” said Worldwatch Institute President Christopher Flavin.

Serving locally raised crops to school children, for example, has proven to be an effective hunger- and poverty-reducing strategy in many African nations, and has strong parallels to successful farm-to-cafeteria programs in the United States and Europe.

Written in clear, concise language, with easy-to-read charts and tables, State of the World 2011, produced with support from the Bill and Melinda Gates Foundation, provides a practical vision of the innovations that will allow billions of people to feed themselves while restoring rural economies, creating livelihoods, and sustaining the natural resource base on which agriculture depends.

Doctors Baffled by Breatharian
An 82-year-old man who claims he can survive without food or drink has baffled doctors who studied him and did not see him eat or drink anything for more than two weeks.

Prahlad Jani said that he has lived for more than 70 years by absorbing water through a hole in his palate. He spent more than two weeks in April and May last year under the observation of doctors at Sterling Hospital in Ahmedabad.

“We studied him for 15 days with him taking no water or food,” Dr. Sudhir Shah said. “Jani gargled water and took baths, but consumed nothing.” Despite no water entering his body, urine nonetheless appeared to form in his bladder – only to be re-absorbed by the bladder walls.

He has confounded the scientists. “While thin, Jani is healthy,” doctors said.

“We realized that, if this whole phenomenon really exists in a human being even for 15 days, it would have immense application in unravelling secrets of medical science and its application for human welfare,” a statement from a scientific group, that included the Defence Institute of Physiology and Allied Sciences, said.

“Instead of ignoring this case, we selected to investigate further, in a rational and scientific way. We again make it clear that the purpose of this study was not to prove or disprove a person, but to explore a possibility in science and study a new phenomenon,” the statement said.

The Pluck of the Irish

This Dublin Photographer’s Beautiful Images Will Blow You...

Worldwatch Institute’s Nourishing the Planet [www.NourishingthePlanet.org] just put out a really cool new one minute book trailer for State of the World 2011: Innovations that Nourish the Planet. Check it out here: http://bit.ly/e8q0Zb