Now Trending:
Truth, Love and Community: Breaking Out of Our...
NeoTantra Mingling & Magic with Dawn Cartwright
Mooncup: Simplifying Periods
Thrive On: The Documentary With An Empowering Dream
We Recommend: CNM’s Immune Boosting Webinar
My Family Healthcare Toolbox: What’s True for Me
Luxury for the Hair: We Review Dr. Hauschka’s...
Five Truths for Every New Mum and Dad
Mobility Medicine: Amatsu to Free Up Movement
Truth Or Dare: The Pros and Cons of...
Positively Newsworthy: The Little Things – Autumn 2020...
The Chemistry of Life: Healing With Bio-kinesiology
The Power of Our Life Force: Pranic Healing
The Wisdom of Adamus: An Interview with Geoffrey...
‘Patterns, Placements and Potential’ by Rachelle Hicks
Seed Saving in 2020: Securing Our Future
Inspiration from Joe Dispenza: Breaking the Four Minute...
Announcing: Our New Patreon Community
Turn Over a New Tea Leaf
Positive Nights Presents: Oracle Girl – The New...
Deva Premal Nominated for Grammy Award
We Recommend: Health Coach Discussion with CNM
Mindfulness Based Stress Reduction Course with Eilis Cullen
Interview with Martin Duffy – Director of The...
Tantric Massage
Doreen Virtue: The angel author shares her transformational...
Positive Nights: The Promise and Challenges of Psychedelic...
Home Food & Recipes The Art of Conscious Cooking
Food & Recipes

The Art of Conscious Cooking

The Art of Conscious Cooking
by Joanne Faulkner 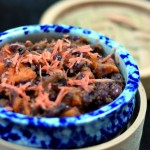 I’ve been looking forward to this season because I adapted a delicious recipe from Daverick Leggett’s book, Recipes for Self Healing, which I think is perfect for this time of year, served with some chewy brown rice and steamed green broccoli. During winter months, we crave long-cooked beans, hot soups and stews. They take their time to release their heat and energy into our body, giving a feeling of grounding and strength. Unless you have a greenhouse, or buy it in a bag, gone are the days of quick growing lettuce and tender leaves. These are predominantly Yin foods, they grow quickly and their energy is dispersed and used rapidly. Now, however, we need the Yang foods, which are generally condensed or small in size and take a long time to grow, such as beans, seeds, barley and millet.

Pre-soak and cook the beans with a strip of kombu until they are soft. To make dashi broth, soak the shitake mushrooms for 30 mins in water from a recently boiled kettle. Meanwhile, peel and chop the squash and sweet potato into fairly small pieces and steam until almost soft. Following soaking, finely slice the mushrooms and combine with the aduki beans, squash, sweet potato, dashi broth, vegetable stock, soya sauce and ginger. Simmer together slowly until the liquid has reduced by at least half and the flavours have condensed. Take it off the heat; add the honey and black pepper, letting them melt into the stew, and serve.

The taste for this time of year is salty, and the best way to get this flavour is sea vegetables, which are incredibly rich in the minerals that are often missing in our diet due to decline in soil quality. So, although cucumber is a naturally cooling food not usually recommended for this time of year, the purpose of the next recipe is the seaweed. Dulse in the following recipe is said to have over 200 times more iron than green leafy land vegetables. It is exceptionally high in iodine and manganese, which is great for keeping our digestive enzymes and metabolism in smooth running order.

Soak the dulse in the orange juice for 10 minutes. Meanwhile, slice the cucumber paper thin and place between paper towels with a weight such as a breadboard on top to press out some of the fluid. Return to the seaweed, which should now be soft, take it out of the orange juice and finely chop as if it were a herb. Toss this through the pressed cucumber and serve as a fresh accompaniment to a warming vegetable curry. It’s also yummy in a chicken sandwich.

The organs linked to this seasonal time and the salty taste are the bladder and kidney. It is the spark created between the two kidneys that is said to fire our energy and will for life. So, lets be good to them. Don’t let them get too cold (so no crop tops in the snow please). One of the best foods to nourish and warm the kidneys, while at the same time assisting the expulsion of toxins from the body, is barley. At this time of year, toss it into as many soups and stews as possible. But, to use it as a medicine, make the following barley water ,which is great for any urinary infections and can also help in strengthening digestion, especially for those with candida.

To remove some of the laxative qualities of barley, dry roast it in a large, heavy-based pan for a couple of minutes, then add the water and bring to the boil. When it has reached this point, turn the heat down and allow a slow rolling simmer with the lid on for at least an hour – up to two hours if you can. Strain the barley from the water and allow it to cool. If the liquid is very thick, use it like concentrate and add water. Also, for flavour add lemon or barley malt. The liquor can be kept in the fridge for up to five days. It is possible to eat the leftover barley too. Add some nori flakes just to further nourish those kidneys which, at this time, need to rest and restore, ready for us to enter the spring for another year coming.

Joanne is a fully qualified shiatsu practitioner who specialises in acupressure and food to balance the body. To book a treatment or consultation, please contact her on 086 607 0432. For information on wholefood catering or to book a place on her one-day cooking courses, email joannefaulkner@live.ie

The Wonder of Fresh Bread

The Powers of Raw Food

The Magic of Biochemistry by Jess Keane (BSc.Dip.Nt),...

We Recommend: Shanbally House & Gardens – A...

I made the stew with adzuki beans and kombu broth. Beautiful recipe of a light winter dish. That’s exactly what you want – to be warmed up and feel nourished. Thank you!