Diary of a Voyager: Introduction to Surrender. Myanmar

On page 60 of our brand-new Autumn issue, we published an abbreviated account of Sigita Paliukaite’s fascinating journey through Myanmar. If you enjoyed this sneak peek, you will be sure to love the full version of her story, which can be found below. 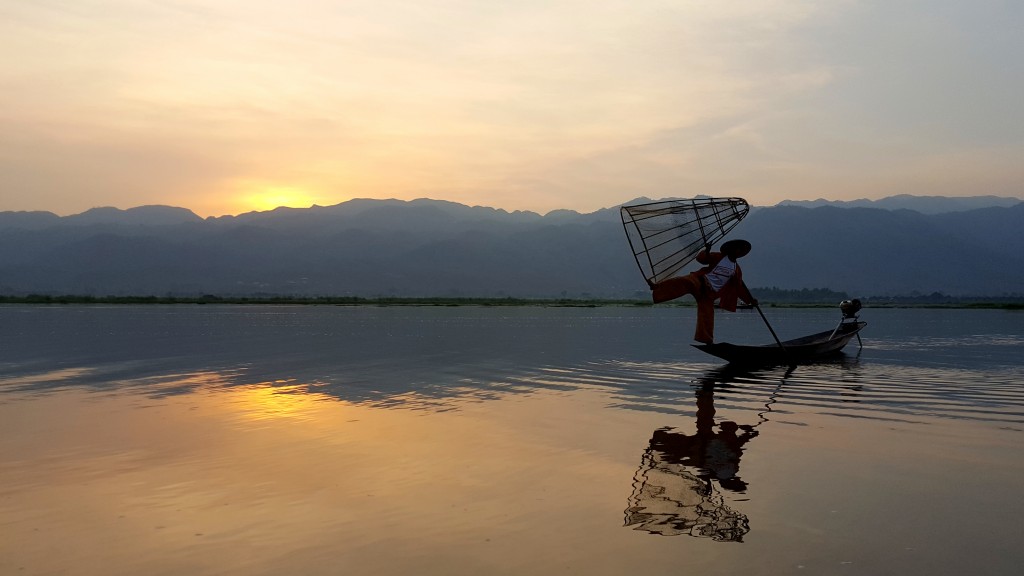 It was a hot Burmese New Year’s Day sometime in April. I was walking down a mountain after lunch in a surreal monastery with monks and a few pilgrims. There was not another soul around for miles, birds singing in a valley, houses of the town just white and grey dots in a far distance, red dust and blisters on my feet, and sweat soaking my clothes. And that’s when it finally dawned on me – I’m here, in Myanmar, in a world so strange and so enchanting: jobless, homeless, clueless of tomorrow; and it feels so fresh and it feels promising! That’s when I sensed those last old attachments, that still clung to me with such heaviness, loosing their hooks and stickiness, just floating away with lightness of a feather. I felt a space opening inside me, space for myself and for my life to unfold. And I just started laughing, and couldn’t stop until ran out of air.

Earlier that day I simply went for a walk around Kalaw, the small, lovely town I was staying in, only to find a path off town leading higher and higher to the mountains. Three hours later I was (spitting my heart out) so high on a mountain that the town had melted into the horizon. There was a stone arc on the way, stairs, another arc and final stairs.. And here it was: a tiny temple on top of a huge world. Colourful statues of fantastic creatures, surrounded by most beautiful flowers, looking down at the tops of the trees below. As I was wandering around, a dog came out of nowhere, barking at me furiously. That’s when the monks saw me and saved me. Being invited for lunch in such an enigmatic place literally blew my mind.

To be honest, Myanmar was a hard-core choice as the first country to start my journey (but it was the right one nonetheless). I was also ill most of my time there, caught a virus on the plane and was sick for weeks, then had food poisoning and so on. Perhaps it was all because my whole system went into a shock from the abrupt change of not only climate, surroundings and culture, but a deeper, internal change as well.

Shedding your inner skin that’s been worn for decades is quite an experience on its own. And the longer you wear it, the more it’s ingrown.

I’ve always lived my life bravely but still somewhat safely, always keeping that last one little safety net. But in the month before I left, I had to let go of my safety nets, stability, comforts, beliefs, attachments, things I had learned, loved and valued, so many parts of the image of myself.

Myanmar itself was way too much to fit in our timeline of 24/7, never mind another storyline. My tale, just like my journey, starts in a new world around me that transcended pieces of my identity, opening the gates for further dives.

For the first few days after landing in Yangon, I was constantly dizzy and nauseous. The heat, the humidity, the amount of people, cars and street dogs, men wearing skirts, everyone in velvet flip flops, dust and filth, smells of odd food in odd spices, the world completely unknown to me before… I felt like a giant white Gulliver in his travels. I’m convinced that Mr Swift must have been visiting Burma when he came up with some of his ideas.

I read advice in many travel blogs to buy a torch when going to Myanmar, which I did. Well, my first power blackout experience was while waiting for my luggage in the airport. Airport! (I believe they do have an emergency power generator supplying their traffic control tower). Myanmar was fascinating and a lot … and it was many things every day.

Shwedagon Pagoda in Yangon is, safe to say, the most stunning monument to a religion in South-East Asia, if not in the whole wide world. And to wealth. Massive stupa coated in real gold with diamonds and rubies on the top. It takes your breath away. And endless plains of Bagan with over 2000 ancient temples scattered across. It’s a jaw dropping sight to be standing atop one of those temples, seeing the rest swim in blue morning mist, and the sun rise. Bagan smelled of flowers and soap, but it was unbearably hot. Imagine on a hot summer day you leave your car in the sun for hours, then sit down, close the door, put the air con on, and it starts blowing hot air at you – that’s Bagan!

In between were vast river banks covered in plastic. Families with elderly and children building roads in scorching heat, and sleeping just by that road in simple huts, something more suitable for market stalls. I stopped in tiny villages. In one of them, a young guy with pretty good English explained to me that he tried to wear shoes for the first time a couple of months ago, but he cannot walk in them.

I saw a girl of ten or eleven years old when passing a construction sight near Yangon. She was mixing in a massive bowl something that looked like cement with her little bare hands, and a woman, perhaps her mother, was waiting just up the stairs for the girl to finish, with another bowl on her head. Child labour and the unspeakable poverty of common folks. It broke my heart many times.

The history of the country is appalling: generations after generations living in repression. Yet the Burmese are the kindest, most gentle and giving people, towards each other and also strangers, and seem to have no sense of vengeance in their bones. And they move with so much grace! I felt so clumsy and unbalanced while surrounded by beautiful people walking like flowing water.

People are what made my time in Myanmar so special. I met some extraordinary beings there, both locals and travellers. And I was amazed by the expansiveness of human generosity and the creativity of the mind.

I met my first teacher: an eccentric Frenchman in his late sixties who’s been travelling the world for 15 years by now, never stopping in one place for longer than a week. The stories he had to tell! But he also taught me a very important understanding that I carry in my memory since. He told me to be sure that I grasp it fully – my life is for me. To be kind to people, to do only good, but in doing so, always remember – my life is for me. You have to do right by you to be able to do right by others. Now, in the fifth month and the fourth country of my journey, I keep coming back to his teaching more and more.

The most pleasant times were in Shan state. There was my New Year’s lunch with monks and pilgrims in the monastery. There were beautiful blue mountains and a big shallow lake with a fishing tradition. And many villages around the lake were like little Venices, accessible by boats only. There were floating gardens, ancient ruins and temples where thousands of bells tinkled in the wind. And such a variety of culture. I went village trekking for three days. That wasn’t a journey through decades – it was rather a journey through centuries! And these were real tribes. They do live exactly the way you see them. I slept in the houses of locals and ate their food. On the last day of trekking, we finished in a beautiful little village where clouds come down the mountains and land in their green fields..

I don’t have many pictures of people, especially tribal. During my first days in Yangon I was told that in the 90s, when Burma made its first attempt to open borders for tourism, tribal women (with tattooed faces or long ring necks) were kept in separate compounds in Western hotels for entertainment, as if they were in a zoo. This put me off taking photos of tribal people “because you’re different” for good.

Just before I started my travels, people used to ask me the reason for doing this swan dive into the unknown. (Well, allow me to add it didn’t take long to learn that actually it’s not one swan dive you do; you do the first big one, and then many smaller follow by the force of nature. It works like the domino effect – a friend of mine warned me about this before the avalanche started.)

I said, I want to surrender to life. And the universe has heard me loud and clear. From the first minute after landing, nothing went according to any plan, any expectation. I arrived just before a five-day public holiday, the water festival – their New Year celebration. All public transport tickets were sold out. There was absolutely nothing I could do but trust life. And somehow, I managed to keep moving. Help came my way in the forms of people and happenings.

The New Year lunch in the monastery has “an introduction” to surrender too. I actually had an anxiety attack the day before and couldn’t leave my room, and didn’t even eat for the whole day … so I spent Burmese New Years Eve hiding under a duvet. My head was screaming that I can’t do this, I can’t be this traveller I wish to be, trust the universe, trust myself … what have I done?

But apparently, there is a place of natural wisdom that, if not accidentally, then definitely subconsciously, I tapped into and simply stopped fighting and allowed it all to be – my fears and screaming mind, my hiding and self judgement, all of it! As if with a stroke of a magic wand, beautiful silence fell, and there was peace for a split second that I have never felt before. And perhaps for the first time ever I felt my true source, my true self. That’s exactly how I felt: me, the source and the destination of myself, unmoving, unaffected, unbound from the body and overthinking mind, even if only for a split second. It was as clear and as certain as the sun rising in the East. The next day, I found the path up the mountain.

They have a tradition during the water festival of pouring water on each other, to wash the old year and old worries away. And they love pouring buckets and buckets of water over tourists! Soaked from the moment I stepped onto the street, I wished it would wash away all expectations and judgement. Well, it didn’t … but I’ve learned quite quickly to keep my plate empty and take what life puts on it, to live one day at a time. It’s not that I haven’t navigated from my personhood or tried to force things ever since, but most of the time, I surrender.

That was the teaching of Myanmar.