Now Trending:
Sneak Peek: Our Summer 2020 Conversation with Sadhguru
Lifting Health: We Speak to Pauline Cox of...
Toothfaerie: A Toothpaste With Flair
Sneak Peek: Judith McAdam on the Ebb and...
Regroup and Reinvigorate: a Sneak Peek at Vitality
Sustainability and Soul: Two Leading Lights We Love
Summer Vibes: Holistic Happenings We’re Loving This Season
Sneak Peek: Deva Premal’s OM
Our Summer 2020 Issue Has Hit the Shelves!
We Recommend: The Gorgeous Blends of Nik’s Tea
Positive Nights Presents: A Journey Through Astrology With...
Our Zoom Event With Geoffrey A. Hoppe: The...
Positive Life Presents: The Positive Club
Turn Over a New Tea Leaf
In Worship of Childbirth, By Philomena Canning
Winter Sneak Peek: A Foundation for Health
Buddha Bag Meeting: Cuddle Party with Grainne Carr
Summer 2016 issue Short and Sweet: A New...
Doreen Virtue: The angel author shares her transformational...
Tantric Massage
In Your Element – Calculating Your Feng Shui...
The Art of Reconnection: Align With Your Higher...
Home Sustainability The Good Life 2.0 – Autumn 2009
Sustainability 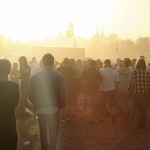 If you managed to get to any of the big music festivals this summer, you might have got a whiff of ‘Green’. It seems like every music festival these days is flaunting their ecological credentials and claiming carbon neutrality. As more and more concert promoters, venues and artists ‘go green,’ Davie Philip asks how much of this activity is genuine, and what does the future hold for music festivals.

The Future of Green Festivals

The summer season of music festivals has come to an end, your tent is packed up and you have cleaned the mud off your wellies. Earlier this summer I had the opportunity to attend quite a few festivals, and as I write this, we are putting together the final plans for the Global Green, the Electric Picnic’s area for the more ethical and green festival-goer. I worked for a week in the Green Fields at the Glastonbury festival, talked in the Ecogen tent at Oxygen, and developed the sustainability strategy for the Big Tent, Scotland’s largest eco festival. What has this experience taught me about the greening of music festivals and what predictions would I make for the future of ‘green’ gatherings?

We certainly live in challenging times with the pain being felt by both the festival organisers as well as the punters. For almost everyone, a festival is always going to be about the music. Although in these uncertain times, I wonder if festivals can play any part in helping us to make the transition to a low carbon, fair and resilient world.

The origins of today’s music festivals go back to the 1960s and 1970s where they were free and in many ways different. The anti-nuclear and early green movement often provided the momentum for cultural celebration to be united with political action. However, recently these gatherings have been more about hedonism, individualism and consumption; not really the environment to think about our health, ethics or how we engage with what’s going on on our planet.

Big public events and celebrations are essential gatherings for society, and music festivals, even eco-trend-setting ones like Glastonbury and the Electric Picnic, will always have an environmental ‘impact’. But organisers are now committed to reducing the ecological footprint of festivals and finding more responsible and greener ways of hosting these events.

In June of this year, I looked down on the illuminated two square mile site of the extraordinary event that is the Glastonbury festival and thought, ‘Is this really sustainable?’ It was supposedly the greenest yet, but with a population comparable to a small city, an energy bill to match and a huge infrastructure of fences, stages and sound systems, its environmental footprint is huge. However, Glastonbury has always been at the forefront of ecological awareness and the introduction of measures to reduce its impact. When you walk around the Green Fields, there is something special that you won’t find in other parts of the festival. Traditional skills, holistic health and new ways of thinking combine in an explosion of creativity, which in many ways encapsulates the spirit, ideals and basic principles of the first festival four decades ago. Throughout the 80s, the festival was linked with CND, before moving on to green issues. Glastonbury now donates over £1 million each year to Greenpeace, Oxfam and local charities. These campaign groups also have a major presence on site, and there’s even a special Greenpeace field. Glastonbury has set the bar for how festivals can reduce their footprint and be more green.

Last year, Cultivate worked with POD concerts and many of the Electric Picnic’s stakeholders to develop a five-year sustainability strategy for the leading Irish music festival. This, along with other measures introduced on site, including the introduction of the Global Green area, won the Picnic a Green Festival award.  This is a voluntary scheme that assesses festivals on their commitment to introduce environmentally friendly practices. The Picnic is the only Irish festival to receive the award.

The Electric Picnic, which took place this September for the sixth time on the grassy fields of Stradbally Hall, is the closest we get to a Glastonbury experience in Ireland. It is a commercial music festival but has more of an arts and culture focus with an increasing green agenda. The strap line of last year’s festival was, ‘Climate is changing.  Will you?’ This was printed on 35,000 wristbands, t-shirts and even the main stage. This year the slogan was, ‘Keeping it Green’.

So, what are these ‘green’ festivals actually doing to reduce their impact? Measures include the introduction of eco-cups that can be reused and avoids the festival site becoming a sea of plastic. Stalls selling food are instructed to use biodegradable packaging and cutlery, allowing all food waste to be potentially composted. They are also asked to source food and drink from organic producers and be local or fairly traded. Revellers are encouraged to leave their cars at home and arrive by bike, public transport or to use a lift-sharing scheme. Waste is reduced and recycling introduced. Energy use is minimised and low energy bulbs are used in on-site lighting.  Some festivals are even using bio-diesel to power generators. Many are introducing renewable energy stages using wind or solar instead of diesel generators.

Going ‘Carbon Neutral’ is the latest craze for some festivals that simply sign a check to offset their carbon emissions. The Big Tent festival in Scotland is encouraging music festivals to dump carbon offsetting. They claim that offsetting acts as a smokescreen for their impact, which can have the result of giving festival-goers a false sense that there is no need for action.  Offsetting is a way of appeasing our conscience rather than changing our behaviour, and festivals should be about celebrating change, not about business as usual.

As well as reducing their environmental impact, I would like to see festivals doing more to facilitate the building of community and increasing the communication of critical issues. Glastonbury was a leader in this field, with new smaller festivals like the Big Tent and the Big Green Gathering now taking up that mantle. However, times are hard and with financial issues and increased health and safety constraints it is getting more and more difficult to host any festival, large or small. This summer the directors of the Big Green Gathering were forced to cancel their 2009 festival only two days before they were due to kick off. They have accused the police of taking a politically motivated decision to shut down the festival on the grounds that it attracts environmental activists and would have raised money for Climate Camp.

I think that new initiatives like Climate Camp, which bring people together in a very different way, could be the future of festivals. Although not a music festival, the underlying principles of the camp could be a blueprint for Green festivals of the future. Climate Camp, which was run for the first time in Ireland this summer, is self organising, autonomous and focused on doing things for ourselves in a way that is communal and non-commercial.

A fantastic example of this ‘bottom up’ way of organising a festival is Burning Man, the annual arts festival in the Nevada desert. This is an experiment in temporary community, dedicated to self-expression and a radical self-reliance. It has grown from a small group of people gathering spontaneously to over 48,000 from all over the world. Could this approach work to combine celebration, music and creativity with social and political engagement?

The greening of music festivals needs to encompass the reduction of environmental impacts, but also needs to increase the communication of the ways in which we can change our personal lifestyles and the big challenges of shifting the direction of international politics. Many ‘green’ initiatives being implemented are light, and others are initiated only to save money or for PR reasons. Real measures need to be encouraged, but there is a long way to go before many of our commercial music festivals can claim to be green.

Davie Philip is the Education manager at the Cultivate Centre, a member of the Cloughjordan Ecovillage and the coordinator of the Irish Transition Towns Network.

Essential Healing: Flower into Your Full Potential With...

The Wonder of Tomatoes – Who’s Got the...

Collaborating for the Future We Want

One Nutrition: An Eco-Conscious Irish Brand