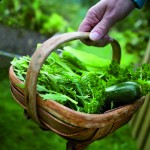 In this regular column, I explore how we can make the transition to a more sustainable way of life, one that is community based, ethical, healthy and resilient.

Growing Our Own Food – Together

We live in interesting times. There are so many converging challenges coming at us at once. Also, recent reports on climate change suggest that it’s going to get hotter, wetter, colder and dryer sooner than we thought, and that most of the planet could be severely under stress by 2050. But the system will not collapse because of climate change, pollution or running out of critical resources like oil. What runs out is the ability to cope.

Our current food systems are vulnerable, supply chains are long and modern farming is heavily dependant on oil to produce, process and import our food. Farmers are leaving the land and food prices are rising. In this article, I want to explore how we can begin to build food resilience, the ability to feed ourselves in these uncertain times, support our farmers and at the same time develop community resilience – the ability of society to cope and adapt to a changing world.

There are many ways to build food resilience. We can start by growing some of our food ourselves. The media is full of celebrity chefs encouraging us to do just this and to eat, as much as possible, from local sources. Interestingly, this year, for the first time, the seeds of vegetables outsold those of flowers. The demand for allotments is overwhelming local authorities and community gardens and city farms are popping up all over the place. Of course, gardens run by the community do more than grow food, they are also a fantastic way to get to know your neighbours and increase outdoor activity which provides many additional health benefits. The introduction of farmers’ markets, farm shops, box schemes, food co-ops and buying clubs is gaining momentum, all helping us to establish a direct relationship with the people that produce our food and reconnecting people with the land.

I mentioned previously in this column that I am a member of the Cloughjordan Ecovillage, a model of sustainable community which is developing in North Tipperary. Soon I am actually moving into one of the first eco-houses to be built, I can’t wait. In Cloughjordan, we have established allotments and teaching gardens, have made plans for forest gardens, planted hundreds of Irish apple trees and have started one of Ireland’s first CSA projects.

CSA stands for Community Supported Agriculture, a system of mutual support between food producers and food consumers. It is a low-carbon method of providing local people with sustainably produced food. This model of farming was first developed almost forty years ago in Japan where a community group started a direct growing and purchasing relationship between themselves and local farms called ‘teikei’, which literally means, “putting the farmers’ face on food.” Similar systems were developed in Europe and the United States by communities who felt removed from the production of their food. For some, especially urban dwellers, it was a way to re-establish a sense of connection to the city’s rural hinterland and to provide food security and support for marginalised and disadvantaged groups.

There are now thousands of CSA’s around the world and they come in many forms. They provide fresh, high-quality, local foods which typically use organic or biodynamic growing methods. Typically, members pay a weekly subscription and pick up a share of produce every week. Importantly, they also share in the risk; if there is a crop failure the members share the loss. Many systems encourage members to work on the farm in exchange for a portion of their membership fee. CSA’s can also be a way to help small farmers remain economically viable in these difficult times. For many members this system is a way to take responsibility for how our food is produced and to reduce the distance from the field to our plates.

In Cloughjordan, our CSA initiative is called Cloughjordan Community Farm and members or subscribers are made up of people from both the Ecovillage and residents of the existing community. It has been a fantastic way to build a bridge between the residents of the new community and the old. There are local farmers participating and even the local butcher is involved. Weekly subscriptions pay for the seeds, the livestock, the equipment needed and the wages of a full-time farmer. In return, members pick up vegetables, eggs and milk. Meat is on the way and this year we also experimented in growing oats, barley, spelt and wheat for a baker who is due to build a micro-bakery in the Ecovillage.

The Cloughjordan Community Farm is located on a 21 acre farm on the outskirts of the village and also utilises two fields on the ecovillage land. Members are encouraged to get involved in the planting, weeding and management of the farm. Our CSA is very much community driven but other CSA systems are farmer led. For a farmer, a CSA can provide a small but secure income, and the involvement of the community can overcome feelings of isolation and loneliness.

The Stroud Community Agriculture project, one of the more established CSA’s in England, has regular activities and celebrations to encourage members to get involved. Monthly workdays, farm walks, barbecues and picnics all help to cultivate community as well as cultivating the land. Community farms can also make connections with wider members of the community such as local councils, schools, educational institutions and voluntary organisations.

So, why is there not more community supported agricultural projects in Ireland? There is only one other down on Sheep’s Head peninsula, the Bantry CSA. This project was initiated this year by three farmers in the area who are growing plots of oats and potatoes, which they have opened up for subscribers to buy shares in. They have set out to introduce the concept of CSA’s to potential producers and consumers in the West Cork area and hope to extend the project next year, increasing both subscriptions and varieties of crops. Another aim of the project is to encourage the infrastructure to produce porridge locally from local oats.

With export markets at risk, maybe community food systems like CSA’s could provide guaranteed local markets for our farmers and food producers. By providing a percentage of our food locally, CSA’s can really help us to build food resilience. But here is my hope, that the current popularity of growing our own food could be a way to reach new audiences and to mainstream the ideas of sustainability.

As we build our food resilience, we inadvertently develop community resilience which will help us build the capacity to cope, to adapt and to thrive in these uncertain times. In the next issue, I want to explore personal resilience, but for now, let’s get growing together.

Davie Philip is the Education Manager at the Cultivate Centre, a member of the Cloughjordan Ecovillage and the Coordinator of the Irish Transition Towns Network.

The Wonder of Weeds. Vitamin C in wild...

From our Summer Issue: Around the Table, Around...

Finding Purpose – A Resolution for Change, By...

Learn How to Create a Conscious Workplace With...