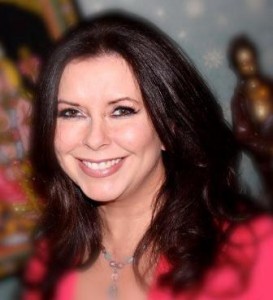 It’s such a treat to find uplifting news stories from all over the world, but we love reading positive Irish stories the most, so we were thrilled to have Siobhan McKenna tell us her tale in her own words.

In 2006, I found myself out of work. I’d always worked in the clothing trade and knew nothing else. But there were few jobs left in clothing manufacture in Ireland. At least I had a small lump sum in my back pocket. I had no excuse not to follow my life long dream of writing a book. Yet, for some reason I kept putting it off.

Instead, I took what was apparently a random step and went on a five day Deepak Chopra retreat, at the end of which, I decided to train as a Chopra Certified Instructor. The experience was transformational and challenging as the study was intense. I brought my knowledge back to North County Dublin and set about changing the world. I taught people the Ayurvedic way, with my emphasis on stress management, positive thinking and meditation. I’d no time for writing. I enjoyed the people I met yet I was struggling. The Universe was directing me in another direction, but, of course, I knew better. Just as I was building my practice, the recession hit and yet again within four short years, I was left thinking, what now? The answer wasn’t coming so I started to walk my own talk. I meditated daily; I surrounded myself with positive images and quotations. I did affirmations. And I took action by sitting down every day and writing until my book, which I’d toyed with for five years, transformed into a finished manuscript. I’d love to tell you that that was it – all good things immediately came my way, but it didn’t. I got rejections, albeit with words of encouragement about my writing. Rejection! – That definitely wasn’t part of my grand plan. I became even more diligent about my thoughts and visualisation. I asked the wonderful Davidji, of the Chopra Centre, where I was going wrong. He reminded me to trust the Universe and stop trying to control the outcome. Liking guarantees, I found that concept challenging, yet that’s what I did. I kept up my practice, now calling in the angels as well, but I let go of the outcome, asking the Universe to take care of the details.

At the end of February last, I opened my hall door to find a TV camera in my face. My book had won a publishing contract and would be on the shelves by Summer, thus fast tracking the publishing process by a year. Not only that, over and above the TV3 competition, they were offering me a three book deal. Coincidently, the theme of my book is synchronicity. So, the Universe got me there, in a round about way. Maybe if I’d stopped trying to pre-empt the outcome, I’d have gotten here quicker. Who knows? Either way, I’m having a great journey.

Perhaps next time though, Universe, you might consider leaving the TV cameras out of the equation. . .

The Lingerie Designer, published by Poolbeg Press, went on sale on June 1st. If you’d like to win yourself a copy, send us in your own Positive Irish News Story.
patrick@positivelife.ie

The Economy of Gratitude

If you’ve ever lived with anyone else – from a spouse to a college roommate – you’ve probably had conflicts over doing the dishes, the laundry, and countless other household chores. But researchers Jess Alberts and Angela Trethewey have found that a successful relationship doesn’t just depend on how partners divide their household chores; it also depends on how they each express gratitude for the work the other one puts in.

One of the keys to determining who will perform a specific household task is each partner’s “response threshold,” which describes the degree of disorder that must exist before someone is sufficiently bothered to perform a task that’s not being done.

So, how can couples cultivate gratitude, compensate for different tolerances of disorder, and thus create more equitable divisions of household labour and greater satisfaction with their relationships?

Part of the answer comes from simply being aware of these phenomena. Once one understands that, in a sense, one’s partner truly did not “see” the dirty dishes, piles of laundry, and overflowing garbage, one tends to be less angry and can discuss the issue in a less accusatory fashion—which, in turn, can help one’s partner be less defensive.

Over-performers should avoid repetitively performing a task they don’t want to “own,” especially when first living with their partner. Take turns cooking dinner so that you can both own the task down the line.

Over-performers can also communicate to their partner when a task should be performed, rather than waiting for the partner’s threshold level to be reached—and resenting them for their lack of awareness. Also, although under-performers may not perform a task to their partner’s standards, statements of appreciation—rather than criticism for not doing it right or for doing it too late—are more likely to encourage repetition.

It also helps if under-performers understand that their partners are more disturbed by a messy house, so they need to develop strategies to respond to the differences in threshold levels, such as performing a task even before it bothers them.

Finally, domestic partners may find it helpful to write down a list of their tasks and then switch lists for a week or month to better understand their partner’s contributions. They may be surprised to discover their partners do far more than they thought.

Today’s Clean Tech Could Power the World by 2050

Using existing technologies, the world could convert almost entirely to green power by mid-century — and it wouldn’t cost much more than people now spend on energy, says a new analysis of global energy use.

“You don’t need new technologies for most of it,” said study co-author Mark Jacobson, a Stanford University civil engineer.  “It’s really an optimization problem. It’s just a different way of thinking of the system.”

According to a 2008 study by the Federal Energy Information Administration, the world will need 17 trillion watts of power by 2030. In Jacobson and Delucci’s model, most of the needed power could come from electricity, as opposed to combustion, oil or natural gas.

Wind doesn’t always blow, and the sun goes down at night. But because wind energy tends to peak at night and solar energy is greatest during the day, linking both energy sources together could help solve that problem. Hydroelectric power could fill in the gaps, and far-flung geographic areas could be connected via a “supergrid” to make sure the lights stay on.

72 Hours to Transform Your City

A hundred designers, 10 urban challenges, very little money, and no sleep. That’s the recipe for 72 Hour Urban Action, a three-day marathon for designers to improve their city. Founder Kerem Halbrecht first debuted the concept at the Bat-Yam Biennale of Landscape Urbanism in Israel last September, where 120 participants working in 10 teams got three days and three nights to solve problems in public spaces.

By all accounts, the first 72 Hour Urban Action was brutal but exhilarating. The competitors slept (when they did sleep) in an empty school, and had to split a paltry $2,500 budget between all the teams. They did, however, have a truck and tractor for everyone to share. And cute orange jumpsuits.

“I wanted to challenge the common perception that creating change in public space is long and difficult, and to see if public space can respond to changing needs in real time,” said Kerem.

Nepal has offered much hope to the world throughout history. The birthplace of the Buddha himself, it has since been a place of global pilgrimage for people from all walks of life, searching for inner peace and enlightenment.

However, despite a promising history, within its own borders it has suffered from civil conflict, and has clearly been in need of a breath of fresh air, a breeze of hope, and a path towards prosperity for some time.

Cue Sushil Koirala who describes himself as one of the world’s biggest dreamers. He says he is driven by daring ambitions and a deep passion to create a more just and peaceful society, not only for his country but also for people across the world.

In 2008 he established Peace for Nepal; an organization that to date has held over 60 national events and rallies promoting peace. At the same time, Sushil initiated the Rose Movement, where roses are exchanged between people in conflict areas as a means to bring about peace.

“The rose is a universal symbol, liked by everyone,” he says, adding, “It appeals equally to everyone’s heart. The exchange of roses, the shaking of hands and extending of goodwill between people of different races, religions or parties in conflict, helps to create a more conducive and positive atmosphere for talks.”

The exchanges are a simple action but their symbolism and significance is very powerful, Sushil believes: “Just like the many colours of roses, we may be of different nationalities, ethnicities, religions or race. But no matter what colour a rose may be, it is still a rose, and likewise we are all human beings first. It reminds us of the oneness of the human family.”

In recognition of Sushil’s dedication to peace, he recently received a Giraffe Heroes Project Award. The foundation honours people who are largely unknown risk-takers, who “have had the courage to stick their necks out for the common good.”

The Positive Thinking of Somebody That I Used...

A Journey Back to Myself at Creacon Retreat...

The Near-Life Experience of Anita Moorjani, Interview by...