The Fertile Edge of Resilence

The Fertile Edge of Resilence
By Davie Philip

“I want to stand as close to the edge as I can without going over. Out on the edge you see all the kinds of things you can’t see from the center.” ~ Kurt Vonnegut 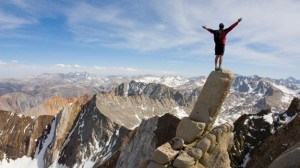 This really is a period of extraordinary change. Institutions that we have depended on are failing us, but there is a new world emerging and you can be part of it. In this Good Life 2.0 column, I have been exploring strategies and initiatives that could build our personal and community resilience to help us cope with the change. In this issue, I want to enquire into how we might discover the new in the midst of the breakdown of the old.

There is a permaculture principle that states, ‘use edges and value the marginal.’  If you are not familiar with permaculture, it is a design process that helps us to apply lessons from living systems to what we do. From a permaculture perspective, we can observe that in nature the edge is the most fertile ground, therefore if you increase the edge or the boundary between two systems, for instance the edge of a pond or a forest, you will increase productivity. The principle is simple; if the most productive area of a system is the edge, then design to increase and utilise it.

The fertility of the edge is not confined to the biological world, the same patterns are found in the social world. Most of the ideas I’ve covered here in Positive Life, like permaculture itself, collaborative leadership or community-supported agriculture, are all marginal activities, developed and practised generally by a few folks out on the edge of society. Most new thinking comes from the edge and, in these turbulent times, we really need to value these marginal approaches to build our resilience.

Innovation rarely comes from the centre. It most often comes from thinkers on the fringe, doers at the edge and makers at the margins. Fresh thinking and new ideas can come from all sorts of unexpected places, often from people or communities that have been marginalised. The edge in culture is not usually respected or listened to by the mainstream, but I am convinced that many of the responses to the crises we face will come from those willing to rock the boat, who are not content with the status quo and are willing to take a risk and try something new. As Einstein famously said, “we can’t solve problems by using the same kind of thinking we used when we created them.”

No one can predict the future, but what is certain is that it will be characterised by uncertainty. More than ever, we will need to develop our capacity to cope with surprise and become competent in doing a lot more for ourselves. No one is coming to save us, which means we are all going to have to step up, demand change and play our part in the future that is emerging.

As I write, there is revolution in the air. The protests inspired by the massive public uprisings in Cairo’s Tahrir Square and the Campanadas in Spain are popping up everywhere, from Wall Street to Dame Street. Although these movements are leaderless and are often criticised for having no clear goals, they are intensely democratic and are doing a lot more than simply demanding change. By utilising processes like the people’s assembly and consensus decision-making, the activists are self-organising and are exploring possible solutions as they strive for a fair and just society based on participatory democracy. They are, as Gandhi would say, being the change they want to see.

The mainstream media response to these gatherings was at first to completely deny they were happening. Then, as the more liberal press picked up on them, there was an attempt by most of the corporate media commentators to label the occupiers as naive and unrealistic. Mass arrests have been reported from many of the public squares occupied by the activists. This is what you would expect, as Gandhi observed, “First they ignore you. Then they ridicule you. Then they fight you. Then you win.” So will these protesters succeed?

In these occupied public places, ordinary people, with a conviction that things are not quite right, are discussing brilliant ideas and innovative strategies for change. They share an understanding that the difficulties that people are facing are due to an underlying structural systematic problem. They aren’t claiming to know all the answers. What they do know is that, by discussing the problem and sharing perspectives, responses to our challenges will emerge. They know that we need to come together, not only to stand up to the small percent that are undermining the future for everyone, but also to begin to build the new system. As Buckminster Fuller, the famous systems thinker, said, “You never change things by fighting the existing reality. To change something, build a new model that makes the existing model obsolete.”

What these recent protests do is bring together a number of very dispirit ideas and begin to popularise them. Most of these have been bubbling up out on the edges of society for decades. Those active in these protests and the hundreds of thousands around the world working for ecological sustainability, equality and justice are catalysts for change from the old to the new. The old system that is centralised, individualistic and highly dependent on hierarchy and control, and the new that is decentralised and is characterised by openness and fairness. As these actions become connected, a powerful movement with influence on a larger scale is emerging.

The innovators aren’t the rich and powerful at the centre, they are the incredible number of people on the periphery who are resisting, reconnecting, rethinking and revitalising the world in which they live. To respond to today’s crises and develop our resilience, we will need to listen to and appreciate these ideas from the edge. The greater the diversity of resilience strategies available to us the greater our ability to respond to the challenges we face.

As Jack Kerouac declared, “Here’s to the crazy ones. The misfits. The rebels. The troublemakers. The round pegs in the square holes – the ones who see things differently. They’re not fond of rules and they have no respect for the status quo. You can praise them, disagree with them, quote them, disbelieve them, glorify or vilify them. About the only thing that you can’t do is ignore them. Because they change things.”

The Wonder of Fresh Bread

Collaborating for the Future We Want

How to Start Growing Your Own Fruit: Sneak...