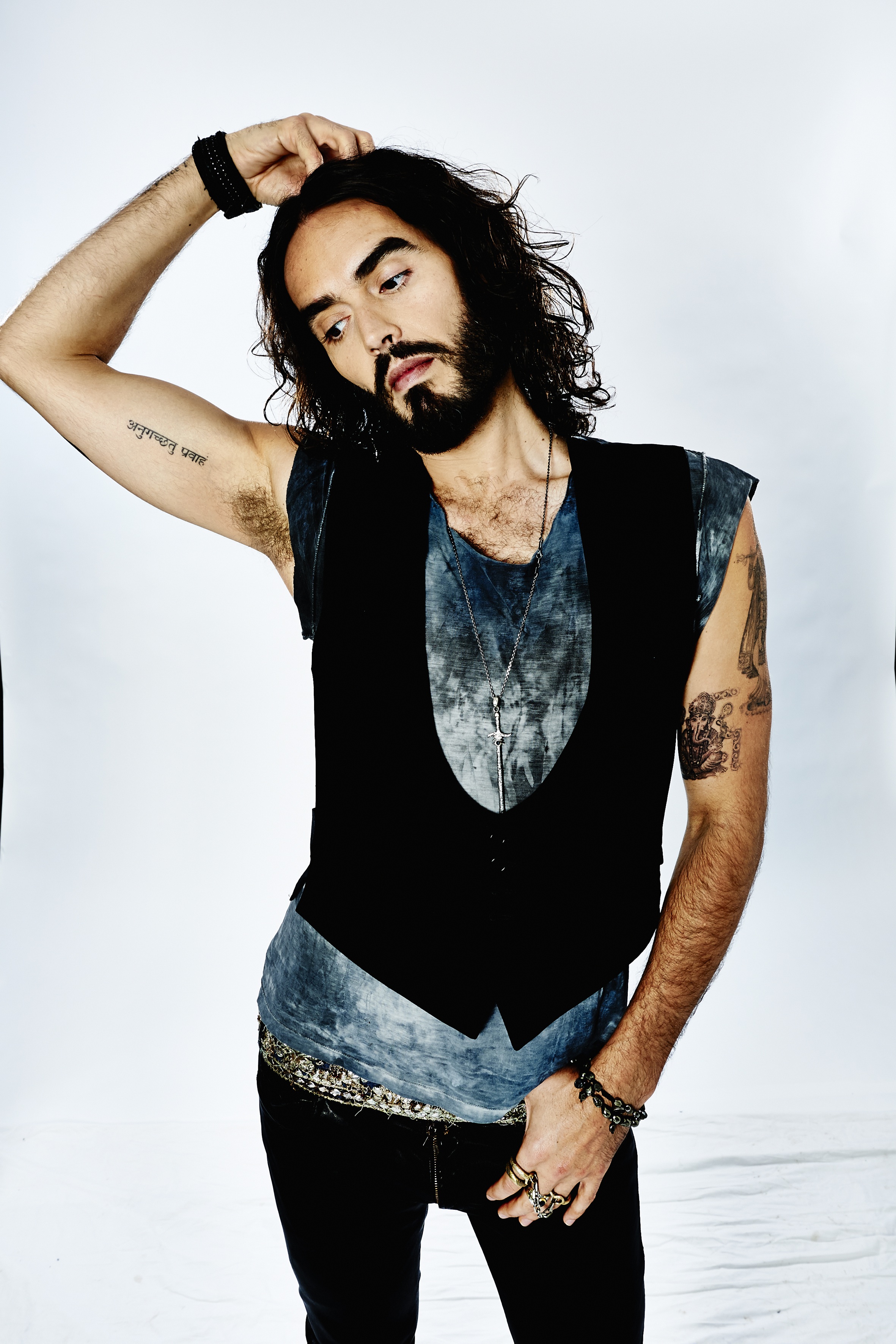 Our Autumn issue is out soon and they’re flying out of stockists these days but you can click here to subscribe and have four beautiful print issues delivered to your door over the course of the year if you’d like to.

From revolution to evolution.

“The dead human ape has not evolved for the last 10,000 years…Now we must transform, become enlightened, so we can access the next realm of consciousness necessary for our evolution. I think we elect to ignore the spiritual and it causes a deficit for ourselves and our culture and for our planet… we’re all basically the same as one another, we’re all connected to each other and we have a collective responsibility.”

Love him or love him not

I have not always been a fan of Russell Brand. A few years ago, it looked to me like he was all show and no substance, an opinion that was reinforced when he was spotted at the London riots and asked what he was doing there. He couldn’t answer the question, he didn’t seem to know. When Russell acted as a guest editor of the New Statesman, he wrote a manifesto and within it actually describes that day. He was shopping with a stylist when the protest came to his attention. He likes a bit of chaos, so he dropped the shopping and went to take part. Within the context of his current ideas, it seems that impulse was not to ‘look like he was at a protest’ but perhaps to participate in something with a different purpose; to be amongst people who knew that things need to change. His instincts were his motive and they’ve led him on a pretty interesting journey. 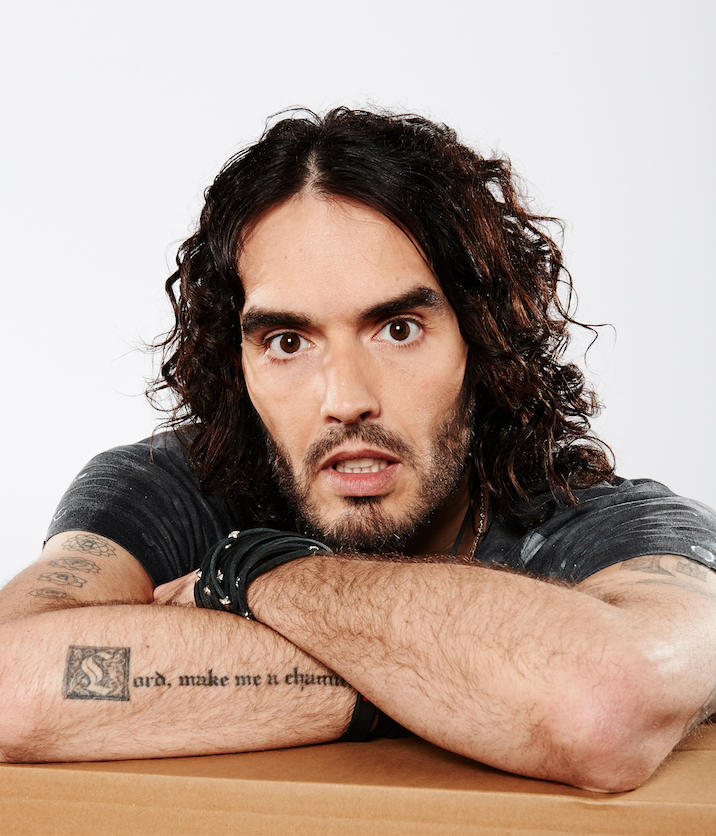 After his stint as editor with the New Statesman, the infamous Paxman interview came about; where Paxman challenges Brand on his choice not to vote. I still was not on board with Brand hype. Why was this man so adamantly opting out when he wasn’t proposing an alternative? Paxman asks him the same question and he laughs it off saying, well he was busy editing a magazine wasn’t he and he wasn’t about to invent it right there on the spot. But why would a man who seemed to not have any clear plan try to incite revolution? His manifesto didn’t come with ‘5 Step How To Instructions”, so what were we to do with it?

A transfer of power

Delving into more interviews with Brand, it begins to become clear why he hasn’t been extremely specific about how change should come about or what the world will look like when it does. He’s not proposing a set structure for a new system because he’s instigating a shift in our understanding of ourselves and the world and promoting a change in how we go about our daily lives. It’s a grass roots, paradigm shift. He’s not talking to governments and corporations, he’s talking to you. In doing so, he’s transferring the power from ‘them’ to ‘you’. His goal is to empower you so that you can make the best choices, not to tell you what those choices should or shouldn’t be. To me, this is the most interesting facet of his approach. Revolution as we know it is turbulent, which might be ok if a ‘revolution’ didn’t bring you 360 degrees – back to the same place you started. What he’s pushing for is evolution, in consciousness. Evolution brings you forward, it’s survival of the fittest and adaptability to change. When it comes to progress, this may come down to the fittest, most adaptable and sustainable ideologies. 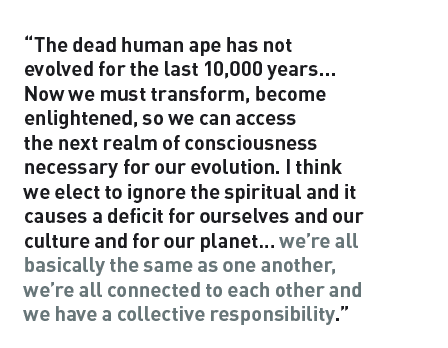 Brand’s understanding doesn’t come as words alone, it’s complemented by action and attitude. Transcendental Meditation (TM) and yoga have brought him to a place where he seems content in himself yet driven to serve the needs of society. He says he’s happiest when he’s being nice to other people. He promotes the benefits of TM through speaking at events and recently took part in promoting David Lynch’s new film; which documents the filmmaker’s 40 year relationship with TM as a way to change the world. He’s re-written fairytales to help children see the world differently than we were taught to. To help people see through the weird fuzz of what newspapers tell us is important, he makes ‘trews’; short videos where he analyses what the papers are saying and raises alternative viewpoints. The analysis is embellished by reading from the work of the likes of Eckhart Tolle and visits from Alain de Botton, two people equally dedicated to change.

Another quality of Brand’s approach that is noteworthy comes from some new evidence on belief perseverance. This is the tendency to cling to one’s initial belief even after receiving new information that contradicts the basis of that belief. Brendan Nyhan, a professor of political science at Dartmouth, published a study on this with research carried out over three years. None of the methods he thought would or should work had any significant effects. What did have a positive effect, enabling people to answer questions more accurately, was when they were asked to recall a time they felt good about themselves before answering questions; on the basis that our beliefs are tied to our conception of ourselves. In previous, similar studies, self-affirmation exercises had equally positive effects in overcoming prejudice and low self-esteem.

Brand seems able to incorporate this approach naturally. He makes efforts to make people feel loved and welcome, have fun and thus feel good about themselves. When he interviewed members of the Westboro Baptist Church he told them he loved them and expressed appreciation and respect for coming into a room of people unlikely to agree with them. He tells Paxman how gorgeous his beard is. If these small gestures of appreciation, love and good humour help people feel good about themselves, he’s facilitating an atmosphere where people are more likely to see things accurately and make good choices. By encouraging people to try yoga and meditation, he’s also encouraging people to be in a state where they feel good about themselves. At that point, Russell doesn’t need to have all of the answers to what a utopia would look like or how exactly to get there, he’s empowered you to decide what is best for you, the planet and the people around you in each, individual moment. It comes back to the transfer of power from the elite to the many, but in a most peaceful, loving manner. He trusts you. It may not be as exciting or dramatic as calling for a rowdy revolution, but it may be more beneficial long-term.

“Think of yourself as a manifestation of some higher thing, some higher frequency. This is the visible realisation. And you know that because you can’t see atoms, can you? And you certainly can’t see the forces that hold atoms together. There, in the micro-quantum world, lie the answers to everything. We can’t understand it with our logical, rational minds. We feel it intuitively. Get yourself in alignment with that stuff and you’ll beam like the sun!”

Be beaming and active

My Dad taught me an analogy for ‘goodness’ when I was little. When there are two adjoining rooms, where one has a light on and the other is in darkness, opening the door between the two serves only to make the dark room brighter; the bright room does not become any less bright. Love and truth are win-win like that, the effects of beaming with them will always be the more powerful energy. And when it comes to being active, don’t forget that just a few years ago Russell couldn’t really say why he was at that protest. If something captures your attention or your imagination, be bold, show up. You never know what you’ll learn about either side of the issue and it just might be the start of a very enlightening adventure.

From our Summer Issue: Around the Table, Around Ireland, By Samuel Bishop

Rude Health at the RDS