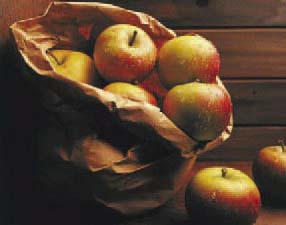 Certification of Organic Food
The Organic Trust is a not-for-profit organisation which was set up in 1991 by a core group of organic ‘pioneers’. The organisation came about through a very sincere desire to protect and develop high standards of organic production in Ireland by those at the leading edge of what was then a new and exciting movement. From such humble beginnings the organisation has grown and developed into a professional organic certification body which is now at the heart of shaping and maintaining organic principles and standards in this country.
Many things have changed in the past seventeen years but one thing has remained exactly the same and that is our founding principle “to maintain the integrity of food labelled as organic in Ireland”.

What is the function of the Organic Trust?
The Organic Trust inspects and certifies farmers, growers, processors, meat plants, abattoirs, importers, distributors, wholesalers, retailers and so forth to check their compliance with the legislatively controlled organic standards. The Organic Standards are a series of rules, regulations and principles relating to all aspects of the organic food chain – what is vital to remember is that organic food production is the only method of food production which is inspected and certified from farm to plate – every single aspect of the production process is inspected and that’s not all. Once an organic licence has been awarded to an operator, they must then re-apply annually for a renewal of their licence and go through the entire inspection and certification process again and again.

Why is Organic Better?
Organic food is better for you for a whole host of reasons – some of these are now outlined.  Organic food contains higher levels of antioxidants!  Those ‘inside’ the organic movement have always known that organic food was better- it just made sense! No nasty synthetic pesticides and herbicides to worry about. No old ‘wonders’ like the food additives so lauded in the 50’s and 60’s as the saviours of food products such as Tartrazine, Sun Set Yellow and so forth. No new ‘miracle’ Frankenstein wonders like GMOs (genetically modified organisms) and irradiated foods. But now we no longer have to rely on just our common sense to tell us that organic food is better, preliminary results from a 4 year study conducted by the University of Newcastle is officially confirming this. In this study, organic milk for example was found to have antioxidant levels which were at least 40% higher than those found in its conventional counterpart!! And it is not just milk. Organic wheat, tomatoes, potatoes, cabbage, onions and lettuce all had between 20% and 40% more nutrients than their non-organic counterparts.
Better for the environment.
Apart from the obvious things which organic farmers don’t do such as make heavy use of petro-chemical products, it is many of the actions which organic producers do take that make a very real difference. Preservation of hedgerows for instance protects many of Ireland’s fragile eco systems.
Better for animal welfare.
Better for rural Ireland.

How do I know it is organic?
In Ireland an example of what you will see is this:

Imported products will also carry a logo and licence number. An example of this is:

Both these markings and many other similar ones will tell you that the product has been inspected and certified as organic.

The future
What does the future hold for organic production? We feel more than ever before that increased levels of transparency are needed in food production and the organic production system gives this much needed re-assurance to the consumer. In recent years we have watched as some aspects of the conventional production system began to adopt some of our principles but sadly in other ways moved further away from them. The good news is that consumers are now voting with their purses. Year on year organic food is the sector with the highest consistent growth figures and it’s not just food. In 2008, the Organic Trust launched Irelands first Organic Health & Beauty Standards which will put Irish certified organic health and beauty products on the shelves in the not too distant future.
When you choose to buy an organically certified product you are doing much more than making a simple purchase. You are making an investment in the kind of world you will leave to your children – let us all participate in leaving a legacy of fruitful land for our children to enjoy for millennia to come.
If you would like to learn more about the Organic Trust or organic food in general, please visit our website at: www.organic-trust.org