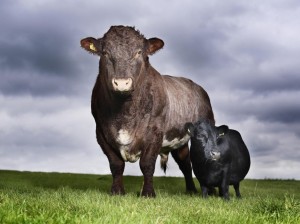 A minuscule cow with a taste for contemporary music has been named the world’s smallest by the Guinness World Records book. Guinness says the sheep-sized bovine from the West Yorkshire region of northern England measures roughly 33 inches from hind to foot. The 11-year-old cow is named Swallow and her owner, Caroline Ryder, said she would spend Thursday either grazing with her herd or listening to BBC radio in her cowshed. Swallow is a Dexter cow, a breed known for its diminutive stature, but is small even by Dexter standards. She already has nine regular-sized calves and is pregnant with her 10th. Guinness said her youngest calf has already grown larger than she is.
www.guinnessworldrecords.com 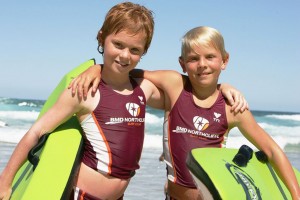 Two 8-year-old boys in a young lifeguards training program rescued a man who was struggling in the ocean off Australia’s east coast. Jake Satherley told Australian Broadcasting Corp. radio that he and friend Spencer Jeams saw a middle-aged man having trouble off Northcliffe beach, in Queensland state. “We saw him put his hand up and was saying, ‘help, help,’ so we went over to him and pulled him on our board,” Satherley said.
The boys are part of the under-14 lifeguard training program at Northcliffe Life Saving Club. Club president David Shields said he’d never seen a rescue like it. “They really did perform well above their years,” he told ABC. “We’re just so proud of them and the way they acted instinctively.” Nearly 50,000 Australian children, ages 5 to 13, are enrolled in junior life saving programs, according to Surf Life Saving Australia.
www.northcliffesurfclub.com.au

Spending more on food isn’t the only way to buy the healthiest diet, new research shows. “Increased spending on nuts, soy and beans, and whole grains, and less spending on red and processed meats and high-fat dairy, may be the best investment for dietary health,” Dr. Adam M. Bernstein and colleagues from the Harvard School of Public Health in Boston conclude. The trick, according to the researchers, is to spend more on plant-based foods. “Although spending more money is associated with a healthier diet, large improvements in diet may be achieved without increased spending.”
www.hsph.harvard.edu

In 1999, 13 year old Paudy Byrne started to become worryingly sick. Over the next year, he was diagnosed with depression, but that was just a symptom of the cancer inside him, which wasn’t discovered until he was rushed to hospital one day where he was diagnosed with a brain tumour.
In 2003, after a long time recovering in various hospitals, he was finally able to return to his life, which included school. He did his Junior Cert at 18, in a class of 15 year olds, but, he says, “the entire school was very supportive” and he stayed on to continue his education. In the Leaving Cert, he got one of the highest marks in the year, and went on to win the “Student of the Year Award” and the “Co. Louth Person of the Year 2006”.
Along the way, he joined Canteen Ireland, a nation-wide support group for young people who have or have had cancer, and for their brothers, sisters and friends. “When I went to my first meeting in Carlingford in 2005”, he recalls, “I realised that this wasn’t just a club for sick people, but a family. A family I was being welcomed into with open arms. It was one of the best things I ever did.” He adds, “At present I am pursuing a dream of mine in doing stand up comedy. Life’s for a good time not a long time…so enjoy it!”
www.canteen.ie

BUILDING BLOCKS OF THE FUTURE

One of the answers to one of our most pressing concerns, climate change, may well be in the very fabric of the roads we will walk on in the not too distant future. One of the innovations that inspired researchers was the way that corals absorbed CO2 while being able to put down rigid mineral structures that actually locked up CO2. Soon they realised that by mimicking this process they could produce a concrete mixture that would effectively capture CO2.
Potentially, one day, our cities could have the same environmental credentials as our woodlands and forests.  Our building blocks will work like plants to soak up atmospheric carbon. The concrete/cement industry will no longer be a primary polluting industry and CO2 from other businesses will be locked away safely for the foreseeable future.
The important factor is that the concept will work in harmony with nature and big business, making it appealing to both environmental and corporate sectors. It is a growing technology and one that could literally save our atmosphere from billions of tonnes of CO2 emissions.
www.tececo.com.au

The Long Now Foundation was established in 01996  to develop the Clock and Library projects, as well as to become the seed of a very long-term cultural institution. The Long Now Foundation hopes to provide counterpoint to today’s “faster/cheaper” mind set and promote “slower/better” thinking. They hope to creatively foster responsibility in the framework of the next 10,000 years.
Some sort of balancing corrective to the short-sightedness is needed – some mechanism or myth which encourages the long view and the taking of long-term responsibility, where ‘long-term’ is measured at least in centuries. Long Now proposes both a mechanism and a myth. It began with an observation and idea by computer scientist Daniel Hillis:
“When I was a child, people used to talk about what would happen by the year 02000. For the next thirty years they kept talking about what would happen by the year 02000, and now no one mentions a future date at all. The future has been shrinking by one year per year for my entire life. I think it is time for us to start a long-term project that gets people thinking past the mental barrier of an ever-shortening future. I would like to propose a large (think Stonehenge) mechanical clock, powered by seasonal temperature changes. It ticks once a year, bongs once a century, and the cuckoo comes out every millennium.”
Long Now added a “Library” dimension with the realization of the need for content to go along with the long-term context provided by the Clock – a library of the deep future, for the deep future. In a sense, every library is part of the 10,000-year Library, so Long Now is developing tools (such as the Rosetta Disk, The Long Viewer and the Long Server) that may provide inspiration and utility to the whole community of librarians and archivists. The Long Bets project – whose purpose is improving the quality of long-term thinking by making predictions accountable – is also Library-related.
The point is to explore whatever may be helpful for thinking, understanding and acting responsibly over long periods of time. Hence, their website contains news pertaining to our long-term future.
www.longnews.org

Coming Home To You

Ecstasy of a Cripple – Art to Revolutionise...