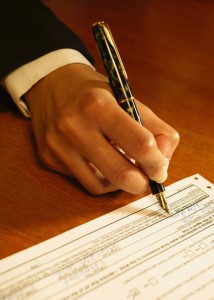 In its purest form, Democracy is supposed to be ‘of the people by the people for the people’. The foundations of it are the notions of freedom of choice and personal liberty, bound by social agreement and a system of laws and regulations. Orbiting within this sphere of consciousness is the idea of Capitalism, which is an economic system in which the means of production are privately owned and operated for profit; and its lubricant Commerce, a whole system of an economy that constitutes an environment for business.

Society is governed by a complex web of agreements or contracts. Some of these contracts are well known, such as mortgages and marriages. Others are more subtle and covert, yet can fundamentally affect the way we view ourselves and the reality of the world we live in.

An example of this would be the Birth Certificate. This contract has far reaching implications for each and every one of us to the extent that we are in effect a commercial commodity that is traded both publicly and privately. These contracts form the very basis of all debt and control.

The New Commerce is a name given to the in depth study of the history, the practice and the implications of these contracts. By understanding them, we get an opportunity to create a new societal paradigm that is based on Truth, Fact and Honour.

Rather than placing too much energy on a flawed system, or being ignorant and fearful of it, the New Commerce is a vehicle for personal and global transformation, drenched in integrity and fuelled by love.

Feeling With Reason, Creating an Alliance of Heart...

Liberating Our Minds: We Interview the Makers of...

The Couchsurfing of Eating Out, By Elva Carri