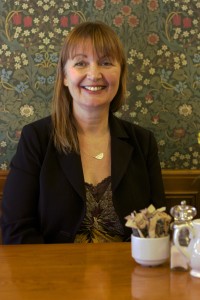 Deirdre McCafferty is owner of vegetarian eatery Cornucopia, which recently was awarded Restaurant of the Year. She lives in Dublin.

I’m owner of Cornucopia and mother of my two daughters, Dairíne and Roisín. I grew up in Dublin, had Irish Catholic parents and a very normal middle-class background. I went to Trinity College in 1971 to study sociology and was one of the first wave of Catholic people to go there. I think I always had an adventurous spirit.

I met my husband Neil and we set up Cornucopia together in 1986. He was a deep thinker and wanted to go to college and so in 1975 we went to Boston. While we were in college, we both worked in jobs that brought us to Cornucopia. He worked in restaurants and I worked in a health spa, and that led me to an interest in nutrition and to the Hippocrates Institute, which is a raw vegetarian centre, helping people heal themselves.

What does wellbeing mean? This is a question that fascinated me at that time. Up until then, I had a very atheist view on things, but I felt something missing in myself. Something was blossoming inside me whether I liked it or not. I did Hippocrates’ two-week programme and had, I think I would would call it, ‘a flowering of consciousness’. I never stopped being vegetarian after that. I decided to volunteer there and began to see the amazing healing from people in changing their diet, and of course their mind and spirit.

So, when a position came up as director of education, I came to work full time there. My husband Neil was watching all these changes in me and I remember one day he said to me, “Whatever you’re on, I want some of that,” of course it was the raw vegetarian food, wheatgrass, all of that. I was 27 at the time. Then, Neil began to show an incredible talent for vegetarian cooking, I never would have believed he had this hidden in him. All our friends were amazed.

After nine years we returned to Ireland, in 1984, in the middle of the last recession. We decided to set up a wholefood store and small cafe and worked very hard to establish Cornucopia. The rest is history. We had two children and then sadly in 1993, Neil passed away. It was amazing really that it could happen to someone so strong. It was life-changing, life-altering.

I realised then that there are no guarantees on anything. Everything is impermanent, and the only permanent thing is change. Cornucopia was very much Neil’s passion as he really liked the restaurant world, and over time I learned to love Cornucopia more and more and I guess I wanted to make it successful for him. In some ways it became like a third child.

I’ve a strong Buddhist influence and a strong Catholic influence. If I was on my death bed I think I would be saying the rosary rather than a Buddhist mantra; I think I would revert to that. I like to sit in churches sometimes, and during Neil’s brief illness they came to the house to console us, the little local priest and the little old nun, and they were great. They do that for the dying. I was so happy that there was somebody there to do that. And I’m sure if I was in a Buddhist country, the Buddhist would have arrived. It doesn’t matter really. They’re all different staircases to the same landing.

Most days, on my good days, I get up, have a shot of wheatgrass and walk the park. The iPhone means a lot to me; I have a travelling office with very little paper. I’m very blessed because I have a lot of energy. I eat sprouted beans during the day, and I eat living food a good bit but I like a cooked meal too. My favourite meal is our Mexican enchiladas. I love the mixture of really healthy food with something indulgent together. I like the balance.

I’m no saint, of course, I like to drink wine. I don’t believe in saintliness, and I don’t believe everyone can be all positive all the time either. I think both exist in life, they have to – otherwise we wouldn’t know .positive when it came along.

Being very much in the here and now is important. I do follow the law of attraction and I’ve read The Secret, and I am impressed by it, but I always believe you have to be very practical. Sometimes what we wish for is not for us anyway. Anyway, there’s very little that a good sleep, a nice shower or bath, and a good meal can’t fix.

Check out some Cornucopia Recipes

In conversation with Katie Roche

Fresh Way to Make a Crust

Water for the Soul: Restore Vitality to Your...

What a lovely article Deirdre .. You are an inspiration to all women in business

You have introduced cruelty-free cuisine to so many over 28 years. Comhghárdas.