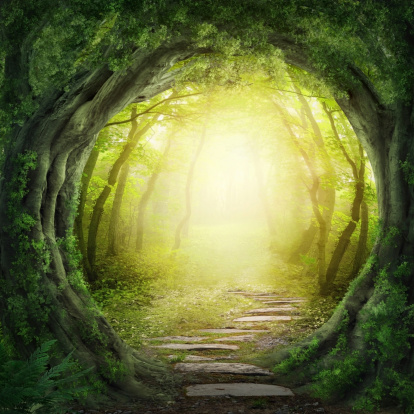 The spiritual sciences talk of several planes of existence – the lower planes express more of the matter dimension and are therefore more “material”, and the higher planes express more of the energy aspect and are therefore more “subtle”. These planes are not specific locations but they all interpenetrate each other and occupy the same “space”, merely reflecting differing levels of consciousness. Each plane is separated by a thin veil, mythologically depicted within our Celtic Lore as a mist, which once entered gave you access to another realm, or state of Being.

There are those who are born with an uncanny ability to walk between worlds and there are those who actively seek, through deep spiritual development, meditation and lucid dreaming, to penetrate through the Veil, but there are also times when the Veil is very thin. The spring of 2014 is one of those times as the intensified movement occurring within the vast cosmic ocean creates heightened cycles of ebbing and flowing spiritual forces which in turn are reflected within our experiences of the ongoing shifts within our Being-Consciousness.

As the Veil thins in mid-April, accessibility to more subtle levels of consciousness takes place and this means that you are poised for further profound shifts in perception in how you view your life in general, and humanity as a whole, as you are being prompted to wake up spiritually by raising your level of consciousness, to connect with your true-Self and widen your breadth of consciousness so that you experience life more fully.

In sync with this thinning you have been undergoing a complete transmutation through a clearing and quickening of your physical, mental, emotional, and etheric bodies. Your consciousness has subsequently evolved more deliberately, raising your body’s vibration and kindling a quickening process that can transmute the shadows of the past, including experiences, judgements, thought forms, and old patterns that have held you back.

In the same way that 2013 was all about elemental water – our emotional maturation – 2014 is all about the element of Air. If you simply correlate the word ‘Air’ with the physical air that we breathe it is essential to life in the form of oxygen. Air extinguishes fire; churns water to mist and can rip up the Earth. But it can also bring fire to life by providing the necessary fuel to feed the flame; it can push a boat across water and shape the land through erosion. Its very existence is fundamental to our wellness as Air essentially concerns communion through the medium of sound or conversation.

Continuing from the themes invoked between the 6th and 26th of February, your energetic ability to busy yourself is slowed from the 1st March through to the 20th May as you are being prompted to explore the quality of togetherness, and the dialogue that exists, within your close personal relationships. Since this time concerns how you harmonise and therefore experience union with another soul, a dynamic and vigorous opportunity is being afforded to you to enable you to raise your awareness about your behaviour within and experience of relationships.

Questions I would like you to reflect on during this time concern the quality of the spiritual dimension of your close unions. How deep does Spirit penetrate your relationships? Are you able to merge with those closest to you, without losing sight of who you are and without becoming enmeshed? Are you able to find the right words to actively communicate your innermost values and ideals and do you feel able to articulate your dreams and soul longings? Have you taken time to respect your Divine Femininity or are you letting the prevailing patriarchal values pigeon hole you into a gender based role? Can you humanly connect in the spirit of another, completely ‘seeing’ them and allowing your light to radiate unconditionally, so that you too are ‘seen’?

Moreover do you honour spirit with your words or do you allow your frustrations to dictate the tone and expression of how you communicate? Does the passion from your voice strip layers from another, or does it fire their soul with genuine encouragement, support and love? Are you able to communicate this passion to those closest to you, freely and confidently?

This questioning is intensified during mid-April as you continue to experience an awakening, acceleration and liberation of the elemental forces within you, whilst at the same time witnessing a seismic regeneration, a freeing of libidinal energies, the activation of your cellular DNA and an increased awareness of death and re-birth reflected in a configuration known as a Cardinal T-Square that has formed between Jupiter, Uranus and Pluto. This planetary weave has not been experienced since December 1426 and even then it did not reach the same degree of intensity as the formation taking place throughout the first six months of 2014.

For those now furiously checking Wikipedia for what took place during the third decade of the fifteen century, aside from the natural warring state of our hominid species, please remember that astrology concerns the understanding of the emerging consciousness on Earth, as opposed to focusing on what will happen when any other planetary pairing aligns. Consequently it is virtually impossible to ascertain what was being experienced by those living through that self similar patterning, as there remains little anecdotal stories recorded by those born as pre-cursors of the Renaissance period, let alone the dearth of historical records that time.

We cannot speak of the consciousness of the past since we can only reflect in hindsight. However books, like art and music, are a barometer of where a society is at given any period in history. Their style, subject matter and tone tell us much about the consciousness of the author, and by extension, how he or she views their surrounding reality. So if we correlate differing steps of this cosmic dance across our experience of time, we can see that this interplay has been part of the background hum when some of the most important shifts in culture took place, resulting in some seminal publications that have shaped human consciousness: Plato’s The Republic; the Bible and the Qur’an; Dante’s Divine Comedy; Machiavelli’s The Prince; Shakespeare’s first publication; Marx’s Communist Manifesto; Coelho’s The Alchemist; Mary Wollstonecraft’s A Vindication of Rights of Woman; and George Orwell’s 1984 to cite but a few. Their impact on human society is to challenge and transform the underlying framework extant at the time. Yes, each creation was seen at the time as being subversive by the powers that be, but ultimately, over time, each in their own way ushered in a differing way of viewing the world. That is what you are being afforded – a new way of being.

Fundamentally this “T-Square” champions a more self-aware model of autonomy that recognises our frailties and limitations without repudiating the rights of others. If we recognise that every soul is on its own journey towards a more integrated, honest and purposeful way of being and that we are essentially “unfinished” in our soul development, then we can cultivate relationships that are more compassionate, understanding and supportive, which in turn will help us create a new social reality.

Andrew’s private practice is in Blackrock, South Dublin. For further information on consultations, workshops or classes, or to receive his free newsletter, email dastroc@gmail.com, text 086 8823554 or join him on Facebook. 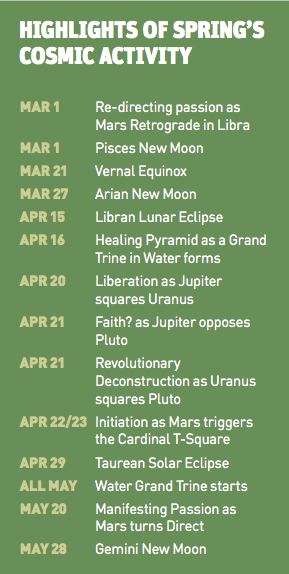 Andrew’s private practice is in Blackrock, South Dublin. For further information on consultations, workshops or classes, or to receive his free newsletter, email dastroc@gmail.com, text 086 8823554 or join him on Facebook at https://www.facebook.com/andrewdhsmith

Boost Your Vision Board with the Power of Feng Shui, Amanda Collins

Moving from Fear into Love with the help...

Astrologer Andrew Smith ‘Rebirth of the Light Within’