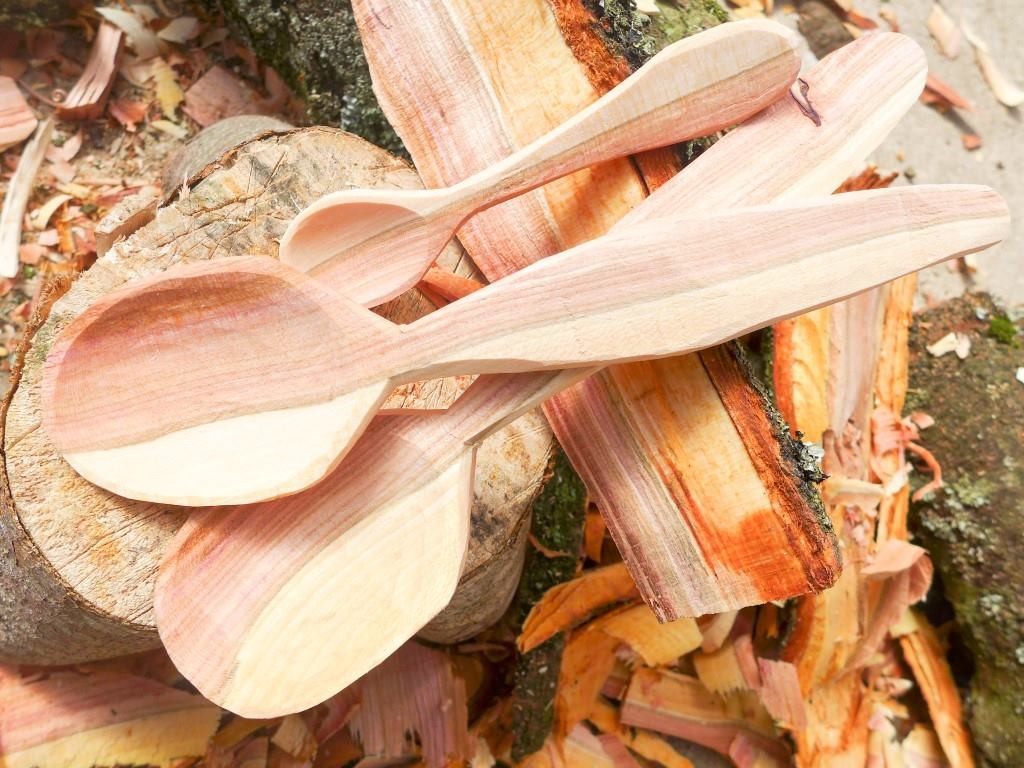 Last summer I had the honour of helping to organise the Earthsong Craft and Creativity camp with the theme of healing through making and doing. This is of course a grand claim, but one in which I believe passionately. I have been carving spoons for a year or two now. It began as an exploration and a way of filling winter evenings. Very quickly, however, I became engaged in the process. As time has passed it has become more of a practice.

I struggle with meditation. I know, everyone does. Isn’t that the point? I will be honest here, I struggle with mindfulness, meditations and mantras. My mind has always been too busy and restless. Working with my hands allows me to clear my head. Razor sharp tools tend to help with concentration. I don’t think when I am carving a spoon. Well I might think, “Oh I’m going to do this” or “I’m going to use such and such tool”, but when I begin to carve, I’m not thinking. Not in words. There is a link between my hands and that creative notion in my brain. Any artist or craftsperson will recognise that. It is outside of time, but also very conscious, very present. We have opposing thumbs and fingers. It is what defines us and separates us from all other life. It enables us
to manipulate things in a way that no other being can. Well, maybe an octopus. The point is that those thumbs and fingers are linked with the creative, inventive process and it happens at a deep and intuitive level.

I began teaching others last year with a Spoon Day and then again at the Earthsong Craft Camp. I noticed how engaged people became. I also noticed the value of working in groups. People find it easy to interact with a common task to be performed. It makes connection much more comfortable. I think this is especially true for men. It can be hard to access and feel a part of a community. Making and doing and working together provides a door into a little world.

I was lucky as a child. I had a father who made things and fixed things. He taught me a little about using tools and how to do things. Mostly however he left me with the confidence in my own abilities to just get on and do it. Learning to carve and make spoons, then teaching others has been quite a journey for me and one which I didn’t expect when I started out. It is lovely at the end of a workshop when I see people with the things that they have made. I love that they have learned skills and how to use simple tools. Mostly though, I hope they leave with a little bit of the same confidence my father gave to me. On a personal level, the last two years have been a difficult time in lots of ways. Working with my hands making spoons and other things has kept me grounded.

Recently, a good friend paid me a lovely compliment. They said I had changed, that I was softer, calmer, more gentle and approachable. I hadn’t seen that in myself and it was nice to hear. When I go out gathering pieces of ash, blackthorn, sycamore and willow left behind by the hedge cutter and sit down to start carving, I will give thanks.

Nick Clayson is an architect, craftsman and yurt maker.

Growing Your Own Fruit in Ireland, by Hans...

The Great ReSkilling By Davie Philip

The Wonder of Tomatoes – Who’s Got the...

One Day Introduction to Permaculture this November with...