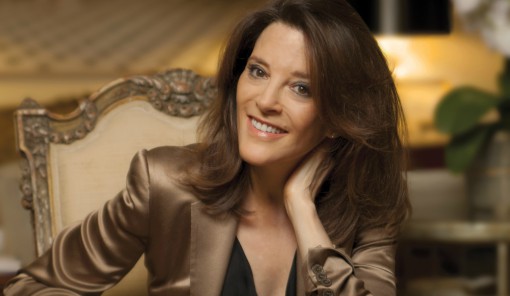 In this evening talk, Marianne Williamson will inspire you to create miracle mindedness in your life. Miraculous transformations occur when we change the nature of our thinking from fear and limitation to faith and love.

Marianne Williamson first entered the public eye in the early 1980s when she began speaking in front of small groups about  A Course in Miracles, a set of teachings she describes as “a self-study programme of spiritual psychotherapy.” Her talks became enormously popular and soon attracted hundreds, even thousands, of people each week. 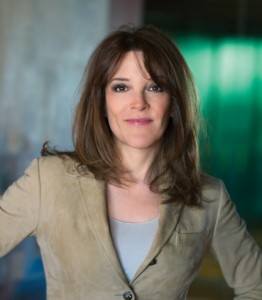 Now an internationally acclaimed spiritual author and lecturer, six of her ten published books have been New York Times bestsellers. Her first book, A Return to Love, is to date the biggest selling book of interpretation about the spiritual thought system found in the book A Course in Miracles. The central message in this book seems to be that nothing in the material world is independently real but everything, from the shoe on your foot to the famine in Somalia, is an artificial creation of individual consciousness. Williamson is known for bringing new age perspectives to the mainstream, and her book is a must-read for those interested in seeking spirituality.

Williamson is an unusual public figure, an activist who insists that change is too important to be left to our leaders. She feels it’s the most exciting time to be living and feels it’s an urgent moment in history.

The ego loves great highs, Williamson says, but also manufactures calamities, and we are brought up to expect that events and circumstances can make or break our sense of wellbeing. The enlightened person, however, sees that their internal state determines how they see external things. Therefore, Williamson believes everyone should have a spiritual practice.

“With prayer, meditation, forgiveness, and listening to our own internal guidance, we are open to receive the messages of the higher self, and then we are led in concert with other people to do great things,” she explains.

Miracles start to happen when we decide to love ourselves. Williamson says that she used to put miracles in the ‘pseudo-mystical-religious garbage category’. She later realised that it is in fact reasonable to ask for them. A miracle does not have to mean turning water into wine. It is simply the occurrence of anything that was previously considered impossible. When we decide to have a certain openness of mind and are committed to change, anything that seems beyond us can be offered up for transformation.

A famous passage from her book, considered an anthem for a contemporary generation of seekers, is often mistakenly attributed to Nelson Mandela: “Our deepest fear is not that we are inadequate. Our deepest fear is that we are powerful beyond measure. It is our light, not our darkness, that most frightens us. We ask ourselves, who am I to be brilliant, gorgeous, talented, fabulous? Actually, who are you not to be?” It is a fantastic, inspiring question.

Williamson’s teachings make sense: love in our minds produces love in our lives, and it’s only by surrendering to those things that form walls around our hearts, we can attain the true authentic self. For most of us that means turning inward and talking a walk inside, but that’s just the real beginning – to find the magic and return to who you are.

Marianne Williamson will be speaking at the Stillorgan Park Hotel in Dublin on April 25th.