The Burrito Boyz – Gastronomical Giving from US Teens Who’ve Made over 40,000 Free Burritos! By Elva Carri 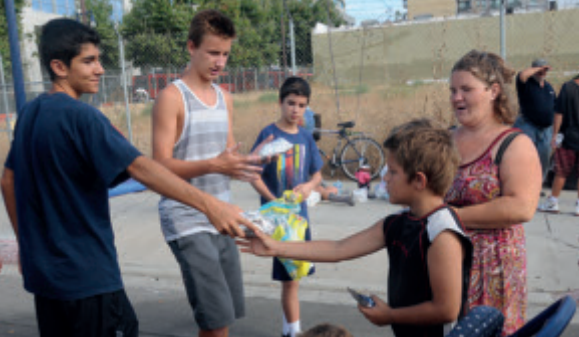 While the teenage years are often seen to be a time of hanging about or causing trouble, it’s increasingly understood as an idealistic and aspirational time in an individual’s life. With the right mentors leading the way, there’s no telling what our teens can achieve. Recently, San Diego’s homeless community has seen this enthusiasm for positivity through a very tasty initiative.

A group, nicknamed The Burrito Boys, are giving of their time to brighten the lives and fill the bellies of others by handing out burritos to those who need them most.

Michael Johnson and his wife began the project to help their own son gain a better understanding of the needs of others one Sunday. Now, over 130 Sundays later, more teens and volunteers have gotten on board and in total have made over 40,000 burritos!

And it’s not just about the food. Michael reminds the boys to make eye contact and a connection with the people they’re serving. He says he’s seen a change in his son and recipients have commented on the beauty of the hearts of all the boys involved.

An Sanctóir – A Community-owned, Spiritually Orientated Centre in Co. Cork. By Michael Tanner

Competition Time: Win A Copy of The New...