Light, love and an enlightened new you. 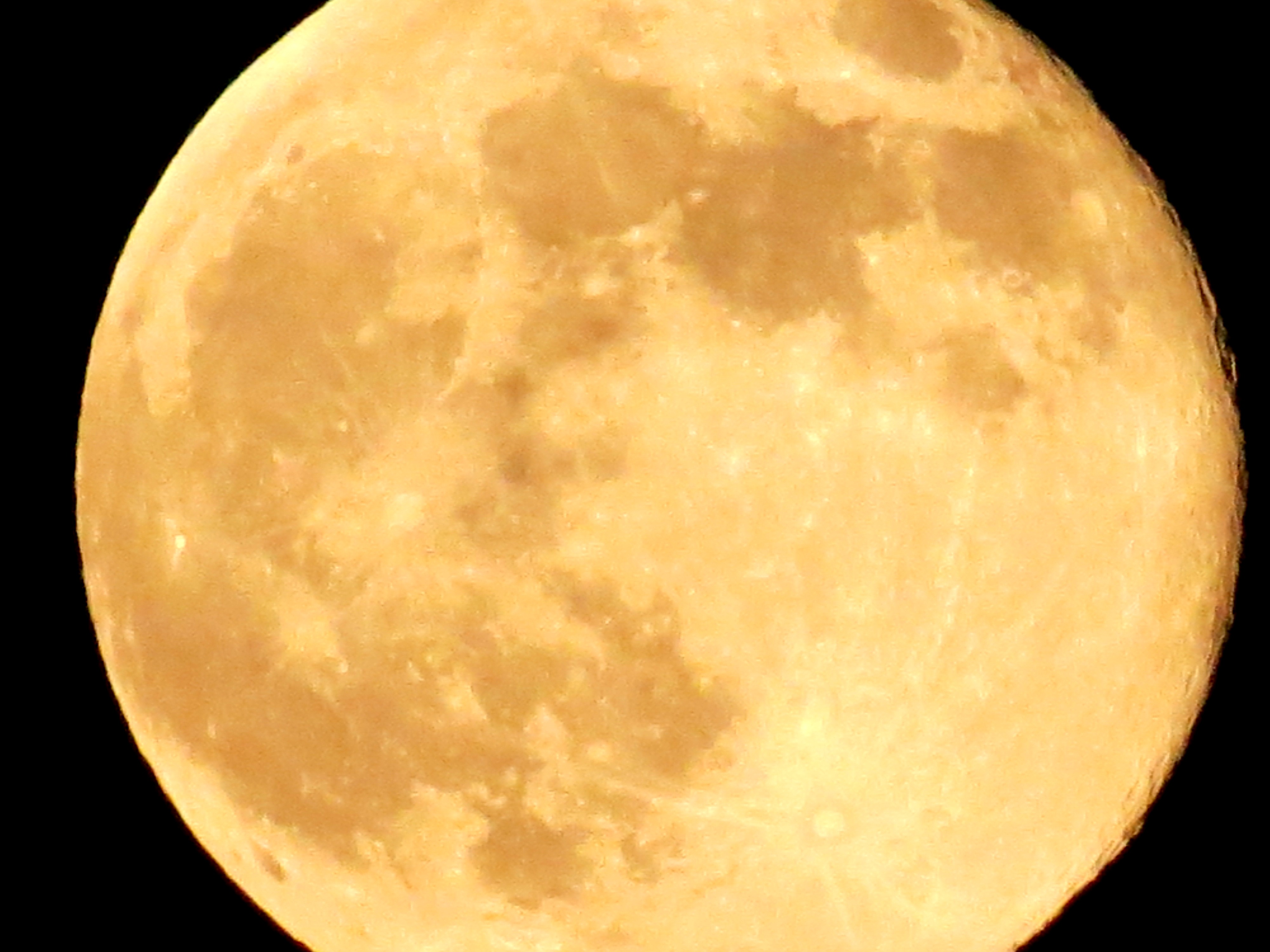 A question for you! Can you recognise the common link between these biblical stories? Noah floating upon the sea in his Arc; Moses labouring on a mountain transcribing the Commandments; Elijah fasting on Mount Horeb; the people of the City of Nineveh repenting their ways; Jesus fasting in the wilderness; and Jesus appearing to humanity after the crucifixion?

Myriad spiritual traditions speak of a set of common themes interwoven into the notion of ‘40’ – ritualistic cleansing, purification, prayer, inner reflection, stillness in preparation for a renewal of spirit and ultimately a re-birthing of the light within. The internalised conflict and testing of each of these stories ends with an orb of light bathing the seeker in a glorious radiance; having emerged from a cave, mountain top or desert illuminated, enlightened and at peace. All traditions agree that the time it takes for your spirit to be renewed and sense of hope and awareness to emerge is 40 days!

Our stories are ultimately cosmic ones, as humanity is embedded in a vast field of intelligence, interlinking the above with the below. Our myths retain the knowledge of our stellar origins encoded in the lives of those who have inspired our spiritual traditions and this 40 day purification ritual is the story of the Light Bearer, Venus.

Every 18-20 months Venus appears to reverse her direction, sojourning within a particular zodiacal sign, transmuting light  and thereby facilitating a re-birth of the archetypal pattern associated with that sign. This re-birth, or Renovatio, takes place during the midpoint of this reversal process, which happens on January 11th, when Venus (love) couples (conjoins) with the Sun (Light), having started on the Solstice, December 21st and lasting until January 31st. 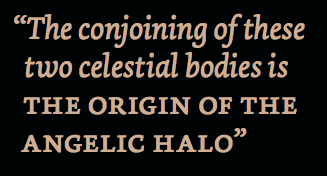 Okay, the day count of the 2013/14 retrograde cycle is actually 41 days, but if you average out this regular phenomenon over time, you get 40 days. The importance of this winter’s re-birthing is the uniqueness of the cosmic conditions that speak of the seeding of a new ‘ideal’, concerning the creation of conditions on the earth to house a new form of love-consciousness that will infuse our personal and collective psyches for the coming 8 years.

As Venus starts her descent into the beams of the Sun on the Solstice, she starts to radiate in an increasingly luminous hue. As Venus approaches the Sun, she will become completely surrounded by Light. Engulfed by the Sun’s rays she will no longer reflect her own light as she is suffused with the Light of Spirit. This alignment symbolically depicts the process of shedding all earthly attachments and desires as the light of consciousness cleanses and en-light-ens the Spirit, generating an aura, or halo, of pure blue-white light in the process. The conjoining of these two celestial bodies is the origin of the Angelic Halo that surrounds those who have consciousness brought together, pure love and pure consciousness. 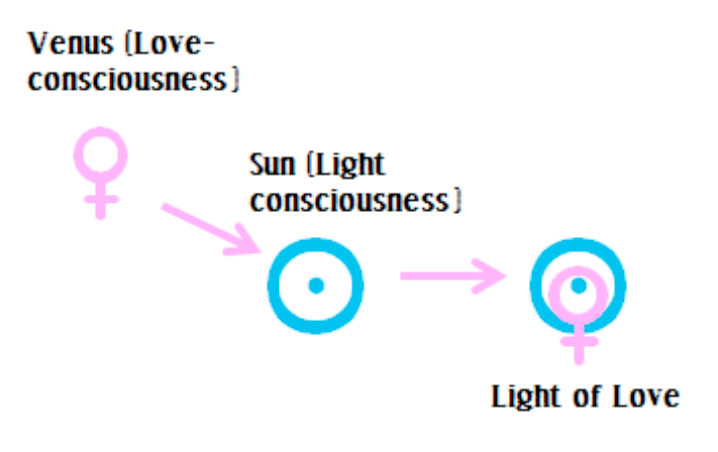 For those with good memories, the themes that are emerging for you now are rooted in the thought-forms you created some 8 years ago between December 24th 2005 – February 3rd 2006. Those value-ideals matured during four subsequent phases during the periods of July 27th – September 8th 2007, March 6th – April 17th 2009, October 8th – November 18th 2010 and 15th May – 27th June 2012. Hence this winter’s Renovatio highlights the release and letting go of those values that have served your emotional development over the past 8 years and the ensuing re-birth of values that will serve to enlighten your sense of love and appreciation over the forthcoming 8 years.

This 41 day journey over Christmas and into the New Year is therefore an ideal time to turn away from both your world and the intense challenges that are emerging in the world in general, throughout December and January, and to reflect on heart based themes that were forged in late 2005 and early 2006 and what, if any, changes you now need to make, so that your consciousness can enlighten.

In preparation to consciously receive this infusion of Light, I would like you to cast your eye over the words contained within the Venusian Bubble map, reflecting on the emotions and images that are triggered by those words, focusing specifically on how those words have been for you over the past two years of your life. 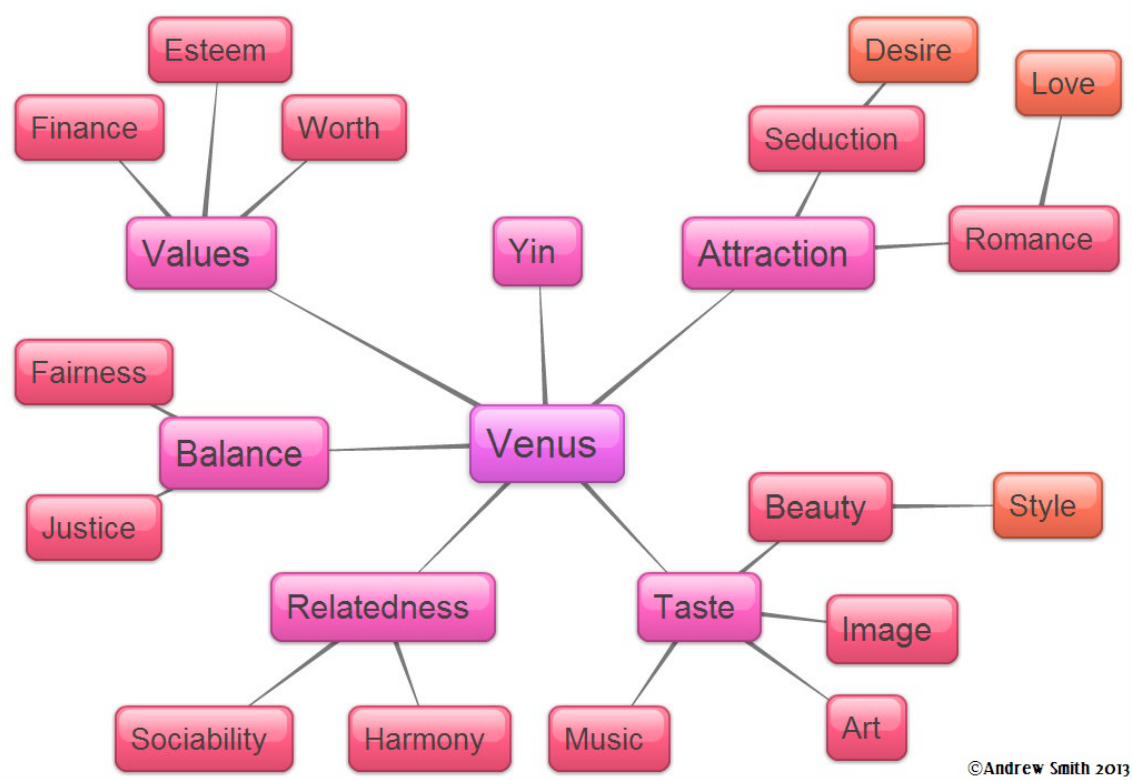 If you find that a particular word or concept, feels uncomfortable, pause and take a note. During the first stage of this process, from December 21st – January 10th, wherein you descend into your dark, stripping you of your ego-mind, I would like you to meditate and hold a space around the themes in your life that arise associated with that word. Can I ask you to reflect how that concept is manifesting in your life and specifically when you interact intimately with those in your life?  Do you really value that side of yourself? Do you take the time to nourish that part of you? If not, why?

As you merge your light with that of the Divine Light on January 11th, this day is one to set constructive intentions concerning your Self-love, Self-valuation and Self-appreciation. I would ask you to hold a space for the aspect of this Venusian archetype within you that feels lacking in joy, balance or integration. Visualise that word, or an image that that word invokes for you; place it inside an imagined pentagram, mirroring the quinary symbol that Venus actual will make through space/time on January 11th; and let the synergy of this Renovatio replenish the light around this un-integrated part of yourself.

As you ascend back into the world of matter and form between the 12th and 31st January, you will start to see the fledgling seeds of the intentions set germinate and sprout in the world around you as create reality with your replenished light-essence.

Since we live in a thought generated universe, by allying your thoughts with your values, imagine what that could mean for your life and for those around you? Phenomenal!

Andrew’s private practise is in Blackrock, South Dublin. For further information on consultations, workshops or classes, to receive his free newsletter or to order a copy for Christmas of the book he co-edited and produced Transpersonal Astrology, email dastroc@gmail.com, text 086 8823554 or join him on Facebook.

Andrew’s private practice is in Blackrock, South Dublin. For further information on consultations, workshops or classes, or to receive his free newsletter, email dastroc@gmail.com, text 086 8823554 or join him on Facebook at https://www.facebook.com/andrewdhsmith

The Aha Moments! By Amy Kokoska – Bringing beauty to life, work and the world.

Sneak Peek: Flow With the Stars