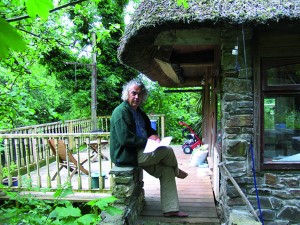 I was teaching Yoga and running a centre in the UK. Then, after I moved to Ireland, I started Eireventure Paragliding School. I also started Second Byte, selling second hand Apple computers to provide income on rainy days.

Alan Dare, who had a Health Food shop in Bantry, had found Grapefruit Seed Extract to be the best way of dealing with Candida, and would encourage his customers to try it. Two customers wrote a book about it in German, which was very successful. The publisher sent them a disc with an English translation which they could not open as they had a Mac, which I had sold them, and the disc was in a different format. They gave me the disc and I ended up rewriting the English version, which gave me lots of scientific information and some money to invest.

That’s how the Aisling Foundation, who specialise in Grapefruit Seed Extract, got started. Aisling is our youngest daughter and is Downes Syndrome.

We now have a range of Grapefruit Seed Extract products and a business that started in a one room shack and now exports all over Europe.

The realisation that Life guides and supports us, in so far as we allow it to, is my core belief; and I thank Life for providing me with such a wonderful gift that enables me to make money using a waste product that helps people to become more healthy.

Optimise your Health, Personalise your Diet

Full Interview With Tom Campbell: Are We Living...

A Standing Ovation for Elizabeth Gilbert at the...

The Codes of the Cosmos