Now Trending:
‘Creativity and This Liminal Space’ by Monica Haughey
Spirit-Inspired Creations by Tahnee Morgan (With an Amazing...
Imagine Orgasm: The Teetering Moment
Embodying the New Human: A Conversation With Jacqueline...
Positive Nights Presents: The Era of Awakening With...
Positively Newsworthy: The Spring 2021 Edition
Welcome to Well-Being: A Programme Promoting Children’s Mental...
‘Real World Realisations’ by Sandy Newbigging
‘The Sweet Spot for a Positive Life’ by...
Natural Boosts: Take Control of Your Health This...
Hugh & The Manatee: Mary Helen Hensley’s New...
Celtic Soul Journeys: A Conversation With Amantha Murphy
Imagination Arises: A Conversation With Hema Vyas
Cresting the Crypto Wave: Is Cash Still King?
Positive Vibes: The Spring 2021 Edition
Bring in the New: A Nettle Ritual to...
Somega Boost: The Benefits of Liposomal Vitamin C
The Taste of Spring: Happy Pear Recipes to...
Spirituality in the City: Spring 2021 Edition
Sneak Peek: ‘The Realm of Imagination’ by Anna...
Supporting Community Wellness: We Chat to Health Stores...
Our Spring Issue Hits the Shelves
Turn Over a New Tea Leaf
Be Yourself Fearlessly: An Evening With Anita Moorjani
Sneak Peek: Oracle Girl on the New Embodied...
Health Stores in Dublin – Finn Murray of...
In Your Element – Calculating Your Feng Shui...
Positive Nights Presents: Oracle Girl – The New...
Tantric Massage
Home Positive News & Interviews Health Stores in Dublin – Finn Murray of ‘The Hopsack’, Rathmines
Positive News & Interviews

Health Stores in Dublin – Finn Murray of ‘The Hopsack’, Rathmines

What on Earth? is The Hopsack 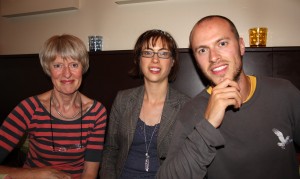 In 1979, during a wave of interest in Macrobiotics, social worker Erica Murray and auctioneer Jimmy Murray sank their life savings into opening up a fruit & veg store called “What on Earth?” A few years later, it was renamed “The Hopsack”. Then in 1984, they moved the store to the multicultural hub of Rathmines.

Over the decades, the store evolved as people became more aware of allergies, supplements and herbs. Now they want to focus even more on their original interest in food as medicine. Their recent expansion has allowed for more quality foods to be made available. It also allowed for the addition of a café which caters to the sense of community that is a high priority for the family.

In 2005, a serendipitous dinner led Jimmy and Erica’s son Finn (then an Industrial Designer) to agree to take over the business from his parents. Then in 2008, just before Jimmy passed on, their daughter Kate took a career break from the civil service and joined the family in running the store. Erica, who’s now a Master Medical Herbalist, works in the shop 1 day a week, while Finn divides his work between the store and the family’s farm.

Already famous for their freshly milled peanut butter, the Murray’s next investment is a polytunnel so that they can also provide fresh vegetables for the store. Erica and Finn have also recently taken up beekeeping, so it hopefully won’t be too long before Hopsack Honey hits the shelves.

The Connections Economy by Kathleen Moore

An amazing shop with gorgeous food and great advice from the staff. The Green Machine smoothie is a particular favourite as are the lentil burgers!