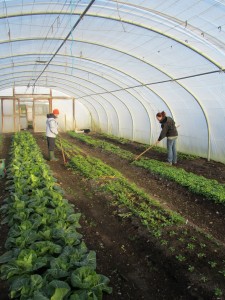 My first “Tunnel Vision” was at Christmas 1984 when I visited the Smiths, in the hills around Ballydehob, who grew vegetables in polytunnels. Probably the only other polytunnels at the time existed at the other end of the country at Eden Plants in Rossinver, Co. Leitrim. When I arrived with my family in Ireland in the summer of 1985, we built the first polytunnel ourselves. Now you see them everywhere, and for very good reason too.

Do you love tomatoes?  Would you like to be eating your first crop of new potatoes as early as June? Do you want lettuce throughout the winter? If the answer to all those questions is yes, then the only option – not only in the West of Ireland – is to invest in a polytunnel!

Polytunnels are an excellent way of increasing home production at a low cost:

·    For growing tender vegetables which require higher temperatures than normally exist in an Irish summer, e.g. tomatoes, peppers, aubergines, cucumbers, basil, sweet corn.
·    For extending the growing season, both in the spring and autumn, e.g. carrots, calabrese, celery, courgette, beetroot, scallions, radish and annual herbs such as dill and coriander.
·    For winter cropping, e.g. winter purslane, mizuna, salad rocket, tat soi, radicchio and lambs lettuce.
·    For plant propagation. Polytunnels can successfully be used for raising plants either on heated benches or even in the soil for bare-root transplant raising.

Another advantage is that a tunnel will allow rather more comfortable conditions for the person gardening or growing during periods of rain or miserable summers.

Here are a few crops ideally suited to Polytunnels:

Climbing  French Beans are an excellent polytunnel crop.  They rarely do well outside unless you have a very sheltered garden.  Seeds can be started in small pots or sown in situ if the soil temperature is above 10º Celsius. Sowing can be done from March until early summer for cropping from late June until late Autumn.  Seeds should be sown about 5cm and 15cm (6”) apart.

Cucumbers are another prolific crop for the polytunnel. One plant can produce enough cucumbers for a whole family over the summer, and you can grow Gherkins for pickling. Sow during April in seed trays at 24-25º Celsius. Pot them when the leaves have expanded, and maintain a minimum of 15º Celsius. Grow in a raised bed in single rows with 45cm (18”) spacing. Plant from early May on. Train them up a string that is buried under the plant and supported by a crop wire overhead.

Tomatoes are possibly the most popular under cover crop. Sow them in early – mid March at 20-24º Celsius in seed trays. After germination, maintain a minimum temperature of 15º Celsius. Pot on once plant has developed a 2nd set of leaves. Beds must have a rich supply of organic matter in the form of well rotted farmyard manure or compost. Potassium is very important for tomatoes and may be supplied using seaweed meal or dust. Plant in double rows with 50cm (20”) between rows and 60cm (2ft)  between plants.

Other suitable crops include Basil, which really thrives in the warm protected environment.  Chilli and Sweet Peppers both grow well in a tunnel. Lettuces take up little space and can be harvested as early as April. Sweet corn takes up a lot of room but is worth it for the flavour of those freshly picked cobs. If you grow Potatoes in a tunnel, you could be tucking into your first batch of new potatoes as early as late May or early June.

Warning: Don’t buy a small tunnel! The benefits of protected cropping will become obvious very quickly and you will become addicted. A good size family tunnel is about 12 to 15 meters long.

On a recent visit to Clare, I met organic pioneer Jim Cronin at his market stall in Killaloo on a Sunday morning. Despite subzero temperatures, all week he had great lettuces and spinach for sale. “It’s called Winter harvesting” he tells me. “The secret is cold-hardy varieties of vegetables, succession planting and double protected cultivation. I had 4 layers of fleece on top of the plants in the polytunnel.”

Finally, if you are new to protected cropping, get advice and visit gardeners who grow in polytunnels. The Organic Centre are running one day courses and also feature 8 polytunnels of all sizes and various cropping.

Autumn Sneak Peek: The Sweetness of Sour in...