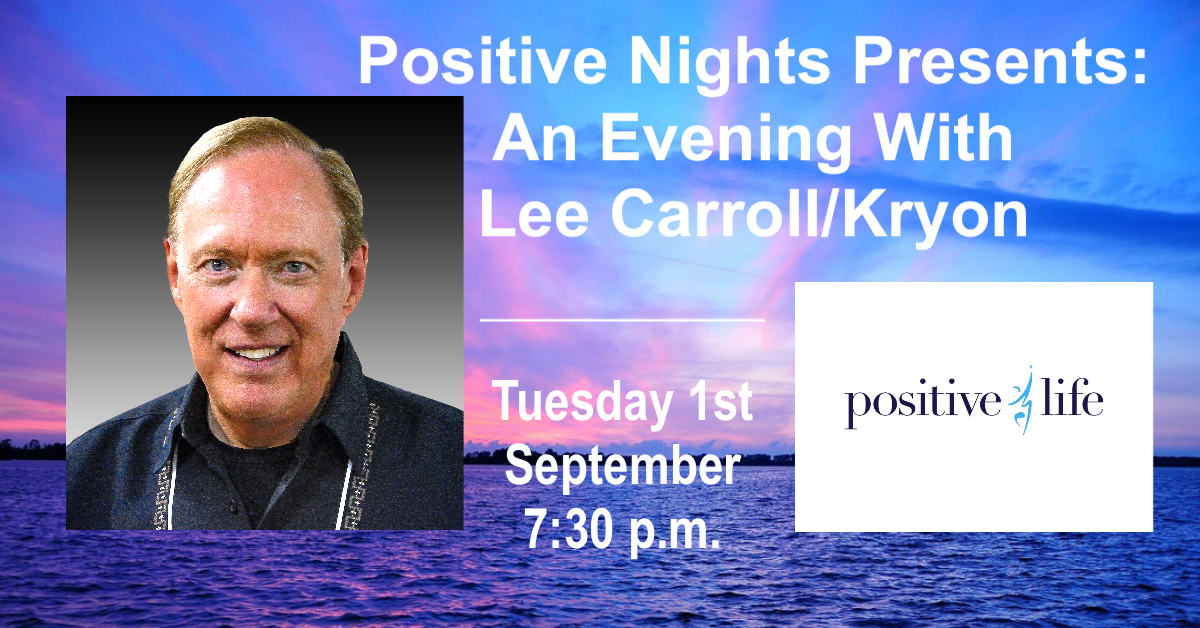 We are very excited to share the details of our next Positive Nights Zoom event: an evening with the legendary Lee Carroll, channeller of Kryon!

Lee ran a technical audio business in San Diego for 30 years, before being “hit between the eyes” by his spiritual experiences. The year 1989 marked a turning point for him, after two unrelated psychics told him that he was accompanied by a being named Kryon. Lee tentatively began to go public with his channelled writings from Kryon, initially sharing them with the metaphysical community of Del Mar, California.

Lee and his spiritual partner, Jan Tober, started the “Kryon light groups” in Del Mar in 1991, and soon moved from a living room setting, to a Del Mar church. The Kryon organisation now hosts meetings all over the globe, with audiences of up to 3,000 people. In 1995, Lee was asked to present Kryon at the United Nations (U.N.) in New York City, before a U.N.- chartered group known as the Society for Enlightenment and Transformation (S.E.A.T.). The meeting was so well-received that they were invited back six more times, in 1996, 1998, 2005, 2006, 2007, and 2009.

Lee is the author of fourteen Kryon books, and co-author of The Indigo Children, An Indigo Celebration, and The Indigo Children: Ten Years Later. These books introduced the world to the term “Indigo Children” in 2000, spawning many follow-up books by various authors, a movie, a documentary, and widespread interest around the world. There are now almost one million Kryon and Indigo Children books in print in over twenty eight languages worldwide.

Lee continues to write and travel from his home in San Diego, California. He has just released a new movie called The 1 Field.

During our evening with Lee, we will chat with him about what he is doing and the new messages Kryon is bringing in. This is a rare opportunity to hear him speak about his amazing experiences!

This event will take place over Zoom on Tuesday September 1st, at 7.30 p.m. The cost of this event is a €10/15 donation. Login details will be emailed to all ticket holders the day before the event.