Positive Nights Presents: Diving into the Miracle of Kingdom Water 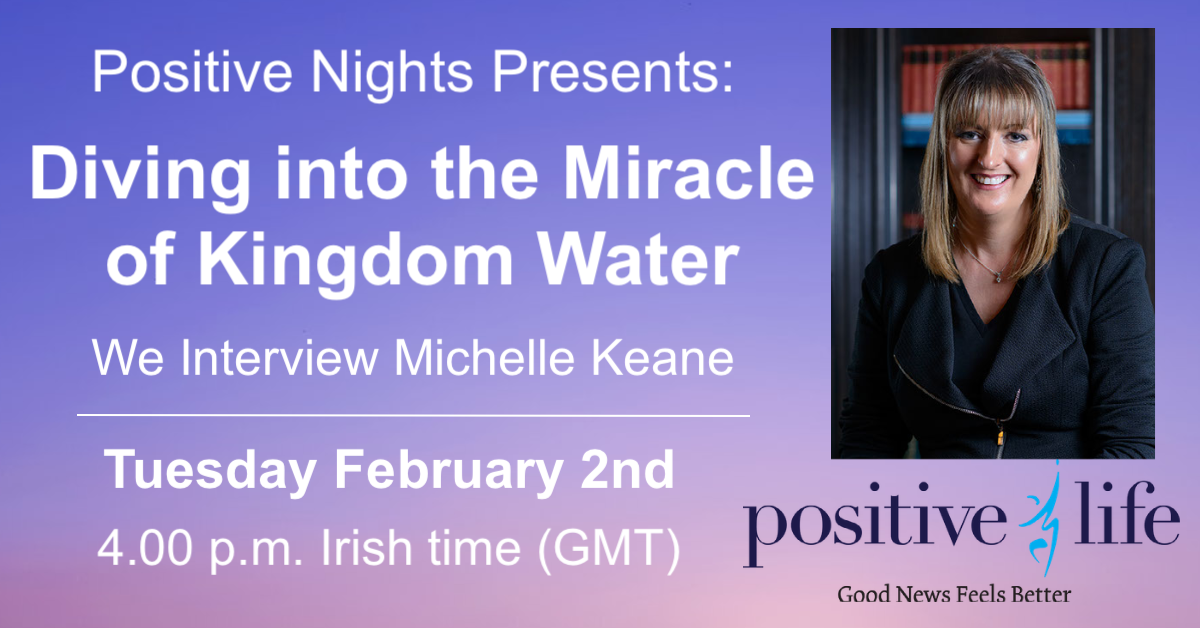 Michelle Keane is a Co Kerry-based interior designer and public speaker, whose spiritual journey means a great deal to her. Her journey began in May 2018, when she paid a visit to the sacred well of the Archangel Michael in Ballinskelligs, Co.Kerry. Over the following two years, she was sent on a ‘most strange and wonderful journey’: seeing visions granted to her by spirits and angels; receiving messages from her ancestors; meeting divine people who helped her on her path; and uncovering seven ancient wells on her land in Knocknagoshel, in Northeast Kerry.

Michelle was amazed to uncover an old, long-forgotten source of pure fresh drinking water. This water contains over 66 minerals and boasts a distinct taste profile. It was brought to the surface by dynamic, modern methods, and has now been branded as Kingdom Water (which also forms part of the title of Michelle’s book).

The proud Kerry woman explained the significance of this name to us: ‘The angels told me that the water’s name should contain a reference to God, so what better name to choose than the name of my own county? The Kingdom … suggesting the Kingdom of Heaven.’

Michelle’s book came about after she began to realise that she would need to keep a record of all that happened to her, beginning with that fateful day in Ballinskelligs. She began to write a diary, filling it with the events and visions that she could hardly believe.

‘Kingdom Water’ tells the story of Michelle’s spiritual journey. She travelled to India, moving through the Himalayas and stopping off to visit Neem Karoli Baba’s ashram in Kainchi, Dham, Badrinath and Devprayag, where the two holy rivers Alaknada and Bhagirathi meet to form the Mother Ganga. Here, Michelle received a blessing for her own Kingdom Water.

Michelle has released the water, as her ancestors and angels directed her to do, and she now waits, knowing that her bit is done, and the next stage will soon begin. Michelle believes that this water will reach many people and bless their lives.

During our evening with Michelle, we will discuss her amazing story, the healing benefits of Kingdom Water, and the inspiration that guides her. The audience will also have a chance to ask questions, following the interview.

This event will take place over Zoom on Tuesday February 2nd, from 4.00 p.m. to 6.00 p.m Irish time (GMT). An event link and login details will be sent to all ticket holders the day beforehand. Check your spam folder if it doesn’t arrive, and contact us at positivelifeevents@gmail.com if it isn’t there. A replay will be sent out the following morning, so don’t worry if you can’t make it live.