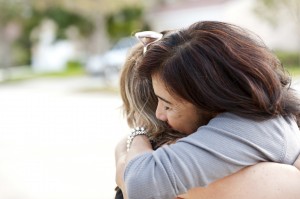 There’s a science to creating a world that’s happier, says neuroeconomist Paul Zak, who is also known as Doctor Love because he hugs everyone, and has been suggesting that people hug eight times a day as a way to connect to others. He thought he’d try this in New York City.

Calling the event Love Night, he thought he’d be able to design an experience to get people’s brains to produce oxytocin – the brain chemical that makes people cuddle and bond – and then watch them connect with each other.

Along with psychologist Emanuele Castano and writer Kio Stark, they designed events for people to do what they thought might cause oxytocin release. They also created thermochromic T-shirts for everyone to wear. These shirts change colour when they are warmed, so they actually changed colour when people hugged.

On a Friday night at 7pm, over 500 people show up. Dr Zak welcomes everyone. “I discussed the science of oxytocin and then asked a guy next to the stage to come up and I gave him a hug to model hugging a stranger and show how the shirt changed colour. Then I appointed everyone with the special T-shirts to be hug ambassadors. I jumped off stage started saying hi and hugging people.”

Then, people started circulating and hugging each other. And talking. And spending time with strangers. “Something magical happened. Something transformative. People were smiling and laughing. After about 100 hugs in three hours I felt ‘high’ from the constant oxytocin rush,” says Dr Zak.

Many others felt similarly transformed. They collected data and found those attending Love Night said they felt closer to those in attendance, to New Yorkers in general, and reported feeling more compassionate and happier than before they arrived.

More thoroughly explained, oxytocin has been popularised as the love molecule that gets people empathetic and generous. It’s the chemical that motivates mothers to care for their children, or inspires two strangers to connect. Oxytocin release is a virtuous cycle: the more of this cuddle molecule your brain pumps out, the more your brain is triggered to release it.

So the message is clear – do what the doc says and get your eight a day.

Listen Your Way to Peace – Calmerceuticals™ Before...

We’ve got the Juice on the Latest Pop-Up...