Yoga for HOPE, by Kim Doherty 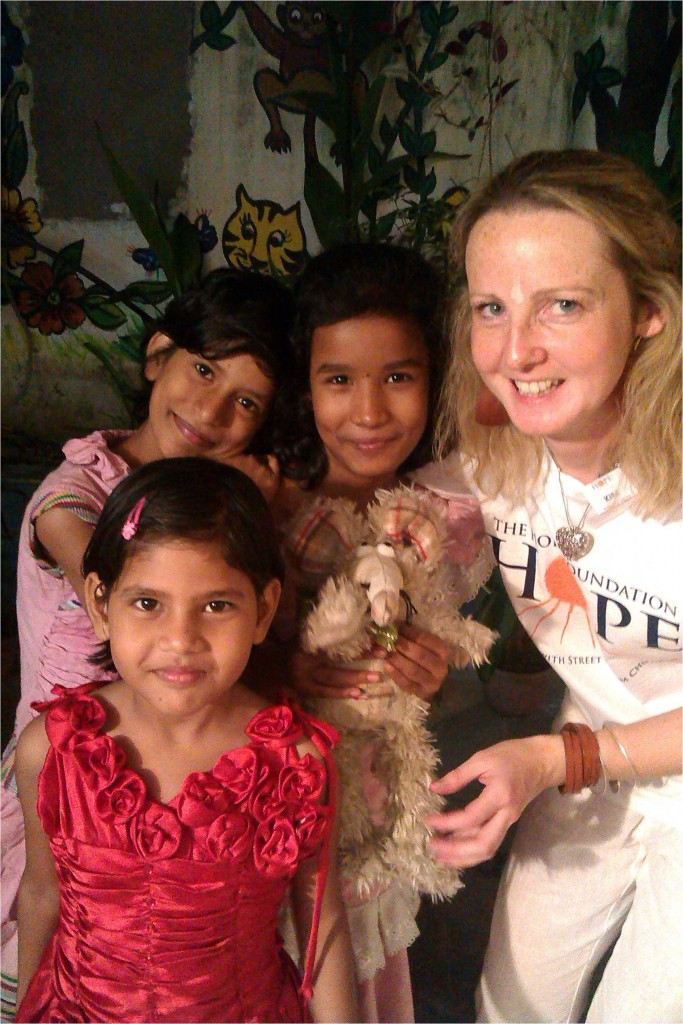 Words do not do justice to the diversity of India or to my experiences there. My journey to Kolkata began when I heard about The Hope Foundation’s Yoga for HOPE initiative, where you bring the benefits of yoga to children in the charity’s care who have been rescued from abject poverty or child labour on the streets. Having experienced the benefits in my own life, I wanted to share my love of yoga with the children and their carers.

On arrival in Kolkata the scale of the poverty soon becomes apparent. Looking out the windows from the safety of the bus, I see a very different world to the one I had left behind 24 hrs earlier. Our first visit was to a children’s home and we were greeted by smiling children who took me by the hand and showed me around. These children attend school and are cared for by house mothers like family. We visited girls and boys homes as well as coaching and training centres run by The Hope Foundation.

The moments that are etched most deeply in my heart are those I experienced out with the Night Ambulance – this is where HOPE social workers travel the streets visiting communities and looking out for children that need urgent care. Imagine if you can, working in Blanchardstown and living under the M50 surrounded by hundreds of people. That is how people live under the concrete highways in Kolkata, as well as on the streets. Here I met four babies less than one month old. Some of the saddest images I saw were little feet at the edge of a footpath. I looked at the size of their feet and identified the Mammy and Daddy and their little children sleeping with the sky as their roof. I found the noise deafening to my senses and yet these people slept.

In monsoon season people stay in the subways until 10.30pm, after which they have to stand against walls, as water rises to knee and thigh deep, so people cannot sleep. I also spoke with a lovely 18 year old girl and we chatted like we had known each other for years. Her second son was in the HOPE hospital having an operation on his feet. Her toddler was on the street sleeping with her, as was her husband. She proudly said theirs was a “love marriage” and not an arranged one.

Later I met a little boy with broken English next to a trolley of paper flowers. His father handed me a flower from his produce, giving me a piece of his livelihood for just speaking to his little boy, treating him as a person, which people on the streets do not experience. I found this so humbling and cherish that flower. This is just an example of the beauty and desolation that live side by side in Kolkata.

At the huge city dump, the dwellings are all made from rubbish. Having seen people sleeping on the streets I begin to look at them more positively as they, at least, have a shelter of some description, though the constant stench and poverty was shocking.

While my goal was to share my love of yoga, I began to understand that part of my role was also to bear witness to the place and people of Kolkata. My encounters with the people I met showed me the importance of HOPE. They provide support to over 60 projects in education, health, training, and child shelter and protection. While I felt I made some impact on the people and children I met, the money I fundraised was of equal, if not more, importance and it was seeing where this money went which had the greatest impact on me.

HOPE provides a holistic approach to development which includes working with the children, their families and the community in Kolkata. They really are changing lives and I am honoured to have been part of the change.

The 2015 Yoga for HOPE is 25th Oct to 4th November and if you’re interested you can email: susan@hopefoundation.ie for more details.

Personal empowerment: What does it really mean?

The Best of Both Worlds – Making Business...

Our Interview With Sarah Gilhooly: The Replay