You’re not too late to grab yourself a little Christmas treat of a subscription to Positive Life – alternatively a nice little gift for someone you love. A year’s subscription covers four issues – Winter, Spring, Summer and Autumn and you can sign up here.

The winter issue is out in stockists and winging its way to our current subscribers. It includes a feature on motivational life coach legend Tony Robbins and his first event in Ireland, his story, his successes and some of the gems of wisdom we’ve learned from him already. We also have a very vegan (very delicious) Christmas recipe from Cornucopia, personalised Feng Shui advice to incorporate the elements and colours that really work for you from Amanda Collins, more great meditation tips for physical health from Sandy Newbigging, positive astrology from Andrew Smith and so much more! As we’re feeling generous, we thought we’d share a sneak peek to the Tony Robbins feature straight away. We’re also giving away a pass to his masterclass to one lucky reader. Enter the competition.

Have a lovely weekend, The Positive Life team. Subscribe here. 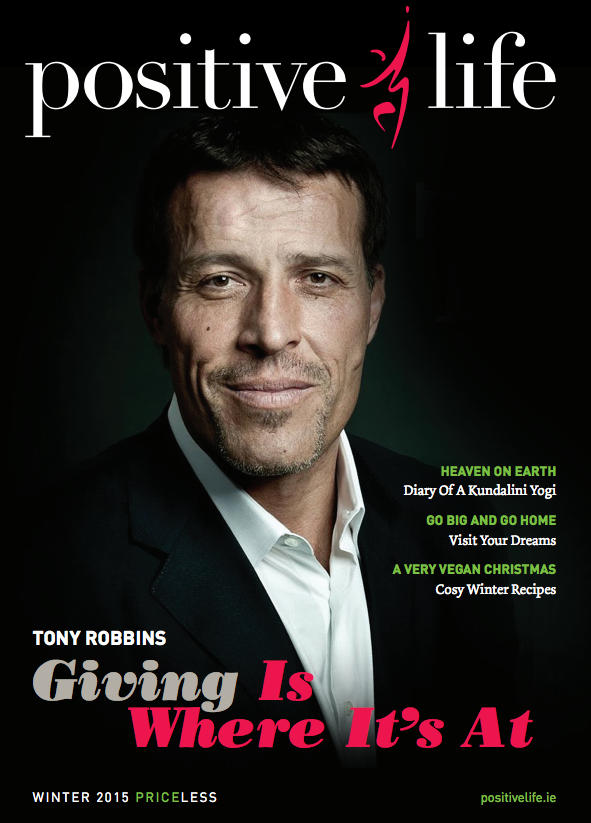 By Elva Carri
World-famous performance strategist, speaker and entrepreneur, Tony Robbins is a fast paced, high energy man who wants to change the whole world – starting with himself and moving onto you and you and you. He has worked with the likes of Bill Clinton and Serena Williams, has received numerous awards and a lot of press. In his Ted Talk, he introduces us to the most defining moment in his life.

He was a kid, at home at Christmas. There was no money, no food and this was down to the actions of his father. But then there was a knock on the door. Someone had brought them food, charity. For Tony’s dad, this highlighted his own weaknesses and flaws, and he left his family. Tony however thought, “Strangers care. If strangers care about me and my family, then I’m going to care about them.”

By the age of 17, Tony had enough money to fulfill one of his first goals, to feed two families for Christmas. The following year, he fed four families. After he fed eight families, he realised he’d need a little help and finally told people he was doing this and got others involved. Last year, Tony’s organisation fed millions.

Join the The Power of Love New Year’s Eve Celebration