Now Trending:
Positive Nights Presents: Oracle Girl – The New...
Truth, Love and Community: Breaking Out of Our...
Mooncup: Simplifying Periods
Thrive On: The Documentary With An Empowering Dream
We Recommend: CNM’s Immune Boosting Webinar
My Family Healthcare Toolbox: What’s True for Me
Luxury for the Hair: We Review Dr. Hauschka’s...
Five Truths for Every New Mum and Dad
Mobility Medicine: Amatsu to Free Up Movement
Truth Or Dare: The Pros and Cons of...
Positively Newsworthy: The Little Things – Autumn 2020...
The Chemistry of Life: Healing With Bio-kinesiology
The Power of Our Life Force: Pranic Healing
The Wisdom of Adamus: An Interview with Geoffrey...
‘Patterns, Placements and Potential’ by Rachelle Hicks
Seed Saving in 2020: Securing Our Future
Inspiration from Joe Dispenza: Breaking the Four Minute...
Announcing: Our New Patreon Community
Turn Over a New Tea Leaf
Deva Premal Nominated for Grammy Award
We Recommend: Health Coach Discussion with CNM
Positive Nights: The Promise and Challenges of Psychedelic...
Interview with Martin Duffy – Director of The...
Mindfulness Based Stress Reduction Course with Eilis Cullen
Doreen Virtue: The angel author shares her transformational...
Tantric Massage
Home Tags Posts tagged with "Potatoes"
Tag:

“Potatoes: More than a Bit on the Side” Campaign with Bord Bia & Aoife Hearne 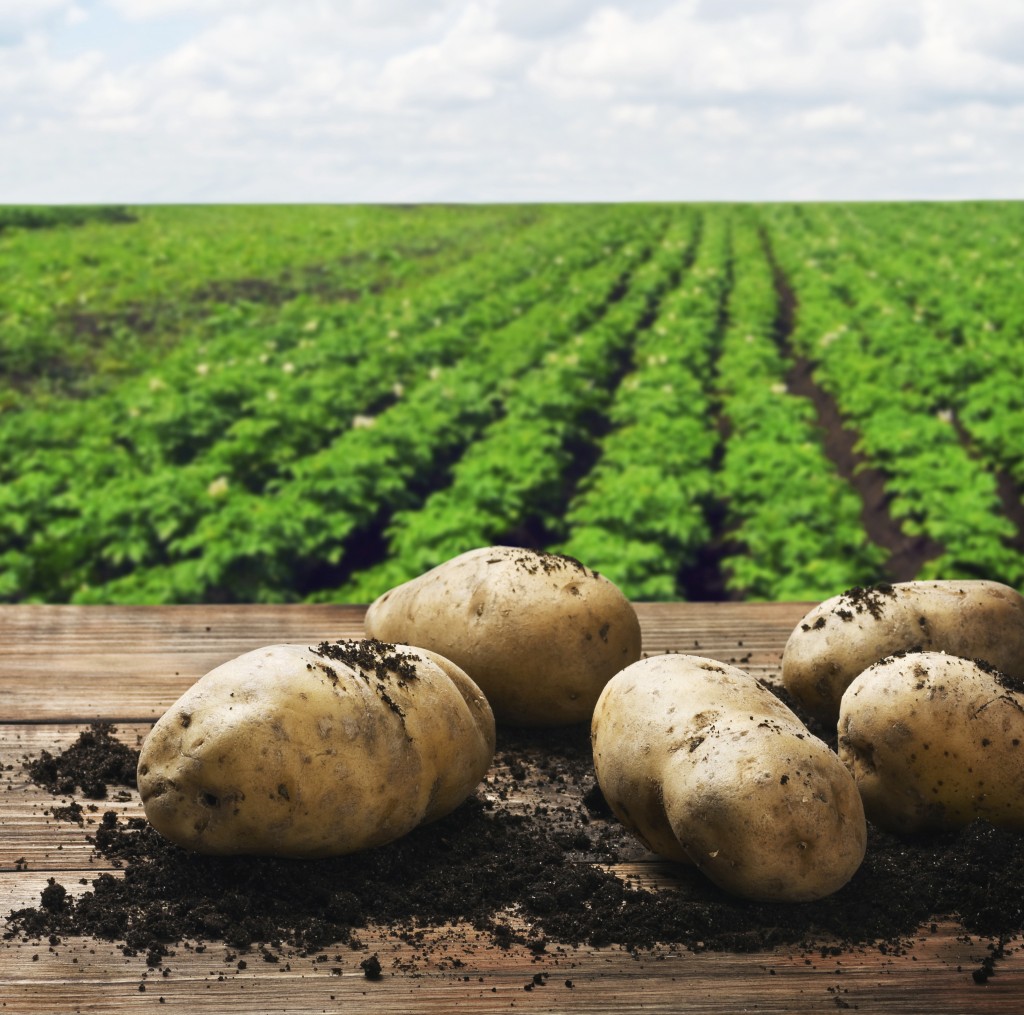 The Irish love affair with potatoes is one that began many centuries ago. This amazing and versatile vegetable, of South American origins, was introduced to Ireland around the 1600’s. Since then the potato has been a reliable source of food for us on the best and worst of times. We in return hold a great love for the fantastic spud! From enjoying them in a delicious Irish stew to picking them up at the chipper on our way back from a night out, there are plenty of ways and styles we can use to cook our potatoes. Bord Bia and its Ambassador, TV Nutritional expert and Dietician, Aoife Hearne, are now bringing the ‘Potatoes, More than a Bit on the Side’ campaign for the generic promotion of fresh potatoes across Great Britain and Ireland. Their main objective is to develop markets for Irish suppliers and to bring the taste of Irish food to more tables worldwide.

This campaign also aims to encourage people to be more adventurous in their use of potatoes by trying out a wide selection of quick and healthy recipes. Speaking about this trend and her new role as ambassador, Aoife said: “It’s really important that we dispel the myth that potatoes are fattening. Potatoes provide Irish people with a very important source of carbohydrates, which are essential for our bodies and particularly for brain function. Potatoes are naturally fat and gluten free, a great source of fibre, Vitamin C and a variety of B vitamins. They also contain three times the amount of potassium of bananas.”

Positive Food: More than a Bit on the Side 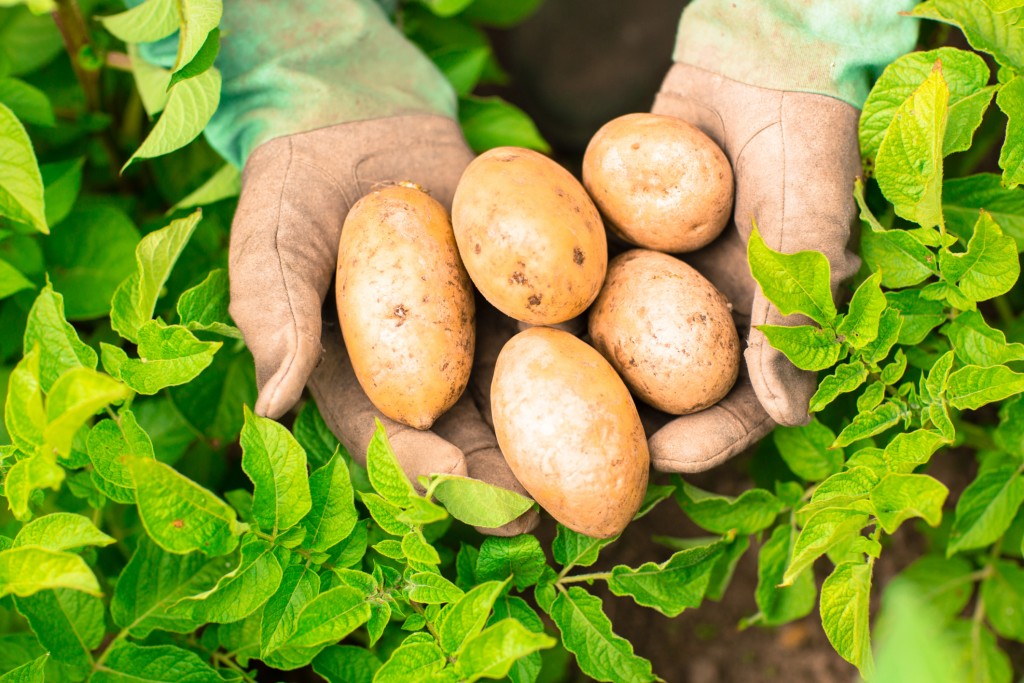 From our Spring 2016 issue. Be the first to read the next issue of Positive Life in print –Subscribe.

Well I am not only bi-lingual, I am also bi-spudial, meaning I enjoy waxy and floury potatoes. Having left Germany behind in 1985 in the knowledge that I would probably never again eat Sieglinde,  the potato I grew up with and Bamberger Hörnchen, the potato I came to love most, one of the first horticultural activities I got involved in in Ireland was growing a field of potatoes with two neighbours. We grew Roosters and Golden Wonder.

Potatoes in space, on rooftops and as part of a healthy diet

The Irish government has reported that there has been a 25 percent fall in the amount of potatoes sold in Ireland over the past ten years. And while NASA and the Peru-based International Potato Centre will start cultivating potatoes in Mars-like conditions on Earth, with the hope of eventually building a controlled dome on Mars capable of farming the ancient crop, blue potatoes are now being grown on the roof of JFK airport in New York. Back down to earth Bord Bia, along with the Irish Potato Federation and Irish Farmers’ Association and in conjunction with the Potato Council in the UK, have received EU funding for a three year potato promotion campaign launched officially last October sporting the tagline: “Potatoes: More than a bit on the side.” Potatoes are super healthy vegetables, there is no question: They contain five times less calories than rice or pasta and have twice as much protein as wheat. They supply us with important minerals like Magnesium, Iron and Phosphorus and they are higher in Potassium than bananas. Their starch content is very filling, so potatoes can prevent overeating and are highly suited to a healthy and balanced diet. Did you know that floury potatoes are higher in starch than waxy potatoes?

Potatoes are part of a worldwide culinary heritage

In Germany, the potato is a king of foods and in the region I come from, Franconia, the knobbly, horn-shaped potato, ‘das Bamberger Hörnchen’ is a precious ingredient that has survived because of the region’s grow-your-own culture and now commercial growers have pledged to grow the ‘Hörnchen’ on a bigger scale. In Ireland, with 540 growers, the bulk of the potato crop is grown by about 200 and only 15 produce salad potatoes. I believe the downward spiral of potato consumption is coming to a halt and according to Kantar, a retail-analysis firm, once every 0.6 seconds someone buys potatoes in Ireland. And weren’t there crisp sandwich cafes popping up in Belfast and Dublin? Something I see in my work at The Organic Centre is the renewed interest in different varieties and a trend in gardeners growing more Earlies like Orla and Casablanca and more blight resistant varieties like Bionica, Setanta and the Sarpo family of Mira, Axona and Blue Danube. Last year a display of 140 varieties of potato won gold at the Chelsea Garden Show. The beauty of growing your own potatoes lies in the versatility from growing in lazy beds and raised beds to container growing, from growing under mulch of straw and even black plastic
to two crops of Earlies in polytunnels. Potatoes are eminently suitable for No-dig gardening!

The Potato is one of the main ingredients in many national signature dishes around the world: Gnocchi in Italy, Tortillas in Spain, Moussaka in Greece, Baked Potatoes in USA, Kartoffelsalat in Germany, Gratin Dauphinoise in France, Roesti in Switzerland, Alu Pakora in India and in Ireland in Stew, Boxty and Colcannon. Wedges are a great secret weapon to get children to eat more big, old-style potatoes. At home we roast them on a really high heat. They cook in the same time it takes to cook frozen oven chips. However, don’t fall for washed baby potatoes! Farmers have to plant twice as much seed potato, and their crop can be rejected if the “skin finish is not right”. It is easy to cook with potatoes every day of the year without using the same recipe twice. They can be combined with nearly all herbs and spices, Nutmeg being the classic, and can accompany meat and fish or be stand alone vegetarian highlights.

Positively Newsworthy – Irish Crisps with a Conscience, By Elva Carri

Crisps with a Conscience – A Dublin Based Organic Initiative 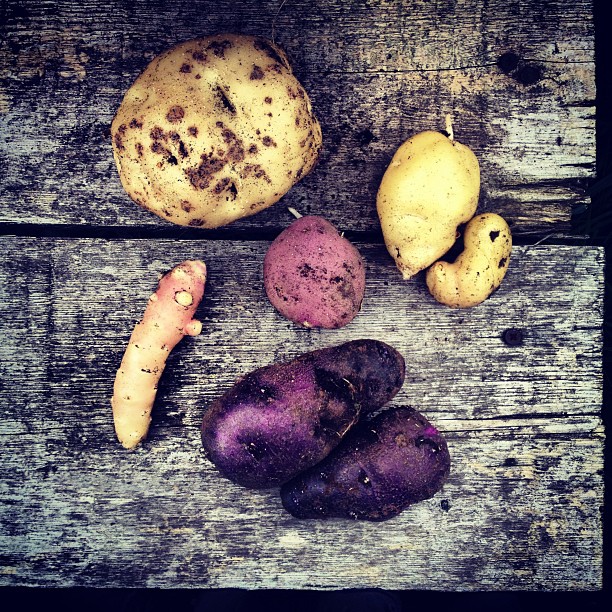 Kaethe Burt O’Dea, a healthcare design researcher living in Dublin, began the community garden on Sitric Road in Stoneybatter some years ago as a way to help bring the residents together and develop more sustainable practices for food production at a local level.

Many Dubliners will already have heard of ‘Sitric Picnic’, a small festival that grew out of this little plot and brings together local music, art, composting, seeds, board games, face painting, food and people. And it’s got a  ‘Zero Waste’ policy – BYO cup, plate and cutlery and take them home after!

But one of the most recent projects evolving there is ‘Crisps with a Conscience.’ This tasty idea formed organically from their SPUDS project. SPUDS was a way to encourage people to question the idea of genetically modifying potato crops to make them blight resistant and to look for alternative solutions. SPUDS had growers all over the country trying out a naturally blight resistant crop. Not only did the crops avoid blight in one of the country’s worst years for the disease, but the taste tests were hugely positive.

Crisps with a Conscience took things a step further and began to look at how crisps are made and how many potatoes are thrown aside for being “the wrong size or shape”. Their first trial took place last summer. Not only was the packaging environmentally friendly and biodegradable, but happy customers delighted in the fact that they “Tasted like potatoes!”

Crisps with a Conscience is due to launch around the country later this year, with packs including educational infographics and blight resistant seeds to encourage kids to learn about what really makes a great potato and a great crisp.

If that’s whet your appetite for more information check desireland.ie.