Crop Circles & Squares, The Shapes of Our Interpretation, By Geoff Fitzpatrick 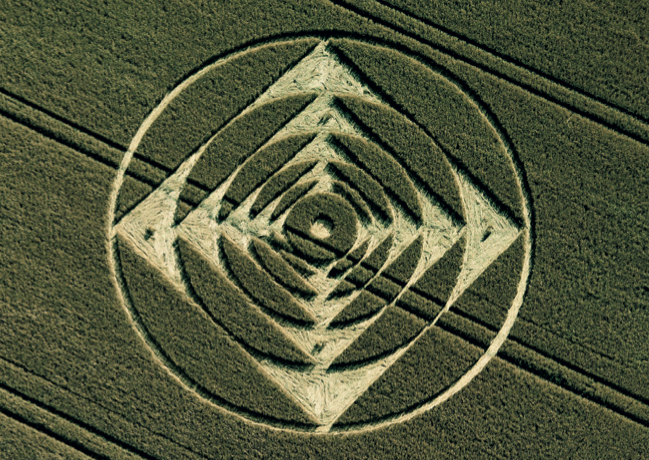 The shapes of our interpretation.

Crop circles have an ability to deliver strange experiences. One of the more memorable ones I’ve had is linked to one of the central teachings in my mandala workshops – the relationship between the square; representing rationality, certainty, the knowable, concrete and earthly and the circle; representing the irrational, unknown, unseen, intangible and heavenly. How do we use these approaches to interpret events in our lives?

A friend invited me on a road trip to an ancient site of Stonehenge near Wiltshire. With a near-magic chemistry electrifying our conversation we began to share our passion for geometry, crop circles and consciousness. So passionate am I about the square and the circle, that my friend referred to me “continually banging on about it”, on a specific stretch of road.

Two days later, a large crop circle of only squares and circles appeared in that very stretch where I was “banging on” about these principles.

If I interpret this event through the square qualities of my mind, I would say, “Well it’s nothing special, the square and circle are common symbols in crop circles. Stonehenge is a popular location where formations appear, it is nothing more than a simple coincidence.”

If I interpret it through the circular aspects of my being, I would observe different things. I have never visited Stonehenge before, there has never been, as far as I know, a square/circle formation there. It was right at this spot where I spoke about something I am incredibly passionate about, we had even popped out of the car and scanned those fields from the fence. Above all, I feel an extraordinary personal connection to the event.

Meditation for Balancing the Chakras