Our Summer 2019 Issue Hits the Shelves

Great news, Positive Lifers! Our Summer 2019 issue is hitting the shelves this week, featuring an exclusive interview with renowned Indian mystic Sadhguru, who told us all about his Inner Engineering programme for peace and self-realisation. We also got to chat with Ruby Wax about her latest book, ‘How to be Human’, for which she collaborated with a neuroscientist and a Buddhist monk. The book is aimed at helping you to ‘upgrade your mind as much as you’ve upgraded your iPhone!’ Other highlights include an interview with Judy Satori – Language of Light pioneer – delicious recipes from The Happy Pear twins, an in-depth look at how microbes can heal, and oodles of inspiring content from our regular contributors. Click here to find your nearest stockist, or here to subscribe.

If you’re looking for some truly high-octane inspiration and insight this New Year, you need to check out the Pendulum Summit, taking place on the 9th and 10th of January 2019 in the Convention Centre Dublin. It is the world’s leading business and self-empowerment summit, offering a life-altering experience to all who attend. Read on to learn all about it! And make sure you check out our competition on Facebook, where we are giving away a ticket to one lucky reader. 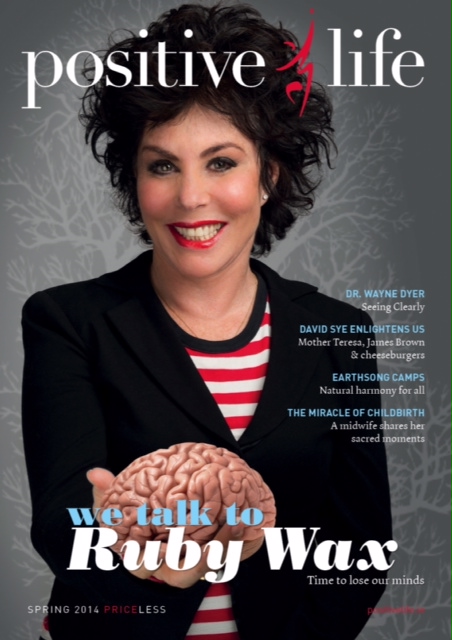 Ruby Wax is currently on tour in the UK. We caught up with her to find out more about Oxford, neurons and mindfulness.

You may think you’ll feel better if you get more money, buy those jeans, finish reading this article etc. But that doesn’t ever stop, does it? One of the most excellent things about life is that there is always more to do and learn. But when you see someone given a promotion and they don’t take a moment to pat themselves on the back, because they’re already worrying about their increased responsibilities, or your friend meets an amazing potential partner and is freaking out because it might not work out, while simultaneously freaking out because it could, you begin to wonder what all the panic is about, and how to stop it.

Ruby Wax refers to this as needing to “cool our cortisol”; a chemical produced in our brains as a response to fear. Ruby studied the brain at Oxford for two years. “I had to. I’m obsessed with the reality of things,” she tells us.

Cortisol helped us when we needed the internal ‘fight or flight’ kick for survival but we have the same physiological response to someone not accepting our friend request. “It’s really good, it got us going, it got us inventing but it can also knock you dead. I’ve seen therapists and I don’t want to have to endlessly run to them. I haven’t had a depression in seven years.”

But she never expected that mindfulness would be the answer. 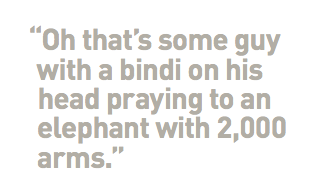 Speaking at The School of Life Sunday Sermon, Ruby explained that because of neural plasticity, we have the ability to re-wire our brains, “So I thought, how do you regulate this stuff? And it turns out mindfulness, which I would never would have done in a million years, because I keep thinking “Oh thats some guy with a bindi on his head, worshipping an elephant with 2,000 arms” but it turns out that has the best results.”

“It’s not something I thought up on a weekend,” she tells us, “Thats the way it is. You can watch neurons wiring and unwiring and chemicals switching on and off because the person is doing it intentionally.” 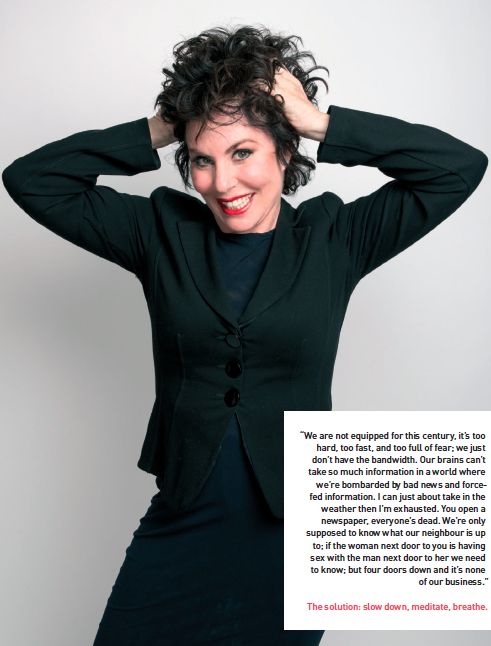 “We are not equipped for this century, it’s too hard, too fast, and too full of fear; we just don’t have the bandwidth. Our brains can’t take so much information in a world where we’re bombarded by bad news and forcefed information. I can just about take in the weather then I’m exhausted. You open a newspaper, everyone’s dead. We’re only supposed to know what our neighbour is up to; if the woman next door to you is having sex with the man next door to her we need to know; but four doors down and it’s none of our business.” – The solution: slow down, meditate, breathe.

She also told us Ireland is her favourite place to perform and why, “The people have a great sense of humour, they’re ironic and dark. That’s my type, so I can’t wait to be there.”

1. Ruby says she’ll do it sitting in the back of a taxi. Try it on the bus or waiting in a queue.

2. Notice everything going on around you, notice the sounds and what’s going on in your mind.

3. Bring your attention to your breath and stay with that. Pinpoint focus on your breath.

4. Feel your breath in your whole body from your feet to your head.

5. Tip for technology Learn your limits. Understand that it’s an addiction. You don’t have to do 250 things. Do what you have to do but then cool down. We made technology, it’s not going away, but you have to make your own breaking system.

Ruby’s book Sane New World is out now and her latest show, of the same name, will be in Ireland this April. rubywax.net

Pick up a free copy of Positive Life in any of these health food stores and holistic centres around the country. If you’d like the magazine delivered quarterly, you can subscribe here.