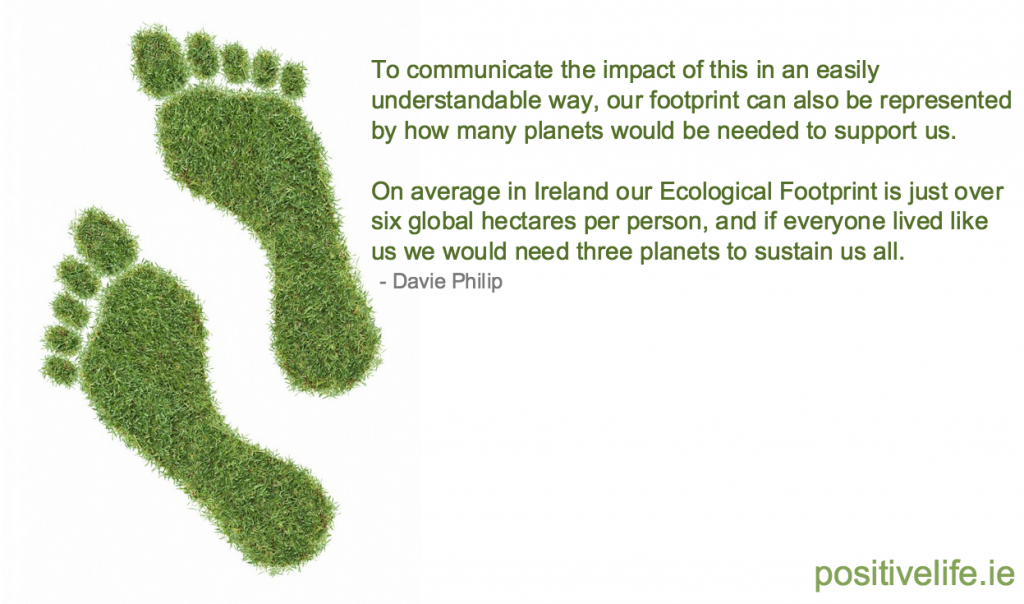 Our planet provides everything we need to flourish. However, since the 1970s humanity has been consuming natural resources at a rate that exceeds the Earth’s capacity to sustain us. It is estimated that to support everyone’s current lifestyle globally we would need 1.5 planets. There are, however, significant differences between rich and poor countries; if we all lived like an average American we would need five planets. According to WWF’s Living Planet Report, Ireland has the 14th largest eco-footprint in the world.

An Ecological Footprint is measured in global hectares (gHa), the area of productive land and water required to support our consumption and deal with our waste. To communicate the impact of this in an easily understandable way, our footprint can also be represented by how many planets would be needed to support us. On average in Ireland our Ecological Footprint is just over six global hectares per person, and if everyone lived like us we would need three planets to sustain us all.

…Recently, the Cloughjordan Ecovillage, which has 140 residents, had its Ecological Footprint measured by Dr. Vincent Carragher of the Tipperary Energy Agency. Along with the University of Limerick, he has developed a rigorous Community-Based Ecological Footprint assessment tool. The analysis shows that the Ecovillage has a footprint of 2 gHa per person, which is a third of the national average and equates to just over the capacity of one planet.

Read the rest of the article in the print Spring 2015 issue of Positive Life. Stockists | Subscribe

Davie Philip is a facilitator and trainer who manages the Community resilience programme at Cultivate living and learning. He is based at the Cloughjordan ecovillage and is a board member of GIY Ireland. davie@cultivate.ie

What is Homeopathy? By Elinor Hitching