Now Trending:
Positive Nights Presents: Oracle Girl – The New...
Truth, Love and Community: Breaking Out of Our...
Mooncup: Simplifying Periods
Thrive On: The Documentary With An Empowering Dream
We Recommend: CNM’s Immune Boosting Webinar
My Family Healthcare Toolbox: What’s True for Me
Luxury for the Hair: We Review Dr. Hauschka’s...
Five Truths for Every New Mum and Dad
Mobility Medicine: Amatsu to Free Up Movement
Truth Or Dare: The Pros and Cons of...
Positively Newsworthy: The Little Things – Autumn 2020...
The Chemistry of Life: Healing With Bio-kinesiology
The Power of Our Life Force: Pranic Healing
The Wisdom of Adamus: An Interview with Geoffrey...
‘Patterns, Placements and Potential’ by Rachelle Hicks
Seed Saving in 2020: Securing Our Future
Inspiration from Joe Dispenza: Breaking the Four Minute...
Announcing: Our New Patreon Community
Turn Over a New Tea Leaf
Deva Premal Nominated for Grammy Award
We Recommend: Health Coach Discussion with CNM
Interview with Martin Duffy – Director of The...
Positive Nights: The Promise and Challenges of Psychedelic...
Doreen Virtue: The angel author shares her transformational...
Mindfulness Based Stress Reduction Course with Eilis Cullen
Tantric Massage
Home Food & Recipes Who Knew Getting Bitter Would Be Good for You?
Food & RecipesHolistic Health

Who Knew Getting Bitter Would Be Good for You?

A Flavour for Balance 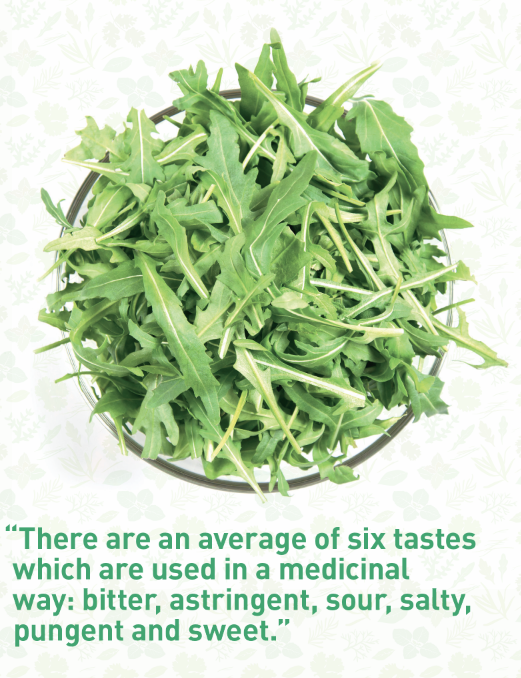 Long before the advent of science labs, mass spectrometry/gas chromatography and isolated compounds, the traditional medicine man or woman relied on the art of taste to decipher the quality and use of a plant. Now, I’m sure there may have been a few human casualties along the way as some of the most potent toxins come from the plant world, but the essence of this art is still used today, and now. combined with the knowledge of the science labs, we’re able to understand and utilise plant properties without the casualties!

All of the worlds herbal traditions, from Ayurveda to TCM, Native American and our own Irish Herbalism use a system of communicating through taste and using that taste essence return our bodies to a state of balance. Through scientific research, we can identify phytochemicals that correlate to these tastes and to justify and rationalise our use of these plants. But we must take our hats off to our ancestors who had this art all figured out long before we all came along!

There are an average of six tastes which are used in a medicinal way; bitter, astringent, sour, salty, pungent and sweet. In this particular article, we’ll be getting bitter! Since that taste is probably most lacking and most beneficial to the typical Irish diet.

Bitters are a flavour and phytochemical component in foods and herbs that exert a very specific action on the digestive system. We have overloaded our taste buds with so many synthetic additives, preservatives and sweeteners that no one likes to taste that bitter flavour anymore, when it’s so crucial to the efficiency of our digestion. On stimulation of the bitter receptors in our tongue, a message is sent to the brain to release a myriad of digestive enzymes from the mouth to the stomach, pancreas and liver.

Bitters stimulate the secretion of the hormone gastrin, which regulates the production of gastric acid. Inadequate stomach acid will prevent the uptake of minerals, which in turn can rob the body of essential nutrition, even if those nutrients are being consumed as foods or supplements. Low acid also weakens stomach tissues, and is often the foundational cause of oesophageal reflux – though most people mistakenly believe they have too much acid. As we age and due to stress and eating on the run, we have a tendency to actually produce less stomach acid.

Bitters act on both the pancreas and liver/gall bladder, helping to normalise blood glucose levels, and promote the production and release of pancreatic enzymes and bile, which ensure good digestion of fats and oils. From a traditional energetic perspective, an out-of-balance liver can be associated with anger and frustration, and bitter herbs can often be a part of a prescription to help balance this energetic symptom of liver congestion.

So where do we find this bitter? Chicory, endive, mustard greens, watercress, wild dandelion leaves, dandelion root and rocket are all good bitter foods and can be eaten in small amounts with a meal to have a therapeutic action. This is where the ‘salad before a main meal’ concept came from.

We also have some very bitter tasting herbs, Gentiana lutea (Gentian), being one of the most bitter. Barberry, Dandelion root, Centaury Goldenseal, Yarrow and Yellow dock are other examples, though they have varying degrees of bitter principles and other synergistic attributes too.

Bitter tinctures can be used in smaller doses 10-15 minutes before a meal to stimulate the digestive juices, but are also added to a formula in larger amounts for a cooling, detoxifying and antimicrobial effect. The cooling effect needs to be balanced for a certain type of constitution as it may be too cooling and drying for some types.

It’s interesting that the bitter flavour is one we often avoid and much like the bitter side of our emotions, may perhaps be better faced up to, acknowledged and thanked for the lessons in life and in medicine we can learn from them.

Stories for Change – Creating a Narrative That Matters